Yoga craze catches on in Russia 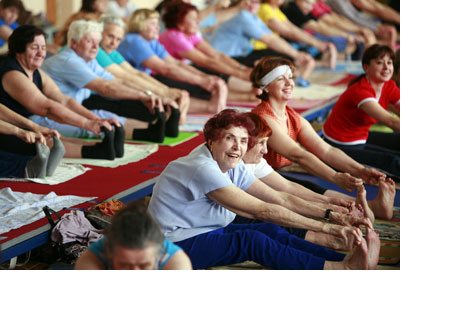 Prohibited during the Soviet era due to its connection withHindu religious practices, yoga is becoming more and morepopular in Russia

Once outlawed and dismissed in the Soviet era as voodoo and Eastern mysticism, the Indian practice of yoga has struck a new chord in Russia, thanks to the tireless efforts of Vasily Brodov, forging yet another cultural bridge between India and Russia.

Who are yogis? "Indian hermits who can sleep on beds of nails, tie themselves into knots and stand on their heads," — this is how Russians would have described yogis twenty years ago. But this exotic portrait of yoga and yogis is now passé. Today, yoga spells chic as more and more Russian youth get hooked on to this unique Indian practice of physical and spiritual self-discipline. No trendy fitness club in Moscow or other major cities can do without a yoga instructor and one may even find queues for buying yoga mats at sport shops.

Prohibited during the Soviet era, there are at now at least 100,000 people who practice yoga regularly in Moscow and St Petersburg alone, according to the Russian version of Yoga Journal. One of them is the youthful and handsome President Dmitry Medvedev! In an interview to Tainy Zvyozd (Secrets of the Stars) magazine, Medvedev said he can even do a headstand (‘shirshasana’), triggering a surge of enthusiasm among long-time yoga fans and neophytes.

Seeing the popularity of yoga in modern Russia, not many will believe that the practitioners and advocates of yoga were once persecuted and even paid for it with their job. And few will remember pioneers like Professor Vasily Brodov, the first chairman of the Yoga Association of the USSR, who braved the wrath of the authorities and popularised this Indian practice with the zeal of a believer.

A native of Moscow (1912), Brodov graduated in philosophy at the Moscow Institute of Philosophy, Literature and History in 1938, but he never even dreamed that India would become his life-long passion and even obsession. Being a restless intellectual who participated in "dissident" gatherings, the young professor of philosophy soon earned the ire of the authorities and was consigned to the infamous Gulag prison camps at the start of World War II. Brodov continuously asked to be sent to the front. Subsequently, Brodov, along with other prisoners, was thrown into the front lines in penal battalions. In an artillery unit, Brodov marched from Ukraine to Berlin and miraculously survived.

Prison and fierce battles behind him, Brodov thought he was heading for a new start in his life, but he was pushed around from one institution of higher learning to another and was deemed "unreliable". The talented exile, however, managed to become a lecturer at the department of dialectical and historical materialism of the natural sciences division of Moscow State University (1962-1966). It was here that he came to know India and wrote his doctoral thesis, "Progressive social and philosophical thought in India in the New Era (1850 - 1917)". It proved to be a breakthrough not only in Soviet Indology, but was also recognised by German Indologist Walther Ruben as the first systematic research into the history of Indian philosophy in the late 19th and early 20th centuries.

Since then, there was no looking back. In the sixties, he met two outstanding Indians who fired his passion for Indian philosophy and yoga. He met then India’s President S. Radhakrishnan in 1964 at Moscow State University and presented him a copy of "Ancient Indian Philosophy: The Early Period", the first in the series "Philosophical Heritage" comprising translation of the ancient Sanskrit texts of the Upanishads into Russian. In 1966, he helped organise the six-volume "The History of Philosophy", which was published in full version in 1965.

Around the same time, Brodov met renowned Indian guru Dhirendra Brahmachari, when he was invited to the USSR to give the cosmonauts lectures and practical lessons in closed sessions. Interacting with the guru, mastering the asanas and pranayama worked miracles on the former frontline soldier's health.
Brodov’s bond with the yoga was sealed, and from this point onwards, he tirelessly promoted what he called the "fruit of the creative genius of the Indian people", even in the face of official disapproval.

"Vasily Brodov stood at the epicentre of the struggle for official, albeit indirect, opportunities to study and promote yoga in the USSR," says Viktor Boiko, who now heads the School of Classical Yoga in Moscow and boasts of many students in Russia and abroad.

Boiko, who established a popular yoga website on the Russian language Internet, recalls the writing of "The Teachings of Indian Yogis and Human Health in Light of Modern Science" published in "Philosophical Issues in Medicine" in 1962, with the approval of the ideological department of the Central Committee of the Soviet Communist Party. This became the first official publication on yoga since the death of Stalin and under the Soviet system, in general, making it unique, says Boiko.

This opened the door to a flood of articles on Indian yogis in authoritative publications. Brodov later co-produced the documentary film “Indian Yogis. Who are they?” distributed in the USSR in 1970, which led to an explosion of interest in yoga and in India itself.

However, the film had not been approved by the authorities and was shelved for years. "The official line was that yoga, from the point of view of philosophy, is idealism, religion, mysticism, and in practice, it is quackery, hoodoo and acrobatics,” wrote Brodov, adding that senior officials called yoga the “propaganda of idealism and religion".

In the early 1970s, a group of scientists and public figures, including Brodov, wrote an open letter to General Secretary of the CPSU Central Committee Leonid Brezhnev and Chairman of the Council of Ministers of the USSR Aleksey Kosygin with a request to legalise yoga and establish a yoga therapy scientific research institute. But the initiative did not make any impact.

"However, not all Soviet people shared the opinion and motives that led to the ban," recalled Brodov, during his tenure as the president of the USSR Yoga Association, which was established in 1989. "Many people practiced hatha yoga on their own at home and in private. Translations of foreign literature, the so-called samizdat (the secret publication and distribution of government-banned literature ed.) served as instructional aids.” Following the perestroika years, yoga health groups started popping up everywhere. “Among the leaders of the groups, the more enlightened and gifted ones became real teachers and gurus."
More than any dry thesis, Brodov’s narration of his first-hand experience converted many sceptics to the cause of yoga. He writes:

"Yoga is a system of self-regulation and self-improvement of the personality, and here I can refer to my own experience. I returned wounded and ill from the front lines in 1945. The doctor who prescribed my medicine reassured me, 'You've got another 10 or 15 years to live...' Unfortunately, the medicine helped very little.”
“Illnesses became more acute: cardiac insufficiency, radiculitis, salt deposits, kidney stones and many others forced me to try hatha yoga. Studying primary sources and consulting with Indian experts helped me master the elements of this physical therapy.”

“As a result, all of the ailments that were troubling me disappeared. They disappeared without the aid of doctors or medicine. Today, at 78 years old, I give my heartfelt thanks and deepest respect to the great people of India for giving yoga to humanity."

Today, millions of proponents of yoga in Russia would concur.