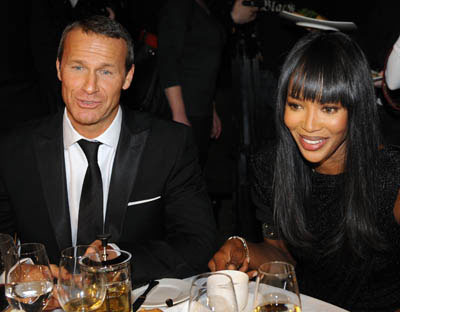 Naomi Campbell with her boyfriend Vladislav DoroninPhoto by ITAR-TASS

Let’s talk about Russian men. A strange new tendency is in evidence: more and more Russian men are looking for a bride on the side — that is, abroad.

According to Moscow’s Registry Offices, 204 men married foreign women last year. The geography of these women is impressive: English, American, German, French… Russian dating agencies are no longer surprised by a Russian man in search of a foreign wife. But what is it that these men can’t find here? To answer this question just go to the nearest Internet forum devoted to discussions of the advantages of marrying non-Russians. “European girls are modest, they don’t wear tons of jewelry and tons of make-up,” writes Sergei. “They won’t look down on you if you don’t own a Mercedes and don’t work in a bank. And they will pay for themselves in restaurants.”

The main complaint about Russian girls is this: if they’re young and beautiful, they’ll milk you for money, demand presents every day and expensive entertainment, like trips abroad. If they’re over 25, they’ll be constantly bringing the conversation around to marriage and practically dragging you to the Registry Office.

It’s not a nice picture. Then again, Russian women could counter every one of these complaints with arguments of their own, but that’s not the point here. Especially since the principal shortcomings of Russian men have gotten plenty of press. Since the collapse of the Soviet Union, Russian women have had an uncontested advantage in the fight for a place under the happy and prosperous European sun. The brand called Girls and Women from Russia is well known in the West and highly successful. Our men, in this sense, haven’t been anywhere near as lucky. They have been written off as alcoholics and criminals, almost every last one of them. I somehow suspect that Russian women who have taken permanent residency abroad have had a hand in creating such an awful reputation for them. These women had to somehow explain to themselves and others why they never had much of a love life at home. And they certainly didn’t want to blame themselves.

But recently this situation has begun to change. I think that Russian billionaire Mikhail Prokhorov, who for years inflamed the French ski resort of Courchevel, had no small part in destroying the stereotypical image of the Russian man as sullen and aggressive. Prokhorov may have overdone it a bit. I remember that the French police accused him of having too many young and beautiful women in his entourage, but one can hardly blame a person for being drawn to the fair sex.

Hollywood, too, seems to have taken a shine to Russian men. The real breakthrough in this respect was Mikhail Baryshnikov in the role of Carrie Bradshaw’s latest love on Sex and the City. Things may not have worked out for them, but I have no doubt that many women dreamed of being in Carrie’s place in the company of that “strange Russian”.

Finally, our main answer to all slanderers and envious people is Vladislav Doronin who for over two years now has been the boyfriend of top model Naomi Campbell. In my opinion, Mr. Doronin should demand that the Russian government pay him a commission for his work in creating a positive image of Russian men abroad. He’s in good shape, well built, speaks several languages and is very generous — the press is always writing about his latest present to Naomi. He’s the man of some woman’s dream.

To be honest, there are good reasons to love Russian men. They have big hearts, are given to making nice gestures and romantic surprises for their beloved. An impromptu weekend in Paris, a gorgeous bouquet delivered to her third-floor balcony, I LOVE YOU painted on the asphalt under her windows — all of this is very Russian. A Russian man will always try to surprise his lady love and prove to her that she chose him for good reason. And she’ll never know a dull moment with him. True, this all relates to what is known as the “candy-and-flowers” period. Once they start living together, and certainly after they’re married, the picture is a little different. European women should beware that for a Russian man the most important qualities in a wife are her ability to keep house and be faithful. That’s what the opinion polls say anyway. So they’ll have to learn to make that borscht.

In conclusion, a vignette about relations between the sexes in Russia. At first glance, it seems to be about women, but actually it’s about them, about our dearly loved men. So then, a Russian woman returns home after a long hard day at work. As usual, she is carrying heavy bags of groceries. She makes dinner, feeds the children, checks their homework, plays with them and puts them to bed. Late that night, her husband arrives home from work, as usual not entirely sober. She gives him dinner, washes the dishes and finally, when she’s finished with her housework, calls an unmarried girlfriend. Her girlfriend tells her how she spent her day: she had a date with her latest admirer, went to the movies, then had a delicious dinner out, and now she’s lying in her bath with a flute of champagne. “Yes,” sighs her married friend, “when I think of you there all alone, it makes my heart bleed.”