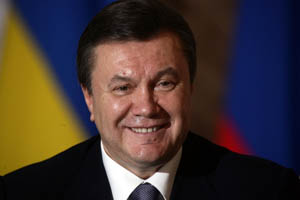 "If we decide to begin talks [about the merger] we should include the EU at a certain stage as the main consumer of gas and the main partner," Yanukovych said, according to The Moscow Times.

In his first public comments on the merger since Putin floated the idea during meetings with Ukrainian officials, Yanukovych said, "The most important thing for Ukrainian national interests is that its gas transportation system is reliable."

A subsidiary deal to the $40 billion gas discount Russia has handed Kiev is a badly needed project to upgrade the aging pipeline network. Ukrainian leaders had been lobbying both Brussels and Moscow for help to pay for new pipes, and Ukraine has made it clear that it would rather work together with both Russia and the EU rather than favoring one over the other.

The politics of the upgrade are also complicated by Russia's plan to build a new pipeline called South Stream that would deliver gas to southern Europe and bypass Ukraine completely. However, analysts have questioned the economic viability of this project, and an expansion of the Ukrainian pipeline network would be a far cheaper option.

Russian Government spokesman Dmitry Peskov said last week that the deal would most likely take the form of an equity swap between the two firms. Gazprom may use about 5 percent of its own shares to acquire Naftogaz, Kommersant reported Tuesday, citing Peskov.

Analysts have pointed out this is unlikely, as it would reduce the state's stake in Gazprom to below 50 percent, which is banned by Russian law. Other analysts have suggested that if the deal goes ahead, a joint venture of some sort is much more likely.

Naftogaz said Wednesday that it paid more than $419 million for April gas imports from Russia, which included a discount of $100 per 1,000 cubic meters of fuel.

Still, the deal is not a sure thing. Putin knew this agreement was going to be hard to negotiate and even harder for Yanukovych to sell, but should the deal go through, it would go a long way towards ending the fears over energy security for western Europe as well as giving cash-strapped Ukraine access to more money than gas sales currently generate.

Ukrainian Prime Minister Mykola Azarov was cautiously positive in statements on May 5, obviously suggesting that Moscow should supply more details.

"The proposal merits attention. We'll naturally examine it because it was made by the prime minister of a very large state, our neighbor, out of good intentions," Azarov said.

Gazprom CEO Alexei Miller said the energy ministers of Russia and Ukraine would meet in Moscow with the management of Gazprom and Naftogaz after the May holidays to discuss the details of a possible merger.