A tenacity to remember 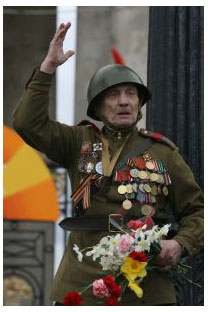 Every nation has its own vision of World War II. And obviously every nation focuses its remembrance on its own contribution. For Americans, the recollection centers on Pearl Harbor, the beaches of Normandy, D-Day and raising the flag at Iwo Jima.

In the United States, the war began with an attack on Pearl Harbor, but on that day in December 1941, Soviet troops were already engaged in a fierce battle in the snowy outskirts of Moscow. The tenacity of the Russian people and their role in stopping the march of Adolf Hitler’s army is generally not well known in the West.

The Battle of Moscow, where Generals Zhukov, Rokossovskiy, Vlasov and so many average soldiers mysteriously stopped the Nazis in the neighborhoods of the Russian capital, was a breakthrough that many historians are still unable to explain. It was a miracle that some have chalked up to the frosty Russian weather, or even to the difference between Russian valenki (felt boots) and German leather boots.

The battle of Stalingrad, where the Soviets crushed the German 6th Army, is also important to military historians, but not well-known to the American public, although it was the turning point for the war on the eastern front.

In a popular book on French cuisine (Lunch in Paris, A Love Story, with recipes by Elizabeth Bard) I found a quote that caught my eye: “On our way to the restaurant, we passed the Stalingrad metro station. “Why is there a metro in Paris named after a city in Communist Russia?” – I asked. “The battle” – he said, looking at me like maybe I was speaking Russian. “When Stalin defeated Hitler on the Eastern Front.” Duh. It was only the moment that turned the tide of the entire Second World War, saving France from permanent occupation and humiliation by Nazi Germany. There was no metro station named D-Day.”

An American in Paris could not imagine that there could be a more important battle than D-Day.

In Tom Brokaw’s book “The Greatest Generation,” there is a brilliant collection of individual stories of individual men and women, American citizen heroes and heroines who came of age during the Great Depression and the Second World War. However, the role played by America’s Soviet allies is largely ignored. Brokaw’s book, which was recently translated into Russian, has only one mention of Russia – describing the greatest generation standing “fast against the totalitarianism of their former allies, the Russians,” in their post-war lives.

”I was much more concerned about the prospects of the Cold War than the lessons of the war of my early years,” Tom Brokaw has said. It would be good if such a recognized celebrity could look a little deeper in his evaluation of the greatest generation. Certainly the Cold War and Stalin’s policies have erased from the public mind in the West the scale of losses and the amount of heroism that Russians demonstrated in the war years, 1941-1945. Today it is more popular to speak about how Russian soldiers raped German and Polish women, or imposed the Soviet regime on the Baltic States. No doubt it was true, but the world should not forget the words of Joseph Beyrle, the only American who escaped from the German prison camp and found himself in the midst of the Red Army, a man I had the honor to meet in 2004, a year before his death.

In an interview with Russian TV, he said: “I hear a lot about the atrocities that Soviets committed on their way towards Berlin in Germany. I don’t remember that. I only remember their determination to reach Berlin and to see the victory.”

As we celebrate Victory Day in America, we should not forget about Stalin’s crimes and his merciless regime, but we should also remember the simple Russian soldiers, the lowly first lieutenants, who went through the battles near Moscow, Stalingrad, Kursk, Kiev, Warsaw, who opened the gates of Auschwitz, and, after all entered Berlin first, and who carried the burdens of what they experienced in the war throughout their lives. While we are talking about the atrocities of the Soviet regime we should not forget that it was Nazi Germany who started the war against the Soviet Union in June of 1941, and that it was the Soviet Union who won the war against Nazi Germany in May of 1945, with the support of American industrial power and Russian human resources combined. I remember the late Congressmen Tom Lantos who said at a press conference in Interfax, while he was in Moscow, that he would like to see the monument to the Soviet soldier in the every city liberated by the Soviet army. These words were spoken by a man who was liberated from the concentration camp in Hungary in 1945 by the Red Army, and whose words are worth remembering.

Peter Cheremushkin is the Washington, DC correspondent for the Interfax News Agency.