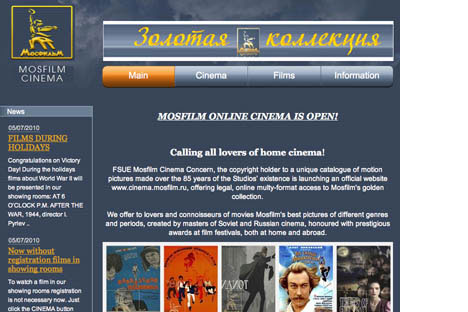 Mosfilm has launched an historic Web site www.cinema.mosfilm.ru, which is likely to become Russia’s first legal internet theatre. The cinema is making a strong pitch for western audiences, with the majority of films subtitled in English and other languages.

Many of Russia’s most powerful films of the past two decades have not made it to western screens, due to a lack of subtitles and poor distribution.

Since its soft launch a few weeks ago, more than one hundred Mosfilm productions have already been posted from the studio’s archive. For now, the cinema is showing two-three films per week on a trial basis. But by summer, Mosfilm said it will offer screenings from morning until night and vastly expand its repertoire of films.

The authors of the project hope to be able to compete with network pirate resources that offer the same service by offering better quality, a powerful server and an online signal channel that will spare the viewers irritating buffering.

Ultimately, the films will be viewed in three ways: Free online according to a posted schedule, online at any time for 25 rubles or less than a dollar, or by downloading a film for 65 rubles or a little more than two dollars.

Vladimir Shaidakov, Director of Cinema House, believes that Mosfilm’s well-known brand will attract an audience. “Today’s viewer needs a quality product and has no time to surf the Internet in search of portals where he can watch a film comfortably. So, when faced with a choice between “Mosfilm presents…” and “Slob and Sons present…” he will opt for the former.”

Legal Internet cinemas have a bright future in Russia, experts believe. After all, only Moscow and Petersburg have large distribution networks, while the choice of films in the provinces is meager at best.

But is this really an international project? Will the Mosfilm brand garner a western audience? Russia watchers see here an opportunity for the brand to link up with Russian studies and film departments.