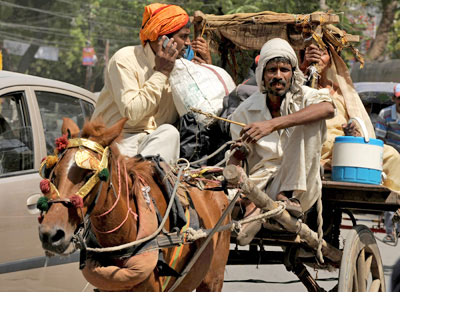 An auction that began in mid-spring will allow Indian and international companies to compete for the right to build third-generation mobile networks in India. However, a subsidiary of the Russian telecom giant AFK Sistema has begun offering services similar to 3G in the Indian market much before that.

The race for a slice of India’s lucrative telecom pie has just got hotter.

The main “perk” that comes with both CDMA2000 and 3G is high-bandwidth Internet access and all the opportunities that it brings. Web browsing speed under these standards is much greater than in earlier mobile networks; it nearly matches the performance of cable Internet. “The CDMA2000 standard, which we are promoting in India, allows us to offer data transfer services at a level that in GSM networks is only available to 3G users,” says SSTL’s president and CEO, Vsevolod Rozanov. Russian media reports say that SSTL has already built cellular networks using the CDMA 2000/800 in 11 of India’s 22 districts; its subscriber base approaches one million customers.

But given the huge potential of the burgeoning Indian telecom market, the Russian state is reported to be interested in backing SSTL with cash to help scale up its presence in the Indian market.

The Russian State Duma’s Budget and Tax Committee have recommended that the lower house of parliament okays the purchase of a stake in SSTL for $676 mn. The deal was supposed to go through last year. However, due to disagreements between Russian authorities, the money was not spent in 2009 and the 2010 budget does not mention any such expenditure.

The competition is intense. Until 2018, capital expenditures by the Indian subsidiary of AFK Sistema will amount to $2.3 bn, “an insignificant amount", according to Ilya Fedotov, director of the stock market analysis department at Veles Capital Investment Company. In comparison, one year before, Vodafone, which is also working in India, said it would invest about $2 bn in the market in 2008–10. “It is important to realise that an investment program implies not only application of funds, but also cost reduction. India is a very special country; a number of cellular operators work in the same state and there is a constant interplay of interests,” said Rozanov. “That’s why, for example, the joint use of infrastructural equipment is so widespread here: a number of operators can share one tower or one operator can buy traffic from another for subsequent resale to end users,” he added.

The cash infusion in SSTL would go a long way. Vladislav Kochetkov from Finam Investment company, notes that the whole idea of the Russian government purchasing a share in SSTL emerged during the crisis and that now AFK Sistema could probably acquire debt financing. “But since Russia is India’s strategic partner, its holding a share of the Indian subsidiary is still on Sistema’s agenda, as it will simplify lobbying in India,” he said.

According to plans made last year, after an additional share issue, the Russian government could own 20 pc of SSTL. Since local legislation does not allow foreign investors to own over 74 pc of the shares in telecommunications companies, AFK Sistema will have to reduce its share to 54 pc. To this end, India’s Shyam Group, which sold the controlling stake in SSTL to Sistema and which now owns 24 pc of the operator’s shares, will also take part in issuing additional shares. The group will buy 7 pc of the operator’s shares for $47 mn; the preference price of one share for Shyam Group is Rs 10 rupees, whereas Russia will purchase the securities for 49.3 rupees ($0.93) a share.

The transaction is to be credited against India’s Soviet-era debt, which approaches one billion dollars. According to an agreement signed by the two countries, Russia can use this credit solely for investments made on Indian territory. A spokesman for AFK Sistema noted that his company and other Russian firms do not work on Indian soil. This transaction is, therefore, a good opportunity for Russia to unfreeze funds that are currently of no use and invest them in a promising, developing business.

The attractions of the exploding demographics and increasing upward mobility in India are added attractions. Russian experts are upbeat: the country’s population is expected to exceed 1.5 bn; the real GDP growth should continue at one of the world’s highest rates (about 10 pc); telecom market volumes should double to $60 billion by 2014 and mobile penetration should increase from 29 pc in 2008 to over 80 pc in 2014.

With monthly growth rate of its subscriber base at 15 pc, SSTL has emerged as the most aggressive newcomer in India’s cellular market. This is an excellent performance, given the strong competition on India’s market, notes Boris Solovyov, deputy director general of ALOR Group. SSTL is the only company that holds an universal pan-Indian license for telecom services and frequency coverage of the entire area, with exposure to 1.13 bn people. However, at this point, the operator’s share, as estimated by the Telecom Regulatory Authority of India, does not exceed 1 pc. As of today, four billion subscribers use the services of SSTL. The biggest players in the Indian market are Bharti, with a share in excess of 22 pc and Reliance with 17.63 pc. SSTL has declared its intention to expand its subscriber base to 35 mn in 2012 and cover 7 pc of the market. “As of today, we can offer no predictions concerning the subscriber base. As far as financial indicators are concerned, we plan for SSTL to achieve positive EBITDA by 2013 and an increase in revenues to $1.5 bn by 2014,” said SSTL’s president. During the fourth quarter, Sistema Shyam TeleServices Ltd’s revenues reached $14 mn; for 2009 as a whole, they reached $36.4 mn.

This projected revenue growth would be possible only with a fresh influx of cash. AFK Sistema’s cash fund as of third quarter of 2009 was $7 bn with MTS accounting for $4.2 bn and Comstar contributing $290 mn. Funds available on Sistema’s accounts, however, do not exceed $2.6 bn. Although indicators suggest that SSTL plays an insignificant role in AFK Sistema’s earnings profile, Fedotov says, “Sistema will have a hard time developing its business in India without the support of the government.”

While different avenues are being explored to finance expansion plans of SSTL, it is still possible the Indian subsidiary may venture to raise funds on its own. Rozanov has indicated that an IPO is a possibility. AFK Sistema has stated that “company shareholders view an IPO as an instrument that could increase shareholder value. If a decision to conduct an IPO is made, a local stock exchange is likely be chosen as the primary exchange.”

SSTL is not the only Indian project of the Russian holding. Last year, AFK Sistema registered Sitronics India, another Indian subsidiary. Shipments of RUIM cards (analogues of SIM cards in CDMA networks) for SSTL have already begun (the contract amount for 2009 was about $3 mn). In addition, a three-year CRM & Billing system contract with the operator worth $64.2 mn has been concluded.

AFK Sistema is holding negotiations and consultations over the construction of emergency control centres, the establishment of coastal economic zone monitoring systems, security systems for municipal structures (“A Safe City”), and the introduction of state-of-the-art technologies using the GLONASS satellite navigation system. AFK Sistema is determined to make a success of its India dream. “India is nearly the only country in the world where an impressive market potential is combined with unique opportunities for investors,” says Rozanov.

AFK Sistema is the largest diversified public company in Russia and the Commonwealth of Independent States. Its principal shareholder, Vladmir Evtushenkov, owns 62.13 pc of the holding’s stock. Its net profits in US GAAP at the end of the third quarter of 2009 totaled $1.684 bn (gross: $5.3 bn). Its overall assets exceed $41.9 bn. AFK Sistema owns assets in the telecommunications sphere, real estate, banking business, tourism, medicine and high technology. Its strategy has been to create leader-companies in promising markets. Its shares have been listed on the London Stock Exchange in the form of global depositary receipts under the SSA ticker. The holding’s ordinary stock is traded on the RTS and MMVB exchanges as well as on the Moscow Stock Exchange. Moody’s has given the company a rating of Ba3, prognosis “stable”; the Fitch Agency has given the company a similar prognosis, but with a rating of BB. AFK Sistema is one of the first private companies in Russia to open an office in India.

Sistema Shyam TeleServices Ltd (SSTL) is a daughter company of AFK Sistema holding and the Shyam Group. The Russian side owns 73.71 pc of the shares in this Indian operator. SSTL was created in 1998. On 30 September 1998 it began offering mobile telephone services with the CDMA2000 standards. Today SSTL is licensed in all 22 of India’s telecommunications districts. In March 2009. Sistema Shyam TeleServices was given the opportunity to use the MTS brand in its image and advertising communications within India. As of January 2010 the company had some 3 mn subscribers. SSTL’s services are used by residents of Rajasthan, Tamil Nadu (including Chennai), Kerala, Calcutta, West Bengal, Bihar, Delhi, Karnataka, Mumbai, Haryana and Maharashtra. The operator’s subscriber base is growing at a rate of roughly 15 pc a month. By 2012 SSTL plans to expand its base to 35 mn subscribers, and by 2013 to achieve a positive EBITDA (earnings before interest, taxes, depreciations and amortisation).

The “Big Three” group of cellular operators in Russia include MTS, Vimpelcom and Megafon (see their logos on the picture)