Going to the Future, Part 2 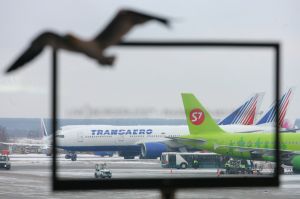 So continuing from my last post on the Future Gap, I would like to explore another example of new concepts taking off in Russia - the fledging no-frills market - specifically the latest low cost carrier, Avianova. The new low-cost carriers are a clear example of product offerings and concepts that have worked very well around the world and have since been brought to Russia. Now with Avianova, I can fly from Kazan to Moscow for 800 RUB ($25)(priced with no baggage). Their motto is to help Russians who have never flown and seen the inside of a plane, to fly and sample the air experience.

Avianova is a conglomerate of airlines brought together under one brand with a revised strategy of targeting the low-cost market. As I mentioned in the past, low-cost and competitively-priced goods and services work very well in Russia's small towns and cities as the salaries are low. The government had a hand in the consolidation, and I believe they choose the right direction to pursue. The site and branding are also quite good. I was able to easily navigate through the site, selecting options in English. The only downside is flight times, that are, at the moment are quite inconvenient. The only choice I had was to fly at 11:30 in the evening, arriving at a tired and blurry-eyed 1 am. It’s not great at all, but for the price, that is what you get. I believe with some forward planning the effects of leaving at this time could be minimized.

As seen over my two posts, the Future Gap covers plenty of concepts, many that are outside the realms of technology - I am talking about everything. The only catch is you can’t translate everything in the same way, and the pace of change is exponential. The best way to show this is in the language. If you took a standard Russian sentence and translated it word for word into English, people would probably understand it, but it would look and sound strange. One of the main requirements of any translator is to always preserve the meaning so it remains unchanged. Substitutes or additions/subtractions can used to ensure the meaning understandable and acceptable to the receiving party. The same thing applies here. Not everything can be translated part for part, section for section. In the majority of cases, alterations need to be made so it is acceptable locally. The pace of change is also extremely fast. An example of this is the number of Flash Sale companies starting up in Russia. In the US particularly, Flash Sales are seen as a growing lucrative trend, where dedicated online stores provide member customers with heavy discounts on various items at random times. Online companies started in Russia soon after they began in the US, highlighting that it sometimes does not take long for Russia to catch up. In short, some Russian industries or sectors will continue to lag behind international competitors for a long time, and other will catch up quickly or even evolve simultaneously. What makes the difference is the ability to see the Future Gap and try to bridge it as quickly and as effectively as possible. The majority of the opportunities I have been describing to investors over the last five days have been Future Gap ideas.

However being in the future does have it sets back…for one, lunches aren’t nearly as interesting! The Russian cuisine is an acquired taste, but it’s one I have come to really enjoy. Next week, I will explore some of the things I miss that will certainly include a healthy dose of Russian food! Ummmm yum!