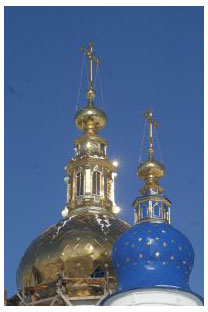 Prime Minister Vladimir Putin is atoning for the sins of the Bolsheviks — or delivering a heavy blow to Russian culture, depending on whom you ask. His government is pushing to transfer thousands of “religious items” fr om museums to the Russian Orthodox Church, a move that art experts and museum workers fear will lead to the ruin of important artifacts now preserved in museums and put many items off limits to the public.
Gennady Vdovin, director of the Ostankino Estate Museum in Moscow, said the clergy has frequently neglected church property in the past.

"There are a lot of examples when museum experts have found icons thrown out by priests in backyards," Vdovin told The Moscow Times.

The environment within churches poses another problem, as the smoke from candles used during services has a very negative effect on icons, he said.

The government is preparing legislation on the transfer of religious property that is scheduled to be considered by the State Duma this year, said Sergei Obukhov, a deputy with the Communist Party and a member of the State Duma's Social and Religious Organizations Committee.

The bill, however, has not been submitted to the Duma yet, he said.

But the restitution is already under way. Moscow's ancient Novodevichy Convent was transferred from the State Historical Museum to the Russian Orthodox Church last month in what Patriarch Kirill called “an act of historic justice.”

The Culture Ministry promised to model future transfers of museum property to religious organizations based on this move, which Putin ordered in January.

The Russian government remains the formal owner of the Novodevichy Convent, a UNESCO World Heritage Site, but the complex will be managed exclusively by the church. Were it not for the UNESCO label, the convent could have passed into church ownership.

The icons and other artifacts that belonged to the State Historical Museum will stay within the walls of the convent. But about 80 art experts, restorers and researchers will be evicted, said Vadim Yegorov, deputy director of the museum.

He noted that over the last 15 years, the only church personnel at the convent were 12 nuns.

The Novodevichy Convent was closed by the Bolsheviks in 1922, and in 1926 it became a branch of the State Historical Museum. From 1994, the convent regained its original function, with nuns and museum personnel sharing the premises.

The convent constitutes a part of the vast property that was expropriated from the church by the Soviet government, and the Russian Orthodox Church insists that it has a legal right to reclaim the property.

"A temple must be a temple, not a museum. An icon has its place — not in a museum, but in a functioning temple," said Archbishop Hilarion, head of the Moscow Patriarchate’s department of external relations.

Church representatives, including Archpriest Vsevolod Chaplin, head of the department for church and society affairs of the Moscow Patriarchate, have been allowed to work on the bill to transfer property from museums to the church.

But museum workers have complained that they are barred from participating in drafting the legislation.

In February, about 150 museum directors and experts appealed to President Dmitry Medvedev in an open letter, asking him to "speak against the ill-conceived and dubious initiative." Medvedev has made no public response to the appeal.

Then in March, about 40 renowned artists and art experts published an open letter to Patriarch Kirill, arguing that works of art needed to be stored by museums, not churches.

Chaplin stressed that the bill was lim ited to real estate and would not include items such as icons registered with museums.

"The bill covers buildings that are already being used by the church," Chaplin said in an interview.

But the publicly available draft of the legislation does not specify what kinds of property will be retained by museums, speaking only of "religious items."

Speaking on April 19, Patriarch Kirill called the public discussion “very low-grade” and said the church was perfectly capable of preserving treasures it owned for centuries.

Although only real estate is under discussion at the moment, the patriarch hinted that the church might stake a claim to museums' collections.

"We realize that the icons included in museum exhibits are intended for the spiritual enlightenment of our people, unlike those stored in collections," Kirill said, adding that there were also problems with museums' storage facilities.

The measures appears to have some support from Culture Minister Alexander Avdeyev, who has also said "icons are sometimes better preserved in churches than museums."

The state wants to transfer as many icons as possible, but only if their safety is guaranteed, Avdeyev told Ekho Moskvy radio. He said he did not expect the bill to empty museums of religious artifacts.

The government will cover all costs of preserving items transferred from museums, said Alexander Kibovsky, chief of the Federal Service for the Protection of Cultural Heritage. Religious institutions have already received 1.2 billion rubles ($41 million), he told Interfax last month.

But Engelsina Ugryumova, a senior expert with the State Historical Museum, insisted that artifacts were safer if they remained with museums.

"Giving away a religious object to the church means losing it in the nearest future because property like buildings may decay and fall into ruin due to negligence, while certain objects may be stolen for the lack of proper safeguards," Ugryumova said.

Museum specialists also worry about public access to cultural treasures, a constitutionally protected right that is nonetheless little used. Critics of the plan say the church may impede access after it receives the artifacts.

But church officials argue that museums, too, have been unable to provide regular access to their collections. Many items can remain in storage for years without going on display.

"It is true that museums don't display everything they have in storage, but the artifacts are carefully looked after," said Vdovin, of the Ostankino Estate Museum. "Museums are not the ideal option, but they're the best we have. We've lost a lot, but we are going to lose even more."

Many art officials say they have no idea why the current system needs to be changed so dramatically.

“For many years, church and museum personnel have been peacefully co-existing in museum-convents,” Ugryumova said. “It's hard to understand why the Russian Orthodox Church decided to abandon this favorable cooperation."

Museum staff interviewed for this article cautioned that the new bill had the power to cause a rift in society that could possibly lead to public unrest.

"There is an opinion that the conflict was triggered by someone within the Russian Orthodox Church who wanted to pit the Russian intelligentsia against the clergy," said Yegorov, of the State Historical Museum. "My son is a priest, and he says that not everyone among the clergy approves of the project, but the rigid discipline [of the church] doesn't let them speak out."

Museum workers linked the possible restitutions to the growing role of the Russian Orthodox Church in state affairs and its proximity to Russian leaders.

"Over the past few years, we have been witnessing a ‘clericalization’ of the country. We see how religious studies are introduced to school programs, while the prime minister and president are shown visiting Orthodox churches," Vdovin said.

Archpriest Chaplin said the real problem was commercial in nature, not social or political: The museums are reluctant to relinquish their lucrative real estate.

"They just don't want to move from prestigious premises with good locations that bring profit," Chaplin said. "We are aware of about a dozen such places now," he said, without elaborating.

Despite mutual accusations, the church and museums agreed that they shared a single goal of safeguarding the country's cultural heritage, which requires their cooperation.

"Cultural preservation is the cause of both believers and nonbelievers," Yegorov said.