Kargopol: Star of the Russian North 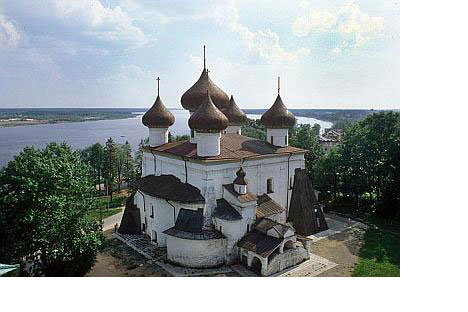 Among the many treasures of the historic Russian north, one of the richest is the town of Kargopol, located in the southwestern part of Arkhangelsk province. This small regional center of some 12,000 souls was founded perhaps as early as the 11th century. The town’s remarkable churches remind of its former wealth from the 16th until the 19th centuries, when it was part of a strategic trading route along the Onega River to the White Sea.

Kargopol’s historic core approximates its boundaries in the 16th century, and one of its charms is the concentration of museums and architectural landmarks within an easily accessible area. The town follows a regular grid plan dating from the time of Catherine the Great, with blocks of one and two-storied log houses, most of which are covered with plank siding. The windows display elaborately carved frames, and the eaves often have decorative cornices. In this town of merchants, craftsmen, clerics, and clerks, the carved decoration of wooden houses reflected a modest prosperity and way of life deeply rooted in tradition.

Strolling through little streets of wooden houses, the town's dominant landmark comes easily into view: A large bell tower built in the late 18th century near the Cathedral of the Nativity of Christ. The main part of the cathedral itself was built of local limestone in 1552-62.

On the eastern side of town, near an old earthen fortress, stands the large limestone Church of the Resurrection, which dates from the end of the 17th century in a style reminiscent of Russian cathedrals two centuries earlier. Nearby is Trinity Church, begun in 1790 and completed in 1802 in an unusual neo-Byzantine style.

The western side of Kargopol contains another group of temples, including the Church of the Annunciation, completed in 1692. Also built of local limestone, this imposing structure has tall windows framed with elaborately-carved ornamental detail. Next to it is the whitewashed cube of the 18th-century St. Nicholas Church, missing four of its original five cupolas. These churches formed the Old Marketplace, which is further enhanced by the lyrical beauty of the Church of the Nativity of the Virgin, completed in 1680 (now one of the town’s two functioning Orthodox churches). On the elevated western edge of town stands the latest of Kargopol's churches to have survived: The Church of Saints Zosima and Savvaty, completed in 1819 for a visit of Tsar Alexander I.

Like other ancient Russian towns that were bypassed by railroad construction, Kargopol sank into a deep torpor at the turn of the 20th century. Despite the destruction and vandalism of a number of its churches in the Soviet era, Kargopol has succeeded to a rare degree in retaining the graceful aura of its past.

The usual way to reach Kargopol is by the Moscow-Arkhangelsk train, which stops at Niandoma, 90 kilometers to the east of Kargopol. Private cars are available for hire at the Niandoma station. Kargopol has a small hotel, which was recently renovated. The rooms-some with private baths-are clean, and the hotel restaurant (open only in summer) is acceptable. It is also possible to arrange a home stay. For information on museums and tours, contact the Kargopol History and Art Museum (tel: 8-81841-2-14-96).