The curse of mobilization 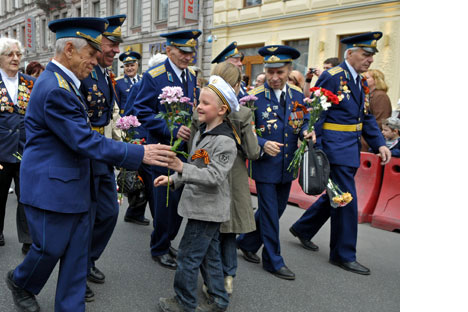 On the eve of Victory Day, 9 May, Vitaly Shlykov, an acknowledged expert on the Russian defense industry, spoke about the lessons of the Second World War.
Did Hitler have a chance of winning the war?

No. Commanders win on the field of battle, but it’s the economy that wins wars. The Soviet Union gained victory over Hitler’s Germany, above all, because of the superiority of its system for preparing the economy for war.

As a result of its industrialisation policy, as early as 1937, the USSR produced about 3,000 tanks, i.e. more than all the other countries of the world put together. This was known to Hitler. But he was unaware of the main thing: in 1937, the USSR already had the capacity to produce 70,000 tanks and tens of thousands of planes per year. Hitler himself later admitted that if he had intelligence on the mobilization capacity of the Soviet economy, he would never have attacked the USSR.

And what were the secrets of the Soviet economy?

The Soviet Union was a state that from the very beginning of its existence had been preparing for the inevitability of military confrontation with the rest of the world.

Before the second half of the 1930s, there were no specialised military industries in the USSR. In peacetime, only a small proportion of the industrial capacity was used for military production, but in the event of war, it could all be rapidly switched to defence needs. It was only on the eve of war that specialised industries began to be marked out – the basis of the future military-industrial complex.

The other “secret” was the planned economy. In 1943, the USSR was smelting only 8.5 mn tonnes of steel, compared to the 35 mn tonnes produced by Germany and its satellite countries, but we produced four times as many tanks as the Germans.

At the end of the war, Stalin, who was sure that new wars with world imperialism were approaching and was convinced of the effectiveness of the mobilisation model which had brought victory in the Great Patriotic War, continued to develop it. Subsequently, as nuclear weapons, ballistic missiles, nuclear-powered submarines and other arms appeared, which could no longer be produced by civilian factories, the Soviet model was supplemented by one geared towards the mobilisation-related production of arms already in service with the armed forces. Enormous reserve capacity for production of both these high-technology and highly specialised arms began to be created.

Incidentally, the Americans started off on the same path, beginning with the war in Korea (1950–1953), but turned off it in time. In the mid-1960s, they gave up maintaining their mobilisation capacity, not just because it was meaningless in the context of nuclear war, but also, and mainly, because its expense was undermining their competitiveness in world markets in relation to Japan and Germany. That’s why it was we who were defeated in the Cold War, and not them.

So you agree with those who believe that the USSR could not cope with the burden of its military expenditure?

Of course. If you produce 3,000 tanks but want to have the capability to rapidly scale up production to 70,000, you have to hold the appropriate industrial capacity and reserves: you must be able to extract the oil and coal and smelt the steel you need to produce and fuel 70,000 machines instead of 3,000. This was the Soviet model after the War. The capital investment in the so-called primary industries, i.e. in power engineering, steel, aluminium and titanium smelting and so on, was many times higher than that in purely military production. Thus, the surpluses in raw material and other materials were also military expenditure. And all the so-called civilian machine-building and consumer goods production existed in capacities intended for military production and worked on the raw materials, which in peacetime could not be required for purely the defence industry. Thus, the real “black hole” in the Soviet economy was the excessively inflated raw material and primary industries, which gave nothing either to the military or to the population. In the final analysis, the Soviet economy collapsed not because of overproduction of arms but because of the inconceivable overproduction of raw materials and intermediate materials.

Fine. I think we can see how the mobilisation economy at first saved the country in 1941–1945 and then ruined it in 1991. As far as I can see, for you, the concepts of “radical economic reform” and “defence conversion”, i.e. demilitarisation, are essentially synonymous?

When the war started in 1939, America had 9.5 mn unemployed and its army had 170,000 people and 200 tanks. During the war, 12 mn people were called up to the armed forces. Military production grew to a vast level (the Americans produced 300,000 warplanes, 100,000 tanks and 124,000 warships) and with a shortage of manpower, it drew in women, who traditionally had not worked in America before then. At the same time, military requirements led to the emergence of a completely new, high-tech industry: radar, electronic valves, computers, penicillin, etc. The production facility for the atomic bomb was the world’s first fully automated factory and so on. The USA spent 45 pc of its GDP on military efforts and did not undermine its economy at all.

So then, within two years, after victory, the Americans had practically ceased military production and sent their army home. There was neither unemployment nor a slump in production: just a small burst of inflation in 1948 and that was soon damped down. The economy began to grow rapidly, because all the resources and all the technologies that had accumulated in the military sector began to work on the domestic market.

This occurred because during the war, an enormous level of deferred consumer demand had developed. During the war, the USA had a rationing system; the production of cars and many types of domestic equipment was banned and housing construction was severely restricted. But people were still earning money the same way and putting it in the bank. They were the ones who financed the economic upsurge, which in the twenty years after the war turned the USA into a superpower.

Yes, the public’s savings at that point were worth many trillions of today’s roubles. I suggested meeting this deferred demand by using the power of the military industrial complex. After all, our economy was built on the same pattern as the American economy of the 1940s. It had enormous reserves of cheap raw materials and huge excess capacity. Of course, in terms of its structure and technology, it did not have the characteristics of a market economy. However, by then, it already had the basic components from which a modern economy is built: a sustained high level of education, advanced applied and theoretical science, powerful transport and energy systems and a major technical and technological capacity, concentrated in the military sector. Thus in many respects our real socialism (in effect, state capitalism) had been a system parallel to western capitalism and is growing closer to it.