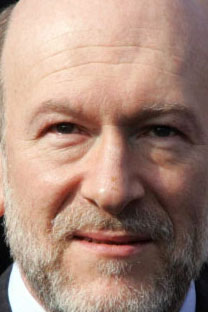 Voloshin is one of the most powerful figures in Russian politics. He is currently chairman of the mining giant Norilsk Nickel, which accounts for a third of the globe's production of nickel and was previously on the board of directors of national power company United Energy Systems.

However, Voloshin sprang to prominence in the 1990s as the head of Boris Yeltsin's presidential administration. Widely seen as the power behind the president, he was Yeltsin's gatekeeper and one of the most powerful men in the country.

He was also seen as key member for the so-called "Family" the clique that surrounded Yeltsin and in effect ran the country after Yeltsin became sick following his re-election in 1996. Other members of the clique included Yeltsin's daughter Tatyana Dyachenko and Russian oligarch and Chelsea football club owner Roman Abramovich.

Voloshin continued in his role as head of the presidential administration for Vladimir Putin's first term as president after his election in 2000, as part of what was widely seen as a hand-over deal struck between Putin and the Family following Yeltsin's surprise decision to step down.

Today, Voloshin is not considered part of any of the Kremlin fractions, but is more of an astute political operator than a faction leader. His appointment to oversee the efforts to build up Moscow as an international financial capital represents a significant increase in status for this initiative.

While Russia's capital markets are well developed, there are some glaring problems. The market capitalization of the Russian stock market accounts for half of all stocks traded in the territory of the Former Soviet Union and is significantly larger than the combined value of all of the Central European exchanges. The bond market is also well developed in terms of issues and the volume of trading. However, foreign shares still cannot be listed on the Russian exchange. There is no law banning insider trading. And most important, Russia has no institutional investors nor does it have much of a mutual and pension fund industry.

The Kremlin launched the international financial center project in April 2008 to address these problems, which was designed to provide more (domestically sourced) funds for the massive amount of investment needed to upgrade Russia's crumbling infrastructure, among other things.

The program was sidelined as the government scrambled to address the fall out of the global financial meltdown that began in Fall 2008. However, as the Russian economy begins to emerge from the after effects of the crisis, the Kremlin is working to get this initiative back on track.

Medvedev restarted work on the international financial center project on April 20, when he told the presidential council for financial markets and the Moscow government to work out a plan to establish the center by June 1 this year.

The Russian president believes turning Moscow into a global financial center as well as establishing the ruble into a leading regional reserve currency is central to building a competitive financial system in Russia.