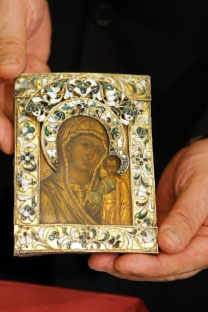 Two icons, hidden behind bricks, were discovered by restorers working on the Saviour and Nikolskaya towers at the beginning of May. The icons depict the face of Jesus Christ and Saint Nicholas and went missing during the years of Soviet power.
The icons were painted in the 16th Century. The first was above the main gates of the Kremlin, on the walls of the Saviour Tower, and the second was found over the Nikolskaya tower gates. Two interesting legends are linked to their creation.

It is thought the Saviour Tower gates were named after the icon of the Saviour depicted on them. During the siege of Moscow by Mehmed Giray’s army, one nun had a vision that the only way to save the city would be a procession of the cross through the Frolovsky gates. The people saw this as a good omen from on high. The procession took place, and a miracle occurred: Giray was at a significant advantage in terms of military strength and on the point of securing a victory, yet, in spite of this, he retreated from Moscow. An icon to the Saviour was soon painted in commemoration of this. The gates were then renamed “Spasskie” (Saviour) and were always revered as holy. Anyone who walked through them bared their head out of respect to the icon of the Saviour which was illuminated by an inextinguishable lamp, and those on horseback dismounted and went on foot. Troops went to war from the holy gates, and it was also here that foreign diplomats met. On the 1st of November 1612 it was through these gates of the Saviour tower that the Volunteer Army, led by Prince Dmitry Pozharsky and Kuzma Minin, came into the Kremlin in all their glory.

The second icon is linked with no less amazing events. In 1812, as the French retreated from Moscow, the Nikolskaya tower, just like the rest of the Kremlin, was set alight by Napoleon’s Marshal Mortier. However, in spite of the awful impact of the attack, the fresco remained intact. For the next few years Mortier was beset by bad luck, and, in the end he was blown up by a bomb which was intended for King Ludovic-Phillipe. The icon also remained unharmed by the October Revolution. In the chaos the icon of the prelate Nikolai Mozhaisky above the gate of the Nikolskaya tower was riddled with bullets and splinters, but the face itself remained unharmed. Religious Russians see this as a miracle. Under Soviet Power the church lost its significance for most people. Most probably the icons were bricked over to mark 20 years of Soviet power in 1937.

“We hope, that we haven’t just discovered traces of the paint layer, but also that the icons have been preserved in a way which will enable us to restore them” said the General Director of the Kremlin’s museums, Elena Gagarin.