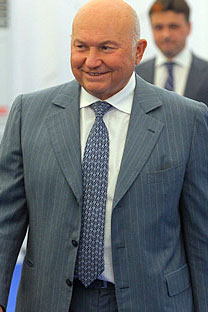 A recent report by the Political and Economic Communications Agency (APEK), which got a lot of attention in the Russian media, said it was likely that the long-serving mayor would be removed before his current term expires in July 2011.

As I have blogged here, it is no secret that the Kremlin has long wanted to replace Luzhkov, who has ruled the Russian capital like a personal fiefdom for 18 years. And there is no shortage of pretexts to do so - from the Rechnik standoff, to allegations of shady real estate deals, to Moscow police using motorists as human shields, to the flap over Stalin posters being displayed on Victory Day.

But the obstacles to removing such an entrenched figure - and the pitfalls should the operation be botched - are also formidable.

If Luzhkov manages to stay in power until the end of his current term, for example, it will be difficult for President Dmitry Medvedev not to re-nominate him for another. The reason: Russia's election cycle.

July 2011 is just five months before elections to the State Duma and just eight months before the 2012 presidential vote. One of the reasons three successive Russian presidents have tolerated Luzhkov, despite the fact that he persistently annoys the Kremlin, is that his formidable political machine manages to deliver the vote in the capital exactly how the authorities want it.

In an interview with "Svobodnaya pressa," political analyst Dmitry Orlov, author of the APEK report, says the new mayor "will have to integrate Moscow interests gradually." In other words, it will take much more than a few months to get control of Luzhkov's sprawling, Tammany Hall-like system of patronage:

“I believe that the main, system-shaping risk is Luzhkov's departure in July 2011, in a situation when there is no prepared successor and the federal center's oversight mechanisms for the situation in Moscow are not in place. This is the main risk, and it greatly exceeds the risk of the gradual incorporation into the Moscow elite of some significant figure from the federal center who has the obvious prospect of occupying the mayor's seat. I think, from the standpoint of stability in Moscow, it is important for the issue of power in Moscow to have been stably resolved by July 2011, so that all influence and business interest groups have been stabilized.”

And that means that if the Kremlin is going to remove Luzhkov, a firm decision will have to be made sooner rather than later — probably this summer.

And therein lies the paradox.

Removing such a deeply entrenched political force of nature, and then turning over his highly profitable fiefdom to somebody else, requires intense negotiation - with Luzhkov and his allies as well as among the Kremlin's clans. Moscow is one tasty morsel and a fight over who gets to control it could get nasty. Very nasty. (Remember the mess the Kremlin had on its hands when it replaced the governor of Khanty-Mansiisk back in February? Now imagine that kind of scenario in Moscow.)

So bringing everything in line in the capital could take some time. Perhaps more time that the Kremlin has at this point. "If the Kremlin has an interest in the city's stable development and in the election campaign going smoothly, I think consensus will have to be reached on the subject of the new mayor's candidacy," Orlov told "Svobodnaya pressa."

Orlov, whose report was based on interviews with leading politicians and businesspeople, says the Kremlin may placate Luzhkov by allowing him to lead United Russia's Moscow party list in the Duma elections.

If something is going to happen in Moscow, it is likely to happen fairly soon.