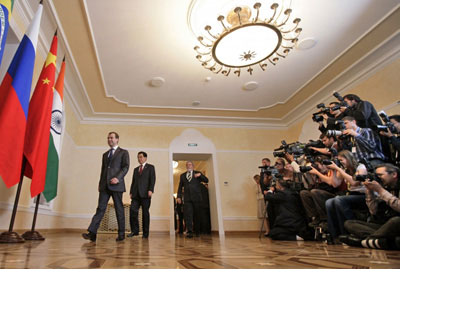 Newsweek’s Fareed Zakaria has distinguished “tectonic shifts” in the world’s economics and politics that divide the last 500 years into three unequal stages: (1) the rise of the West, which began in the 15th century and saw a “dramatic” acceleration at the end of the 18th century under the influence of the industrial revolution; (2) the self-affirmation of the United States as the principle world power (from the end of the 19th century), unchallenged in the last two decades; (3) “the rise of the rest” today, engendered by a new regrouping of geopolitical forces in the international system occurring in “real time”.
This venerable author is slightly off in his dating of the last stage, however: the current “tectonic shift” began two decades ago in the late 1980s. This process sucked into its vortex countries such as Brazil, Argentina, Venezuela, Egypt Nigeria, South Africa, India, etc. (at the time they were called the “new influentials”). China, which had only just begun its forced economic growth, barely figured in the prognoses of political scientists.

These new influentials were known for having their own interests, as distinct from the aspirations of the Soviet Union and the United States and their allies. But dramatic events in the late 1980s and early 1990s obscured objective processes in the world system, and these new influential members of the world community came into being in a new context, against the backdrop of what Zakaria calls “the post-American world”.

This “post-American world” (in which the U.S. still plays the leading economic and military-political role) has already acquired the contours of a peculiar “heptacentricity” which includes the following countries and regions: Brazil, the United States, Western Europe, Russia, India, China, and Japan. In addition to the recognized leaders of the world economy, this new formation, as we can see, includes the countries of BRIC.

Objectively speaking, is the association of Brazil, Russia, India and China a geo-economic union? A geo-political union in future? Can BRIC become, to use economist Samir Amin’s term, a “world project”? These questions are not at all trivial, and rather difficult to answer.

On the one hand, the systemic crisis has not exhausted its “destructive” potential vis-à-vis the world economy. Thus it is natural for these large countries to want to coordinate their actions and avoid the consequences of severe geo-economic upheavals by turning BRC into a relatively autonomous space (with respect to “globalization’s triad”, the United States-Western Europe-Japan) able to self-amortize the coming crisis-related shocks.

On the other hand, there are non-economic factors (the historical memory of nations; prejudices, sometimes consciously cultivated by elites in their own narrow interests; the invisible presence in relations between any two countries of a “third” country, etc.) that seemingly impede the natural processes of economic cooperation and integration.

In my view, the leaders of cooperation and integration in BRIC (if one can speak in such terms) are undoubtedly China and Brazil. First of all, both giants are fairly deeply involved in the world economy and therefore trying to diversify their foreign economic ties; they are trying to avoid as far as possible any unilateral dependence on markets in industrially developed countries and on their fluctuations. Secondly, Brazil (since roughly 2003) and China (since the 17th Congress of the Communist Party in October 2007) are conducting an active policy that could be defined as a move from reforms to development. This policy consists in an energetic stimulation of domestic demand, a consistent evening of the levels of economic development in different regions, a progressive reduction of socio-economic disparities in society, etc. The aims of this policy are clear and transparent: to raise the overall standard of living and — on this basis — broaden support in society for the economic and political system.

Having identical aims means that Brazil and China understand each other’s development strategies, and increases their interest in joint undertakings, including cross investments. China has been moving energetically in this direction for some time.

Russia and India are awkwardly referred to as outsiders in BRIC. Despite their active participation in official quadrilateral meetings, their behavior raises questions for China and Brazil. First, what is the correlation between geo-politics (support for the idea of BRIC at the top government level) and economics (stimulation of integration in a quadrilateral format) in the foreign-policy strategies of India and Russia? Secondly, which economic and political forces in the two countries are ready to participate in cooperative ties under the auspices of BRIC? Third, do Russia and India have well-thought-out long-term action strategies with respect to BRIC?

For now, there are no exhaustive answers to these questions. However, the reasons for the “lagging” of Russia and India on the BRIC front are more or less clear. In India, the elites are in a sort of conceptual vacuum: their hopes for a lasting “America-centric” world in which India would play an important role in containing China in the Asia Pacific Region have turned out to be a geo-political illusion. Moreover, neither the elites nor the people of India can overcome their inferiority complex with respect to China, a consequence of their memory of the 1962 border conflict as well as of fears about China’s forced economic growth which could turn into a geo-political expansion encircling India in South Asia.

For Russia, in my view, BRIC is primarily an intellectual problem which must be solved methodologically and integrated into the country’s foreign-policy strategy. The general idea of Russia’s independence in the world space was proposed in the late 1990s, but it will not turn into a conception until it has been saturated with the necessary regional and national “details”.

Last November in Macau a scientific research center for the countries of BRIC was established. Its mission is to develop prospective ideas to reinforce and diversify this quadrilateral formation. Help from the Russian state for this new scientific entity will significantly ease efforts in domestic diplomacy in the important direction of Russian foreign policy.