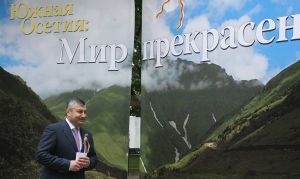 The conflict between the presidential administration and the government of South Ossetia has finally spilled over into the public arena. There have always been governmental conflicts within the elite circles of the disputed republic but until now, these disputes have been skillfully glossed over. In early days of independence, President Eduard Kokoity won government confrontations such as the resignation of Yury Morozov’s government in 2008 and the departure of Prime Minister Aslanbek Bulatsev in August 2009 “for health reasons.” Today, the situation may be changing.

Bulatsev was replaced by Vadim Brovtsev, who is originally from the Chelyabinsk region of Russia. His arrival in Tskhinval was met with very mixed reactions in both South Ossetia and in Russia. And, in contrast with his predecessors, he has used his short tenure to show that he will hold his own and stand up for his plan for the republic. At an extended summit on April 13, attended by members of the South Ossetian government and the president, there was criticism over the delay in finalizing the state budget for the current year.

According to Stanislav Kochiev, chairman of the parliament, “the incomplete budget plan was informally passed on to us. As for the program for socio-economic development, on which the formulation of the budget depends, it seems that the prime minister has taken on the task of completing work on it.”

Zurab Kokoev, the Deputy Chairman of Parliament, and the head of the ruling Unity Party, also criticized the reworking of the budget. To back up his complaints, he brought in the heavy artillery of South Ossetian politics. Eduard Kokoity gave his cabinet ministers 10 days to put the whole budget program in order and also to report back to parliament about last year’s budget.

On April 26, the republic’s government was criticized by the political council of the Fair Ossetia political party and by several publications that support the president. During the discussion about the assimilation of allocated funds, parallels were drawn with Chelyabinsk. The Presidium of the Parliament of the Republic took on an appeal by 12 members to consider a vote of no confidence in the government, which led to an examination of the parliament’s term in power.

For his part, Brovtsev launched a political counterattack: A press conference, an initiative for a “nationwide discussion of the budget,” an appeal to court to defend honor and, finally, a meeting with Viktor Basargin, the minister for regional development, to encourage South Ossetia’s reconstruction process.

But prime minister cannot necessarily boast of a victory. The Parliament Commission of South Ossetia is continuing to investigate Brovtsev’s government, and the research shows that the vote of no confidence might again turn out to be an issue. The president of the republic also indicated that resignations are possible within the higher echelons of power in South Ossetia. So far, the Public Prosecutor Office has taken on 10 criminal cases, one of which is the case against Ismagil Karimov, the director of one of the main local contractors working on the reconstruction of houses destroyed during the 2008 war. Karimov is seen as a man on Brovtsev’s side, and like the head of the government, he too is originally from Chelyabinsk.

There are several conclusions that can be drawn from the situation and also lessons to be learned. For Moscow, the recent events in South Ossetia have shown the problems of rebuilding the republic. And, strictly speaking, these are the same problems behind the whole state of affairs in the region. What will Russia’s role be in South Ossetia? This is part of the battle that is still playing out. On March 19, it was reported that this year alone the Russian Federal Budget will allocate 5.7 billion rubles to South Ossetia. Is that a lot or a little? It’s all relative. The annual budget of the Stavropol Territory, a region that covers 66,200 square kilometers and has a population of more than 2.5 million, is 50 billion rubles. South Ossetia is much smaller in size and has a population somewhere between 40,000 and 70,000. In 2008, however, South Ossetia was already granted in the region of 10 billion rubles. The process of reconstruction in the republic is not only a question of political prestige. It is about the most important source of revenue for the local economy. But at the same time this is a significant sum of money, which Moscow would give away for nothing. Consequently, the question of “control and specified usage of credit” will become a political as well as a technical problem.

Secondly, events in South Ossetia have demonstrated once again that the workings of internal politics in this republic are fundamentally different from those of Abkhazia, where political quarrels are debated out in the open. In South Ossetia, it is not a question of political perspective and development as a whole, but control over the expenditure of allocated funds. It is not impossible to think that greater transparency in the expenditure of funds allocated by Moscow will stimulate greater political openness.

And from here follows the third and most important conclusion. A concentration of all Russian aid in South Ossetia in one pair of hands (in line with the Ramzan Kadyrov model in Chechnya) is not going to be that effective. The formation of a monocentric model of power in South Ossetia will invariably create serious grounds for resentment of the Kremlin within South Ossetian society. And that resentment may have already begun with the uninvited guest from Chelyabinsk.