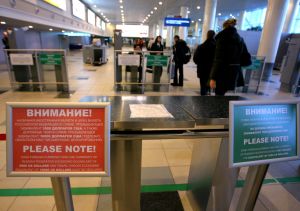 Whenever I am with friends, I always end up recounting a few stories from Russia, and recently, as I have been writing this weekly blog, my friends have suggested that I retell some of those experiences in a post or two. So here goes...we will start with my first trip to Russia.

My inaugural flight to Russia was with British Airways from London Heathrow to Moscow Domodedovo. I was pretty tired upon departure, having woken up at 5 am, and all I wanted to do was sleep. However that was not to be, as I got seated next to a chatty young American. We talked about Russia, his experiences, the language, Obama, almost everything under the sun, and when I landed I was in a good mood. This quickly changed when I saw long lines for immigration. I waited with my new friend and finally got through. I was a little concerned that I may not have filled in the form correctly, but my fears were put aside when the officer took the paper casually to one side and let me through. I went to collect my suitcase and waited.

While waiting a jolly passenger approached me and started speaking and gesturing in Russian. I did not have the faintest idea what he was saying and I was about to do what I usually do in these situations – smile awkwardly, turn, and walk away – when he started gesturing to get a drink. I kept stressing that I did not know what he was saying and he finally cottoned on and started to put together some broken English. I am not too sure how we did it, and it must have been a spectacle for everyone else, but we managed to get a drink together. I was there having a coffee, he was having a beer. I understood about 5 percent of what he was saying and he understood about 10 percent of what I was saying. After about 20 minutes...yes, 20 minutes, he whips out a St. Petersburg scarf and hands it to me. I politely refuse but he insists. It is actually a very nice football scarf and I gathered that he sold them. In any case, he then outlined that he had to leave and I insisted on paying the bill to compensate for his generosity with the scarf. When he left my initial reaction was one of relief. I was quite embarrassed sitting there not knowing a word he was saying with everyone watching, but that soon gave way to delight – I had experienced my first Russian encounter on Russian soil, and it was great. The friendliness I experienced, and the insistence he had in trying to communicate to me was actually a little humbling. I rarely experience this in England. I might in New York, but in England we tend to be quite reserved. All in all it was great, and I still have the scarf and wear it from time to time with great pleasure.

The flight from Moscow to Kazan was good - no problems whatsoever apart from not understanding a word the air stewardess was saying in English over the telecom. Seriously it was just a ramble with the odd word that was vaguely recognizable...seat...safe...time...Moscow...you get the picture! I was told that the temperature would be -17 upon landing, and I as I look back on it, I think going to Russia for the first time at the end of January was probably not the best idea. Anyway I was naturally quite concerned; my friend Alex had told me stories of nose hairs freezing and jeans turning solid, at those sorts of temperatures, so I thought it was best to come prepared. I wore an all-in-one thermal, a jumper, jeans and a leather jacket. The thing is, I wanted to get the mix right; I had to stay relatively cool on the plane, but warm enough for the short journey outside. It was only a short walk from the baggage claim, but I quickly regretted not wearing the ski coat lent to me by Alex. Between the exit and taxi that waited to take me to the flat I rented, my nose hairs were freezing.

That was to be my first taste of the Russian winter, but not the last. I think I experienced-23 or so, and the crazy thing is it can get colder. I think a few days after my -23 experience it went to -30 something. Thankfully I had travelled to back London, as I heard from friends who remained that cars had trouble starting!

A lot of things happened during my first visit, but I will skip to the moment where I was asked to talk at the local school as part of their English program. I was standing outside of the butcher shop when I was approached by 2 women who asked if I spoke English…in English. A little taken back I replied yes and they went on to ask if I would come to their school, No. 12, to talk about English and my life in the UK. I agreed and the following Wednesday, I went to the local school. I was greeted by the head teacher and the English teacher who showed me a briefly around the main hall, the facilities, and the kitchen. I was quite impressed how up-to-date everything was. They even had several of those magic boards that you can write on and conduct presentations with. I was then led to the classroom. I did not know what to expect, and what awaited me was a little surprising. The classroom was filled with about 40 people, 30 of whom were girls, with about 10 guys at the back. Now I think they advertised my visit to everyone, and out of those available at the time, it looked like only the girls bothered to turn up! The students seemed to be between the ages of 13-16. I tried to engage the class and I talked about London and the UK and how things were different compared to Chistopol. They asked about my thoughts on Russian life, Russian food, what my favorite music was etc. It was all quite fun. I gathered that they were taught extensively about London, so to meet a Londoner was a real treat. I think the funniest phrase I heard was “London is the capital of Great Britain” – the majority could say this phrase with amazing accuracy, but anything else was left up to the most skilled of the group.

After the class, the kids asked if I would be happy to take pictures – I said yes, and what followed was 20 minutes of groups of 3-4 kids taking pictures with me on their phones. One or two insisted on some one-on-one shots and others asked if I would sign their school books and write a brief message. I felt like a little celebrity and it was a lot of fun. I was laughing throughout the class, mainly out of embarrassment, but also at the reactions of my friends and family when I tell them about the day I just had. I went on to become a guest of honor at the school, being invited to view plays and other events. I am very pleased to be so well accepted in the community, and like my first encounter at the airport, I continue to find Russian hospitality very welcoming.