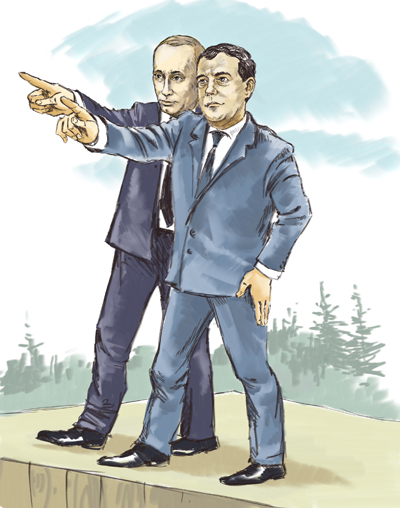 A supposedly confidential Foreign Ministry document—an intentional leak that was published on Russian Newsweek’s Web site this week—has created a stir among diplomats and journalists. Many saw it as a revelation or a signal of a significant and welcome policy shift toward the West. But in reality, this is quite an overstatement.

Contrary to widespread perceptions, the Kremlin took a defensive rather than an offensive foreign policy position during Vladimir Putin’s second presidential term. From the color revolutions to the 2008 Georgia war, it was under constant pressure and occasional attack from Washington. With the “reset” in U.S. foreign policy under U.S. President Barack Obama, the pressure is now off, and Moscow can return to “business as usual,” which has much more to do with business than traditional geopolitics.

The modernization angle is a more recent development. The global crisis has knocked Russia down several notches and significantly diminished the hubris that it had shown in the boom years of high energy prices. It awakened the leadership to the harsh reality that Russia is losing ground in the global pecking order by falling behind in terms of its industrial, technological and scientific capabilities. All the proceeds from Gazprom’s sales notwithstanding, Russia is sorely lacking what it takes to be a major global economic and political force in the 21st century. Relative energy abundance and nuclear arsenals are simply not enough. The Kremlin was forced to come to terms with the fact that Russia cannot modernize on its own and that it needs Western investment and strong business partnerships with the West.

Once this fact was accepted, the implications were clear. Russia’s foreign policy, as many political analysts had argued all along, should stop covering up the country’s diminishing status with aggressive rhetoric against the West. Instead, Russia needs to attract external resources for modernization.

This transformation is now official. Well done. The next step is to attract the resources to make the transformation possible. It is not hard to see that they are mostly found in the countries making up the Organization of Economic Cooperation and Development—that is, North America, Western Europe, Japan, South Korea, Australia and Singapore. Although BRIC, the Shanghai Cooperation Organization, the Commonwealth of Independent States and the Eurasian Economic Community are all important alliances, it is clear that these groups won’t be able to produce the same investments and business partnerships for Russia as the more established global financial and technology centers.

The European Union, of course, is at the top of the list because of its members’ advanced economies, technological proficiency and physical proximity to Russia. Russia’s links with Germany, France, Italy, the Netherlands and several other countries are so close that it is possible to talk of an emerging pan-European economic community. It is also evident that despite the relatively modest trade turnover between the United States and Russia, the United States holds the key to critical technology transfers that Russia covets. In addition, Japan should be added to the list, particularly to help develop Siberia and the Far East.

Although the Foreign Ministry document looks authentic and, on the whole, solid, it has a few glaring gaps—for example, Britain and Poland were left out for some reason. We may be dealing with an incomplete draft, but the few rough edges can be easily ironed out later. A more important problem is that the very pragmatic, down-to-earth tenor of the paper is not rooted in a grand strategy and avoids the intersection between foreign and domestic policies.

Above all, however, it appears that both the Foreign Ministry and the Kremlin understand that the kind of economic integration that Russia seeks is only possible when the relationship between Russia and the West is fully and securely demilitarized. Competition among countries will remain for a long time—perhaps forever—but hostility in the relationship must go. Normalization in relations has largely been achieved with Western Europeans, an improvement in Russian-Polish relations is hopefully in the pipeline, while the Baltic States continue to be outliers. Regarding the reset in U.S.-Russian relations, however, there is a lot of work that still needs to be done. Arms control is not enough. What is required is strategic cooperation and collaboration, from joint efforts to stem proliferation of nuclear weapons to joint missile defense projects.

Closer to home, making sure that the outside world views Russia as a democratic state with a social market economy and independent foreign policy will require a lot of heavy lifting, not simply window dressing. Modernization couched in strictly economic and technological terms is too narrow to succeed. Democracy will surely take many years—if not decades—to mature and develop in Russia, but strengthening the country’s political and economic institutions should be the leadership’s immediate priority. More than anything else, this factor will determine whether leading nations accept Russia as a viable and dependable partner.

President Dmitry Medvedev and Foreign Minister Sergei Lavrov deserve praise for making an important step forward. The next steps should include the completion of accession to the World Trade Organization, turning the E.U.-Russian “partnership for modernization” into the centerpiece of E.U.-Russian relations, consolidating and expanding partnership with the United States and turning Japan into a “Germany in the East.”

At the same time, focusing on the developed world should not come at the expense of Russia’s important relations with China, India and Brazil or with Kazakhstan and Ukraine. Isn’t this what all other aspiring countries are doing? Russia, welcome to the club.

Dmitry Trenin is director of the Carnegie Moscow Center.