A new lease on Ukraine 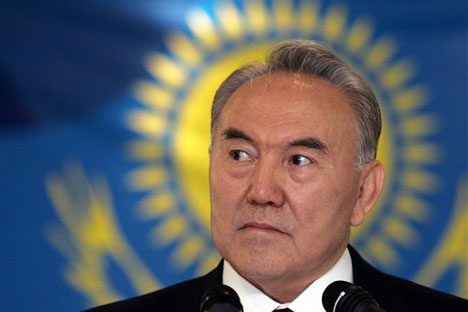 The opposition has already labeled the agreement the “Medvedev-Yanukovych Pact” in an obvious attempt to create a negative association in people’s minds with the infamous Molotov-Ribbentrop Pact between the Soviet Union and Nazi Germany. Critics of the new Ukrainian president, who assumed office in February, have increased their vitriol against Yanukovych, resorting to a host of ideological cliches and unconvincing arguments.

For their part, foreign journalists have also been guilty of using cliches in reporting the story. For example, they often refer to Yanukovych as a pro-Russian politician. They never tire of reminding readers that Moscow had supported Yanukovych in his failed run in the last presidential election of 2004, and that the Kremlin’s support played a key role in his defeat. They speak as if Kiev has definitively returned to Moscow’s orbit.

I have written more than once that it is highly doubtful that Yanukovych has a pro-Russia bias — if for no other reason than the political party he heads, the Party of the Regions, is run by the owners of major Ukrainian coal, metallurgical, mining and chemical companies that have more ties with Europe and Asia than they do with Russia.

At the same time, however, these enterprises cannot exist without Russian gas. The original price for that gas, which Prime Ministers Vladimir Putin and Yulia Tymoshenko agreed to in January 2009, was exorbitantly high for them. Tymoshenko was never able to explain clearly why Russian gas paradoxically cost Ukraine about $50 more per 1,000 cubic meters than, for example, Germany, which is located much farther from Russia’s borders.

Now that Tymoshenko is part of the opposition, she accuses Yanukovych of putting the business interests of Ukraine’s oligarchs above the country’s national interests. But there is another side to the story, about which the opposition is silent. The enterprises owned by those notorious oligarchs employ millions of people who will be deprived of a means of survival should those firms halt production or go bankrupt. What’s more, some of those plants are the sole source of income for entire towns. If they fail, those company towns will die with them.

The Ukrainian economy is on the verge of collapse. The country is suffering from a decline in production and a sharp drop in tax revenues. It has a huge budget deficit, enormous debt, an empty treasury and a high poverty rate. The gas-for-fleet agreement that enables the Ukrainian government to save up to $4 billion per year is like a new lease on life for Ukraine’s dying economy. Without that cut in gas prices, Ukraine could not have shown an acceptable national budget to the International Monetary Fund and resume cooperation with that organization. Now it is eligible to receive another $6 billion or $7 billion this year and up to $20 billion over the long term.

It is clear that Yanukovych had few other options available to him than to sign the deal.

But the question most people are asking is: Why did the Russian side suddenly agree to concessions that will cost it $40 billion over the next 10 years in gas discounts in return for extending the lease of the Black Sea Fleet in Sevastopol, particularly when the fleet has lost almost all of its military and strategic importance anyway? With that money, Russia could build a new base for the fleet on the Russian Black Sea coast, modernize the ships and make all of the officers rich to boot.

There are several reasons for Russia’s generous terms. The Kremlin probably realized that the previous prices for Russian gas were exorbitant. This would inevitably lead to a payment default and a new “gas war” between Russia and Ukraine that would cause billions of dollars of lost revenue for Russia and lead to angry accusations from European gas customers of “Russian energy blackmail.”

There were political factors as well: Russia’s presidential election is only two years away, and regardless of whether the ruling party chooses to run Medvedev or Putin for president, either one could bolster his campaign by boasting that Russia’s flag as well as the Navy’s St. Andrew’s flag will flutter over Sevastopol’s bay for at least another quarter of a century.

What’s more, judging from statements Putin made at a news conference on Monday, he is playing a complicated and tricky political game. In one sense, he is presenting himself as the guardian of the European Union’s energy interests by suggesting that, thanks to him, an agreement has been reached ensuring the stable transit of Russian gas over Ukrainian territory for the next decade.

At the same time, however, he uses scare tactics against the Europeans by suggesting that with the Ukrainian opposition ready for a no-holds-barred political fight and threatening to annul the gas agreement if they come to power, now is the time to build the South Stream pipeline bypassing Ukrainian territory and declare a fait accompli.

According to polls, Ukrainian society is divided over the gas-for-fleet deal between Moscow and Kiev. According to a survey conducted by Research & Branding Group, 53 percent of respondents hold a generally positive view of the agreement, while 32 percent hold a negative view.

But there is an enormous distance between simply being opposed to the deal and actually taking part in massive protests, as the opposition has urged. When Tymoshenko and other opposition leaders were in power, their reputation worsened to such an extent that it would seem highly unlikely that they can inspire the people to stage another Orange Revolution. It would be especially difficult now, when most people are willing to give Yanukovych a fair chance—maybe he can end the crisis and set the country on the right path toward economic growth and political reform.

But if nothing has changed six to 12 months from now and if people don’t see an improvement in their standards of living, Yanukovych can expect serious problems.