Dependence on foreign cash must go 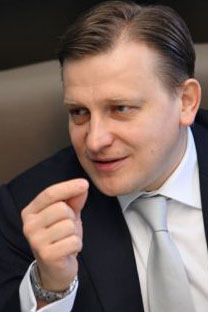 The financial crisis highlighted the financial sector’s dependence on foreign investors. RN spoke to the CFO of one of Russia’s largest banks about this phenomenon.

What lessons has Russia’s banking system learned from the crisis?

Lesson No. 1 is the need to develop domestic capital markets to reduce dependence on foreign investors. When the crisis broke, banks in Russia mostly provided loans to the real economic sector. Usually, their assets were simple loans. As the economic crisis deepened, risk was rising, with loan loss provisions growing much faster than income, which led to negative financial results and in turn reduced capital adequacy.

Many Russian corporations and banks have placed equity and bonds on Western markets, which also exacerbated the negative effects from the crisis. Russia was not seen by Western investors as their core market, and when they had to rationalize their capital investment strategies they simply withdrew.

Another problem is major concentration within Russia’s banking system. A group of 20 to 30 leading banks comprises most of the banking market. Meanwhile, we see that the government wants to diversify the market to create an adequate base of strong and reliable banks. We can see efforts by financial regulators and other authorities to invite foreign banks into this process, but there are few strong players yet.

VTB sought government support to survive the crisis. Why?

In the early 2000s, VTB was just a niche player focusing on foreign trade, with a balance sheet of less than $5 billion e_SEmD a far cry from today’s $120 billion. The bank could not have achieved this by simply expanding its deposit business.

In the pre-crisis years, VTB had been building its balance sheet, especially its loan portfolio and its share of the corporate market and retail lending, and borrowed internationally to finance this growth. Given that Western investors were affected by the crisis and lost much of their appetite for risk, foreign borrowing became the main headache during the crisis. When the crisis came, VTB’s debt stood at more than $10 billion e_SEmD the highest among Russian banks. The government stepped in with assistance, and with government funding we stabilized our markets and announced a bond buyback program, thus demonstrating to the market that VTB Group has significant liquidity and that we remain confident of our financial situation.

We are now building a new strategy aimed at turning our investment into an integrated universal bank. Russia’s banking sector needs a new player, combining three fundamental elements: corporate banking, investment banking and retail. At this point, no existing bank has succeeded with this type of integration. We are developing a system of capital allocation for all products, which will allow us to control the financial state of each of our businesses.

We examined the international experience of such solutions. Unfortunately, most attempts have been futile. In Britain, Barclays seems to be the only happy exception, along with Deutsche Bank in continental Europe. Such examples are very rare, however, and we understand that we are facing a challenging task.

VTB has already had a negative IPO experience. How will the reform affect the bank’s capitalization?

When we went for our IPO back in May 2007, the share price was below 14 kopecks. Naturally, it sank deeper due to the crisis, and we trade at about 7 kopecks now. We want to raise the stock price to 15 kopecks over the next three years.

Our goal is to make VTB a strong commercial agent capable of competing with such global giants as Deutsche Bank, Barclays, and JP Morgan. When the next crisis comes, forcing foreign players out of Russia, VTB will remain, and it will be able to offer loans to domestic producers. It is for this reason that VTB Group was chosen to issue Russia’s sovereign bonds.

The main lesson we learned from that IPO was the need to understand who our strategic investors are. Our new strategy includes not just road shows, but also quarterly meetings with investors where we speak about our progress in implementing our short- and long-term targets, providing a full picture of the bank’s situation and prospects. We will also make our financial reporting more transparent, enhancing quality and speeding up delivery.

Will Russian companies change their dividend policy and cooperate with minority shareholders after the crisis?

VTB is rethinking its dividend policy, too. With our bank, this is a special case. Our new policy in this area will be aimed at maintaining certainty and stability of our dividend flow.

Some investors are focused on share price appreciation, and our “Road to 15” program will boost our stock price. Others are focused on dividends, and we hope to please these investors, too. Among issues to be considered at the shareholder meeting is the distribution of a quarter of the bank’s annual revenue to shareholders in the form of dividends.

For the first time since the start of the economic crisis, Russian banks have started investing their reserves back into the market. On April 1, the total amount of reserves for covering possible losses of all credit organizations totaled 2.1 trillion rubles (approx. $70 billion), which was down 5.1 billion rubles ($170 million) from a month earlier.

According to The Banker magazine, VTB Group took 70th place in 2008 among the world’s largest banks. 85.5 percent of its shares are owned by the Russian government. VTB’s long-term credit rating, according to Moody’s International Ratings Agency, is Baa1 (“stable”). In 2009, the value of assets was $119 billion.

Investment
"VTB has sucessfully undergone a transformation from a retail bank to a leading Russian investment bank. Our new clients are already significantly contributing to VTB’s growth."
VTB President and chairman of the board Andrei Kostin

"In lending to medium-sized businesses, VTB is most interested in companies with a firm financial footing that have overcome the crisis. To help such clients, our bank has reduced minimum deposit requirements, increased loan payback times and expanded our list of strategic sectors and lowered rates. We’ve now returned to pre-crisis requirements for lending to medium-sized businesses."
VTB Senior Vice president Andrei Kiselev