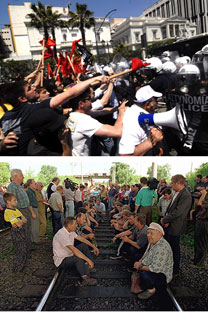 Greek protests in 2010 vs. Russian railroad workers’ strike,which blocked off the Trans-Siberian railway, in 1998

Greece’s financial meltdown sounds all too familiar to Russia’s experience in 1998. Yet differences between the two show how far Moscow has come in 12 years.
The crisis Greece is facing looks all too familiar to Russia. It went through more or less the same thing in the run up to the August 1998 financial meltdown that ended with the ruble cut to a quarter of its value, repayment on its foreign debt frozen for five years and its banking sector destroyed. However, this time around Russia will probably only be affected for about four months if Greece defaults on its debt before returning to a path of strong growth and recovery.

The European Central Bank (ECB) was forced to act on May 9 to prevent another meltdown of the continent’s financial system. While the ECB’s $1 trillion rescue package floods the markets with money and staved off disaster, it has left the fundamental problem untouched: All of Europe’s economies are weighed down by debt and high deficits.

As confidence evaporated in the first week of May, equity markets around the world, including Russia’s, tanked as the possibility of a Greek default loomed large. But unlike the global crisis that burned the world’s economy 18 months ago, this new crisis looks a lot like the run up to Russia’s 1998 financial crisis; that one was bad for Russia but had a very short-lived impact on the rest of the world. This time around, rather than being infected by a potential Greek collapse, Russia is on the other side of the fence as one of the strong countries. This will be little more than a bump on the path that leads back to strong growth.

At the start of 1998, Russia had just experienced its first-ever positive growth, and the spreads on the government’s Treasury bills had fallen into the low teens, making the 8 percent deficit easier to finance. Russia was starting to look like it had turned the corner after almost a decade of chaos.

But it was brought to its knees by contagion from the Asian crisis the year before. By the summer of 1998, the collapse of the so-called Asian Tigers finally fed through into commodity prices, bringing the cost of a barrel of oil down to $10. Russia’s economy promptly collapsed despite a huge International Monetary Fund bailout loan. Yields on the state’s bonds soared to over 200 percent and cash fled the country, leaving the state with a pathetic $9.1 billion at the start of August.

The crisis came to a head on August 17, 1998, when the government called it quits. The ruble was cut to a quarter of its previous value and the government put a five-year moratorium on all international debt repayment.

Now history is repeating itself with Greece. The bailout deal struck with Germany and the other European Union members (despite the ban on bailouts in the E.U. treaty) was not enough to convince bond investors that Greece’s problems are behind it. Fears of contagion quickly spread to neighboring markets, threatening to bring the entire European edifice down. Some observers questioned the lack of a single fiscal policy across the Eurozone.

Investors are afraid of a repeat of Argenitina’s collapse in 2001, when the country was unable to swallow the bitter medicine of the austerity package imposed to fix the collapsing public finance. Greek is close to going the same way after people took to the streets on May 5 to demonstrate against the deep cuts in public spending that will hit almost everyone in the pocket.

However, things are not quite as bad as they seem for countries like Russia, which saw heavy selling of its stocks and bonds in the first week of May. It is notable this time that, unlike the crash in 2008, the problems are regional and not global. The Asian collapse in 1997 spread to Russia via the fall in oil prices, but for the rest of the world it was business as usual. Indeed, the developed world was enjoying the heady excesses of the dot-com bubble, which didn’t pop until 2000. While Russia’s meltdown caused a sell off in the west, VTB Capital points out that it took the western markets to absorb the shock and return to its growth bubble. And Russia wasn’t part of the E.U., which has a vested interest in bailing Athens out, as no one wants to see the Euro project wrecked.

“The Greek situation is evolving along the lines of Russia’s 1998 economic crisis; indeed, the fiscal parameters of Greece’s situation are worse than that, but they also have a greater political imperative of financial aid from the Eurozone playing to their benefit, at least for now,” Wiktor Bielski, an analyst with VTB Capital said. “And the endgame might be very similar, i.e. an eventual default on Greece’s sovereign debt triggered by the country’s inability to meet the conditionality attached to the package. That said, the experience of the 1998 Russian crisis suggests that the contagion from such a credit event, while significant, would be short-lived.”

While growth in western Europe and America is sluggish, the rest of the world is doing better than expected. The Eurozone manufacturing index is at a 46-month high of 57.5 (vs. 56.6 in March, while 50 represents no change) and the U.S. manufacturing index is back over 60 again (at 60.4) for the first time since June 2004, said VTB Capital. Likewise, car sales in the United States, China and Japan are all up by 65-75 percent over the first quarter; housing starts stateside are up 20 percent; and both of these have been feeding a surge in production in commodities like steel, which is now at a record high.

“On the whole, Russia’s business is just taking shape. It should not be forgotten that Russia’s active financial and property markets only emerged some 20 years ago, while in the West such markets are centuries old,” commented Andrei Kostin, president of VTB.

“Looking at the system as a whole, we see that we have indeed turned the corner. Bad debt levels have dropped markedly, and reserve levels vary among banks. Some banks proved very responsible and built their reserves last year, as required, and some are still doing this now. Generally, it is obvious that the system has turned this corner,” Kostin said.

In general, the United States is expected to grow by about 3 percent and Europe by about 1.1 percent this year, according to the IMF, whereas Russia’s economic recovery is gathering momentum fast. The Russian Ministry of Economic Development upgraded its forecast of end-of-year growth to 4 percent (it grew 4.5 percent in the first quarter and is still gathering speed), and the investment banks are talking about 8 percent of growth in the second half of this year. “Another positive factor is that markets have grown, too, rising from the bottom and thus raising collateral values and improving client creditworthiness,” Kostin added.

On top of this, the BRIC countries are a new factor in the global balance of power, and all four of these countries are continuing to grow very strongly, which will provide important support to commodity prices, the key consideration for Russia’s ability to weather the potential storm.

If Greece collapses, the consequences are unthinkable, yet it is not enough to make really big waves on the market: Greek GDP was about a fifth of Russia’s economy and a tiny fraction of the European Union’s total GDP in 2009. There will be some contagion to the other countries on Europe’s periphery, but Greece alone is not big enough to bring the likes of Russia down, let alone France and Germany.