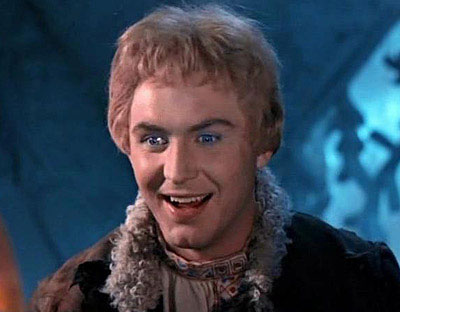 “It’s a horrible film, absolutely revolting, don’t ever see it.” “Total gibberish.” “Now I know why we won the Cold War, if that’s the sort of movie Russians like.” “I wouldn’t be surprised if that movie was one of the reasons why the Soviet Union collapsed.”

If you can believe it, this heated discussion at the site imdb.com was provoked by the most innocent of children’s films, a fairy tale called “Morozko” (the Russian equivalent of Father Frost), shot in the USSR in 1964. In the 1990s, when Russia was in vogue abroad, the film was translated into English and shown on American television and sold in video stores. Some of the Americans who saw the film experienced a genuine culture shock. “This film is as depressing as everything else connected with the Soviet Union — poverty, crime, corruption.” “On a scale of 1 to 10, I give it a 0.”

So what did this poor put-upon movie do to excite such a negative reaction? As a matter of fact, in Russia it is still considered one of the best children’s fairy tales and is regularly shown on TV. The plot is briefly this: the story’s heroine, an intelligent and beautiful girl named Nastenka, lives with her stepmother and her older sister, who is stupid, envious and ugly. When winter is at its wintriest the wicked stepmother sends Nastenka into the forest in the hopes that she will die of the cold. But Father Frost steps in and personally saves her life. Three times he asks her: “Are you warm, little girl?” “Yes,” says Nastenka, blue with cold. After that Father Frost rewards her with expensive presents and sends her home. Now the wicked stepmother sends her older daughter into the forest so that Father Frost can give her presents too. But the sister refuses to endure the cold, demands her presents, and calls Father Frost bad names, for which he punishes her.

From the point of view of common sense, there is no logic here. The little girl goes obediently into the forest to meet certain death, lies to old Father Frost, assures him that she is warm when she is dying of cold, and receives presents by way of reward. The older sister tells the truth, says that she is cold, and is punished. It is this illogicality that irritates the American viewer most of all.

But to a Russian viewer, the situation makes complete sense. Nastenka is rewarded for her meekness and resignation. She was told to go to the forest, so she went: that was her fate. Did she deceive Father Frost when she told him she was warm? Why should she trouble an old man with her problems? Especially since he is master of the forest and she is his guest, as it were.

It’s interesting to compare this fairy tale with a German one called “Metelitsa”. The general outline is like that of “Morozko”, but it focuses on completely different aspects. In the German version, the little girl finds herself in the house of a sorceress. She works for her, helps her with the housework and is rewarded for her efforts. Meanwhile the bad girl is lazy, does nothing and is punished. In the German version, this is absolutely logical: work is rewarded. In the Russian version, patience and resignation to one’s fate are rewarded. Also compassion and kindness. After all, Nastenka does not take revenge on her stepmother and sister who had sent her to her death, but magnanimously forgives them.

Moscow University Professor Anna Pavlovskaya is the author of a book called The Russian World: Character, Daily Life and Customs; in it she devotes an entire chapter to fairy tales. Pavlovskaya sees in Russian fairy tales an inexhaustible source of information concerning the Russian national character or what some call the “mysterious Russian soul”.

Take, for example, that initially odd-seeming personage Ivanushka the Little Fool. He is odd because here again there is no logic or common sense: though he is a little fool, he defeats all his enemies, marries the tsar’s daughter and receives half a kingdom to boot. True, it turns out that he is a little fool only from the point of view of his older brothers who, as a rule, think only of their own gain, material gain, that is. Ivanushka, on the other hand, lives in a dream world: he sits on the stove, fantasizes, talks to the animals and gives them his food, for which they help him in return. The “smart” brothers do not go to visit their father’s grave at night because it’s dark and scary and their father is beyond helping. But Ivanushka goes, because he promised his dying father that he would and for him his word is more important than earthly common sense. And for this Ivanushka is rewarded: he receives a magic steed, and later the hand of the tsar’s daughter in marriage and her dowry.

Here is the folk ideal: a person who is true to his word, of simple ways, and lacking all self-interest. The attitude toward riches in Russian fairy tales is unequivocally negative. And though the hero does ultimately receive half a kingdom, this is more of an extra bonus, in addition to the good wife. But Ivanushka will never strive to be rich, simply for the sake of being rich, for that is to be greedy, a negative quality from the point of view of the folk ideal. Perhaps that is why the attitude toward the super-rich in Russian society today is mainly negative. Russians cannot accept a successful businessman as a national hero.

Finally, the most important feature of a Russian fairy tale is its boundless faith in miracles, in the idea that everything will work out in the end by some incredible means and goodness will triumph over evil. In the fairy tale “The Flying Ship”, a sorcerer asks Ivanushka the Little Fool: “Where are you going?” “Well, the tsar has promised to give his daughter to the one who builds a flying ship,” Ivanushka replies. “And can you build one?” the sorcerer wonders. “No, I cannot,” Ivanushka answers in all honesty. “So then why are you going?” “God knows.” Naturally, everything turns out for the best in the end. Such are the eternal wanderings of the Russian soul “who knows where” in search of “who knows what”.

How will we implement the modernization that our country is in such dire need of, about which so much is being said in the Kremlin? God knows. But for some reason, in the depths of our souls, there is that unassailable faith that somehow (by some miracle, no doubt), it will all work out. Read Russian fairy tales, they explain everything.