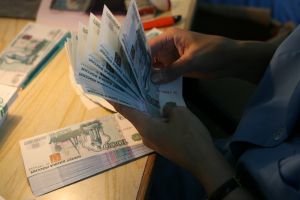 If you read my last blog post, you will know the premise – I am simply retelling some of the unique situations I have experienced while in Russia. So onward…

As part of my work I usually end up visiting quite few old factories in Russia. Before coming to Russia, I was always curious as to what these factories would look like and how they would be run. From watch factories to sewing factories, the format is usually the same. The buildings are normally quite old and by modern standards, quite run down. In Chistopol, the buildings do not exceed 4-5 stories. I think there is a 9 storey building somewhere in the town, but I have forgotten where. All of the factories appear to be quite guarded unless you know some of the top brass, in which case they are quite easy to enter. The entrance is usually manned by an old woman, usually dressed quite casually and frequently in some proshaiki, also known as “goodbye youth” shoes. Upon approach you might be forgiven for thinking that you were entering some top-secret facility, they ask all sorts of details and once even for my passport details. On one other occasion, in a box factory in Kazan, I was actually not allowed in, with the woman at the gate stating that foreigners were not allowed entry. All I wanted was 100 pizza boxes for our pizza delivery project, and I had actually called ahead. Now I am not too sure if it was really the policy or just the woman not liking the cut of my jib, but I found it quite amusing nonetheless. Luckily I travel with translators and other companions that can help in these situations.

That said, on the flip side, if they know you or realize that you come frequently to visit the head managers, you can be invited to tea. I recall one such occasion when I some colleagues from the US had come down to work on a tech project in the town. One of the technicians had just completed a rather scary roof climb to make some assessments, and we came down to the entrance to wait for our ride and the lady at the gate kindly let us stay inside (it was pretty chilly). We ended up chatting away and playing with her cat. I found the experience quite surreal, but it also served as an example of how things are changing from once being so guarded to being much more open.

Speaking of change, this is one story I always find quite amusing and quite a clear example of how the mentality of every day Russians in the smaller cities differs from the larger ones. I remember being invited to the local electronic store to pick out a new flat screen TV. It was actually a present for our flat warming, and a very generous one I might add. A TV was selected and when it came to purchasing, the generous giver had disappeared. I enquired into where he had gone and was told he had gone to the cash machine to cash out money for the TV. I have to admit that I was a bit surprised. If he had a card, why not pay on the card? My next thought went to the card payment system…the store probably did not have one…but it seemed strange, this was a big store, with a lot of high value items, it must have a card reader. I asked again, and sure enough they did. Now I was really perplexed. Why would he go to the cash machine just a few yards away to cash out the money and then take it to the cashier, when he could just use his card? So I asked, and the answer was trust. He simply did not trust the electronic system – what if the card reader did not work? What if he paid money and then later on the store said he did not? What would happen if later on it was reversed? I kind of understood but I was still a bit perplexed by the whole situation…why was there no trust?

When I delved deeper of the over next few the weeks and months, I came to the understanding that this behavior was actually quite commonplace. The majority of salaried workers in the town had to have cash cards by law, but on payday they would go to the cash machine and cash out all of the funds and keep it on them. It is also why I saw quite a few purses being carried by guys, in the style of man bags – it was to hold their cash. The answer to this riddle actually goes all the way back to the banks and companies. There is actually very little trust because there have been record number of abuses. When a customer complains to the bank about fraudulent online transactions, the bank usually answers something to the effect of “well if you go online, you know the risks, and you should have paid in cash” – the same is for mobile phone abuses with the paid text messages and so on. When the customers get the raw end of the deal from banks and companies, the naturally reaction is to become suspicious and wary. It was a strange experience, but one that gave me a real insight.

Now I think that customer relationships may have improved, and in the larger towns, people are much more tech savvy and I guess are more aware of their rights, but it will take a while for the mentality to change in the smaller cities – areas where gossip is rife, and a bad experience suddenly becomes an everyday fact.

Another situation that I experienced while in Russia was how the larger supermarkets dealt with theft. The procedure is pretty much adopted by the majority of food stores in the Tatarstan region, and basically involves subjecting every person carrying a bag to wrap it up in a thin layer of plastic. Now I am not too sure if this is the law of the region or even of the country, but apparently, if the bag is not wrapped up in plastic, the store security can ask to search you and your belongings. Now I really did not understand this, as the problem of theft in supermarkets is a worldwide concern. Most stores that I know simply use CCTV and store security to combat offenders, and the supermarkets I visited in Russia also had these as well, so I was bit surprised by this added measure that also made little environmental sense. Actually it made no environmental sense. I largely see this as quite a silly procedure. Having gone through it several times, the bags would be wrapped up and then I would have to break the seal to get at something – could be a list, a pen, or my wallet – even before I got to the cashier, and after I have paid I would promptly throw away the offending bag in the bin where it collects each day. I initially thought that this combined with a number of other things I saw would place Russia quite low on the environmental rankings, but actually they are doing quite well. Certainly not as badly as you would think, having such procedures like this. Hopefully in time it will be removed, but I add it to the growing list of things I see and experience, and yet to fully understand!