“Europe could be Russia’s most reliable partner” (video) 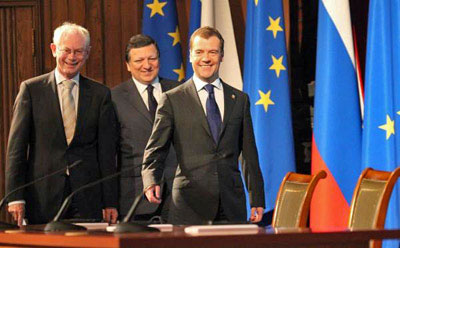 Russia and the EU did not come to an agreement on visa-free travel during the summit in Rostov-on-Don in southern Russia on June 1. “We should be moving to the main goal, namely, lifting the visa regime,” Medvedev said at a news conference on Tuesday.

“But the main thing is not to politicize the issue and not to be engaged in impracticable projects,” the president said. “We should face the truth and see how the whole European Union is ready to [solve] this problem.”

To accelerate the work of its partners, Russia has prepared a draft agreement on lifting the visa regime, Medvedev said. “I hope our European partners will study it and we will be moving further,” he added.

Russia hoped to determine particular timeframe for the movement toward visa-free travel, the media said.

Moscow and its European partners also discussed economic co-operation, modernization, security and international situation. But many expected particular results on the visa issue. “We hope that the summit in Rostov-on-Don will spur movement toward a visa-free travel regime,” Alexandr Grushko, a deputy foreign minister, told RIA Novosti news agency prior to the meeting. A long-term Partnership for Modernization between the two sides, adopted in November 2009, includes a commitment to scrap visa requirements. However, it is unclear when this may happen.

“Europe has its own approach to Russia’s modernization,” said Yekaterina Kuznetsova, director of European programs at the Center for Post-Industrial Studies. Big hopes had been pinned on the summit in Rostov-on-Don, first of all because it is the first meeting after the adoption of the Lisbon Treaty and dramatic rapprochement between Russia and Poland, she wrote in Nezavisimaya Gazeta.

“There had been another reason – the idea of the partnership for modernization gives hope for a large-scale breakthrough in the economic co-operation, which had been hindered for a long time, and on the geopolitical front in the future,” the analyst added.

Leaders of the European Union have supported Russian President Dmitry Medvedev’s initiative for modernization, but the plan they put forward “was a disappointment because of the lack of details and emphasis on politics,” Kuznetsova said.

At the same time, Russia needs allies for its modernization, and “Europe seems to be a natural, and possibly the only, reliable partner,” the analyst stressed. “However, Eurocentric modernization remains largely a dream, and the hopes for its realization are too elusive,” she noted. Prior to the summit it became clear that no significant decisions would be taken, including those on visa-free travel and a joint strategy for modernization, she added.

Russia had expected to solve two tasks at the summit – to determine particular terms of transferring to visa-free travel and sign the joint program Partnership for Modernization, Kommersant daily said.

The program should have helped the Russian president to fulfill his plans on modernizing the Russian economy, the daily said. The EU had proposed several issues for the document. The main one was the need to guarantee rule of law in Russia for the implementation of the Kremlin’s modernization initiatives to be successful, the paper said.

The EU also expressed its readiness to help the Russian authorities in fighting corruption, improving investment climate, attracting non-commercial organizations to the modernization, and Russia’s transfer to European standards and regulations.

The Russian Ministry of Economic Development prepared a list of joint measures to fulfill the program. Moscow was ready to co-operate with Brussels “practically in all spheres, including fighting corruption, easing the visa regime, space, medicine, navigation technology, programming, manufacture of equipment and improving energy efficiency,” the paper noted.

However, by the time of the summit, the draft program had been transformed into a memorandum on key directions of the initiative Partnership for Modernization, the paper said. And this memorandum has not been prepared for the signing in Rostov-on-Don, it added.

The Europeans “failed to co-ordinate the document inside the EU, as it had to be approved by all member states,” Kommersant’s sources in the Russian delegation said. They just had not enough time to do it by May 31, they were quoted as saying.

As a result, the Russian and European leaders had to sign a joint statement which stresses the importance of the modernization of economies, the daily said, adding that it is an essentially “political document.”

The document is intended “to transfer the work on modernization to a practical direction,” the daily noted. But this will happen only after all members of the EU approve the initiative. So far their reaction has been rather positive, it said.

“The aim of this summit is to understand how we and the Europeans may go further,” the source in the delegation said. “We expect the initiative to be approved by the next summit.”

The paper noted that the draft document had not mentioned any plans of introducing visa-free travel. During the preparations for the summit Russia “did not manage to make Europeans formulate their position so that prospects of abandoning visa regime were determined,” the daily added.

“If Russia is ready to lift the visa regime even tomorrow, the EU believes the issue requires a long period of work,” Gazeta.ru online newspaper said. For Russia, it was the key issue of the summit, it noted, adding that consultations of experts on the problem had already been completed.

Meanwhile, the talks on the new basic agreement on partnership and cooperation are also underway. The previous agreement expired on December 1, 2007 and has been extended since then.

Russia-EU summits demonstrate the state of relations between the two sides, and the situation has now noticeably improved, said Fedor Lukyanov, editor-in-chief of Russia in Global affairs magazine.

“The topic of modernization has emerged, which can be discussed for a long time,” he said. “But this agreement will be implemented at the level of particular companies and countries,” he told Gazeta.ru. However, there is a chance that the discussion on this issue will be continued, “and in a year or two, the two sides will come to particular agreements,” he added.