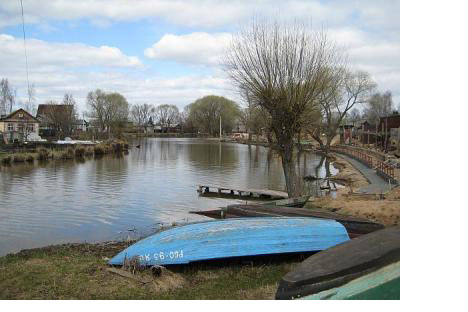 “Zalessky” means “behind the woods;" there are acres of forest along the 150-kilometer road from Moscow, including Russia’s first national park, the Losiny Ostrov (‘Elk Island’). The writer Mikhail Prishvin described this road as “one of the most beautiful in the heart of the country, the forests rising all around.” The town of Pereslavl is part of the "Golden Ring" of ancient towns near Moscow and is one of the most popular. The infrastructure needs a bit of work to cope with the inflow of local tourists and several areas could do with a clean up. On busy weekends, the hotels can’t accommodate the number of visitors and yet the muddy lanes along the Trubezh River still feel like a fishing village.

Yury Dolgoruky, who founded Moscow in 1147, built the first fort and cathedral at Pereslavl Zalessky five years later. The beautiful Saviour-Transfiguration Cathedral still holds pride of place inside the earthen ramparts and is one of Russia’s oldest buildings. The medieval prince, Alexander Nevsky, who was born in Pereslavl, is commemorated in bronze nearby.

Other famous sons of the town include Mikhail Koshkin, designer of the T34 tank, and the Soviet painter, Dmitry Kardovsky, who lived in a carved wooden house on the Moscow Road. Kardovsky is buried in the nearby Goritsky Monastery, which is now the town’s art gallery and historical museum. Icons from numerous local churches are collected here, along with the usual assortment of Russian portraits and landscapes that were parcelled out to provincial museums in the Soviet era. The Uspensky (Assumption) Cathedral, with its carved and gilded iconostasis, is particularly worth visiting. You can also climb the 19th century bell tower to admire views over the town and distant lake.

The monasteries all have their own special characteristics, from the shining gold domes of the restored Nikolsky Convent to the whitewashed walls of the ancient Nikitsky monastery, overlooking the wide waters of Lake Plesheyevo. Local legends insist that the Nikitsky monastery was built before the town even existed, in the eleventh century, on the site of a pagan place of worship. The original wooden structures are long gone; Ivan the Terrible paid for the stone buildings in the 16th century, including the stately silver-domed cathedral. The monastery today is thronged with pilgrims among the chanting monks and the glow of beeswax candles.

Sights that are more recent include a series of unique museums. The ‘Botik’ Estate Museum in the village of Veskovo houses the last surviving vessel from the fleet that Peter the Great built here. A triumphal arch, a series of 19th century pavilions and a statue of the young Peter gazing out from the hill across the water complete the ensemble.

An arboretum containing a thousand different species of tree and a colorful museum of irons in an old merchant’s house add to the variety of Pereslavl’s attractions. Local collector, Andrei Vorobyev and his father Boris, have managed to turn 200 flat irons into a popular entertainment. The museum is so successful that Vorobyev has also opened a collection of teapots in a log cabin on the road to the boat museum.

A narrow gauge railway museum further along the same road near the village of Talitsy has a similarly delightful air of quirky individuality. Director, Sergei Dorozhkov trained as a technical translator in Britain and was determined to carry the train-spotting enthusiasm of steam-train-loving Brits back to his native country. An assortment of rusting engines in a clearing in the pinewoods has proved an inexplicably popular tourist destination. What was once a network of narrow gauge steam railways serving local villages is now a few hundred yards of track along which visitors can propel themselves on a hand-powered cart.

Pereslavl’s main charm lies in its location on a huge lake and its quiet village streets. From the embankment, you can walk along the river to the church of forty saints on the lakeshore. In spring, thousands of frogs migrate from the river to nearby ponds and marshes. A little way north, the town’s beach comprises a stretch of sand where the worst of the mud has been dredged and a few wooden umbrellas scattered over the promontories. It’s a good a place to look out at the mini-ocean as the sun sets and the black-headed gulls wheel and dive over the waters Peter sailed.

Food
Pereslavl is hardly a culinary mecca. There are often stalls near the monasteries selling pickled mushrooms, tiny smoked river fish and honey, but most of the cafes serve up very standard Soviet fare. One notable exception is the Pinocchio Pizzeria on Ulitsa Svobodi, close to the center. Excellent value fresh orange juice, strawberry milkshakes and salads will revive a jaded palate.

Accomodation
Hotels can fill up fast. The Hotel Zapadnaya is convenient, if you can get a room there. They have a wonderfully informative English-language website.

If there’s no room at the inn, try the out of town Lesnaya Skazka (“woodland fairytale” – 48535 23297). A favorite with holidaying Muscovites, this complex of cottages around a frog-filled pond is on the Moscow road, opposite the chapel marking the birthplace of Tsar Fyodor. A twin room in the main hotel costs 2,000 rubles.

Transportation
Pereslavl is a generally two-to-three hour bus ride away from Moscow’s Schyolkovsky Bus Station, but bad traffic can double the time. Buses run every hour or so and cost 280 rubles each way. Another option is to take the train to Sergiev Posad and a taxi from there (around 1,200 roubles). Because the sights are so spread out, you need some transport within the town. It might be worth hiring a car for the day, or you can improvise with a mixture of buses and taxis. The number one bus goes frequently between the center and the bus station, where taxis are always waiting.