The new old mayor of Tbilisi 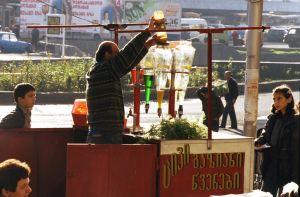 Georgia held municipal elections over the last weekend in May. At first glance, this event looks run-of-the-mill. In post-Soviet republics, as a rule, the system of authority is a vertical with a strong central power; therefore local polls generate less interest among both citizens and observers.

However, these last elections in Georgia stand out from ordinary election campaigns at the local level. On May 30, residents of the Georgian capital elected their old mayor to a new term. Tbilisi has particular significance for the country’s political life. This is where Georgia’s fate was sealed on a number of occasions. A mass demonstration on April 9, 1989 put and end to this republic’s Soviet history. Tbilisi was also the reference point for the short-lived rise of newly independent Georgia’s first president Zviad Gamsakhurdia. And it was in Tbilisi in September 1991 that the rapid political demise of the “frenzied Zviad” began. In 2003, Tbilisi’s Rose Revolution didn’t just open the way to the political Olympus for Mikheil Saakashvili. Its results led to the formation of a new geopolitical status quo throughout the Greater Caucasus. And the electoral success this past Sunday of Tbilisi Mayor Gigi Ugulava could well have a major influence on the internal political configuration of Georgia’s entire system of authority.

But before drawing long-term conclusions, we should look at the particularities of this local campaign of national significance. First of all, this was the first-ever direct vote for mayor in Tbilisi. Before, the mayor was either appointed, or elected by parliamentary deputies. Secondly, the idea of direct elections came not from the authorities, but from the opposition, which pressured Saakashvili into making this decision, which was supported only reluctantly and not by everyone in his administration. Thirdly, this campaign was the last before the next presidential elections. Therefore, by definition, it was seen as a rehearsal for the presidential race, especially since Tbilisi’s mayoral election took place not alone, but in parallel with other local elections in Georgia. In other Georgian cities the mayor is elected by municipal councils (Sakrebulos). That means that for a politician to be elected mayor in the provinces, he must first take control of the representative structures.

The most recent mayoral election in Tbilisi involved certain interesting procedural peculiarities which bear more in-depth consideration. In order to win this election, the candidate had to receive at least 30 percent of the vote. And only if two candidates managed this feat would a run-off be held. The appearance of this new procedural rule points to the political phobias of the Georgian president. During the 2008 presidential campaign, Saakashvili lost Tbilisi-home to more than a quarter of Georgia’s 4.5 million people-and racked up a victory only thanks to the provinces.

In Tbilisi’s latest mayoral election, the incumbent, Gigi Ugulava, won. He went into the election with the support of the ruling party, Saakashvili’s United National Movement. Ugulava's campaign began even before it was announced that he would be running on the ruling-party ticket.

Ugulava “made active use of the ‘administrative resource’ and of national television, which is controlled by the authorities,” said Georgian expert Zaal Andzhaparidze. “Moreover, despite protests by the opposition, Mayor Ugulava and Chairman of the Tbilisi Sakrebulo Zaal Samadashvili retained their posts during the election campaign.”

This naturally gave Ugulava a numerical advantage in the run-up to the election. But this is not the only reason for his success. The opposition was unable to put up a worthy candidate, or even agree on a consolidated candidate. As a result, Ugulava got the result he needed to become not an appointed, but a popularly elected mayor.

According to journalist Shorena Tsivkarashvili, “the political career of the former journalist and philosopher, the modest seminary student Gigi Ugulava, took off with lightening speed in 2004.” In 2004 Ugulava was appointed head of the presidential administration, and in July 2005 mayor of Tbilisi. He has long been mentioned as a possible successor to Saakashvili, although there has also been talk recently of a falling-out between him and the president. Be that as it may, the authorities simply do not have that many politicians in reserve. Today in Georgia there is active discussion of projects to change the constitution, projects that would concentrate real power the hands of a prime minister. But in that case, should Saakashvili become prime minister, he would need a president-confederate who shared his views. And that man would be Ugulava.

In any case, the results of the election have significance beyond the numbers. They showed that the ruling party has resources as well as a clear program of action (perhaps a bureaucratic program, but a plan nonetheless). The opposition has none of this. It has no new ideas and no new talking heads.

The results of the last elections in Georgia point to the emergence of one more politician of national importance. Will he want to play second fiddle to Saakashvili or will he dare to dispute his leadership? The new old mayor of Tbilisi will begin to answer this question very soon now.

Sergei Markedonov is an expert on the Caucasus and Central Asia.