In memory of a poet 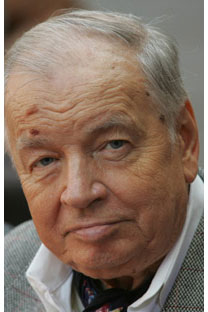 Much more will be written about Andrei Voznesensky’s contribution to Russian poetry. He will be the hero of biographies and dissertations, and definitively join the ranks of major 20th century poets. He will sit not only with the great Russian poets, but also beside names Lowell or Ginsberg. His poetry belongs to that future about which he thought and for which he wrote, and many more will speak of it.

Andrei VoznesenskyHowever, only contemporaries remember the living Voznesensky, and it is their duty, even if only now, to openly acknowledge that he embodied the moral traditions of Russian literature with a rare purity and fullness; that the human component of his gift was no less than the poetic; that, simply speaking, he was a very good man.

Of all of Pasternak’s lessons, Voznesensky mastered first of all the lesson of becoming an imitator. His main task was not to copy the genius in poetry, and in his work he managed to rejoice and to do good, to listen and to help, to teach and not to stifle, and to stoically endure the many torments that were his lot.

These torments were not only the critical howls that accompanied his work over many years, and not only Khrushchev’s yelling, which he suffered simply for his brilliance, but also his departure from this world, which was long and difficult. He was very sick for five years, surviving stroke after stroke, losing his voice. Vitality and success have their cost as the ray of glory that falls on a person transforms him in a strange way, affording him a special resistance to persecution and illness. While this makes living life easier, it makes leaving it harder. Voznesensky never lost his gift or his memory and managed to speak ironically of himself and to go on composing poems; I have rarely known a man so courageous.

I remember that at his last Paris reading three years ago, he arrived in a wheelchair, but then he got up and walked into the hall himself, leaning on the arms of friends. And even if this was for show, it was still magnificent. If only everyone, even out of vanity, comported themselves as he did!

It is hard to recall a purer life in contemporary Russian literature. In his record is not one dishonorable signature, not one betrayal of his talent, and if he did have honest illusions at various times, they, as it turns out, were often more fruitful than just sour skepticism. He never wrote anything for money. He dragged into view, counseled and supported several hundred poets, some talented, some not so very; his support could be too generous, but never absent-minded. He fearlessly exposed himself, experimented, honestly confessed in times of crisis, which he saw as a sign of growth, and was not ashamed to change. He was one of the few people in our country and in our time who behaved like a poet — and who understood that one must earn the right to that title every day.

His verses now speak for themselves. Everyone has their favorites, but several of his quatrains are known to every person in Russia. My Voznesensky selection consists mainly of poems from the 1970s, almost all of Temptation, and some from the last decade, from the additional volume to the five-volume work known as 5+ in which he collected all his bravest, merriest and craziest verses. When I recently reread The Ditch — Selected (1989) I was astounded at the richness of material, especially against today's anemic writings.

Spinning around in my head at the moment are two verses from Voznesensky’s best period, and, truth be told, the only summing-up of any life. The first: “Inexpressibly fine! But if one reflects — it was awful!” And the second: “How divine to live, how absurd!”