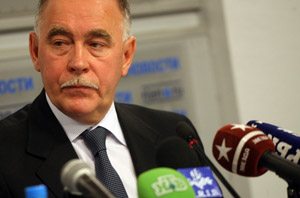 Chairman of the State Anti-Narcotics Committee and the head of the Federal Drug Control Service, Viktor Ivanov, in a special interview with Rossiyskaya Gazeta (RG), discussed how Russian President Dmitry Medvedev’s important initiative, to create an international coalition against the Afghan drug threat, will be embodied.

An international forum, Drug Production in Afghanistan: a Challenge for the International Community, will be held in Moscow on June 9-10.

Viktor Petrovich [Ivanov], how serious is the threat that the drug problem poses to our country, and why should Russia be the leader in stopping the Afghan drug threat?

The Russian president spoke about this problem in September last year during a meeting of the Security Council. In February this year, he stressed the necessity of improving the international legal framework for combating the drug threat. And, on April 14, while speaking in Washington, Dmitry Medvedev talked about the absolute inefficiency of measures which are being applied by the international community to combat the drug menace.

Is it possible we are exaggerating the danger level?

Last year, Afghanistan produced twice as many drugs as the entire world did 10 years ago.

More than 100 countries suffer from this problem, including Russia and the European countries. The global market for opiates is estimated at about $65 billion. Russia accounts for one-fifth of the total market. With 771 tons, European countries are the number one consumer of opiates, Russia holds the second place with 549 tons. Each year, drugs kill 10,000 people in Europe, which is nearly 50 times more than the number of combat losses of the European contingent in Afghanistan. In Russia, however, these numbers are even more catastrophic. We lose approximately 30,000 people annually, the vast majority of whom are young people.

Due to the fact that our country is the biggest victim of the Afghan drug production, Russia should be the one to lead an international movement for its elimination in form of an anti-drug coalition. This is not an exaggeration; the drug threat has become one of the main problems of the 21st Century - as serious as the Second World War was in the 20th Century. Therefore, resolving this problem without the joint efforts of the European Union, NATO and Russia is impossible.

Nevertheless, Russia and the NATO command have different approaches to the eradication of opium poppy in Afghanistan.

Yes, that’s true. For example, Mr. Holbrooke, US special envoy to Afghanistan and Pakistan, says that destroying narcotic plants in Afghanistan is not necessary. They, allegedly, create jobs for peasants, who are not part of the Taliban and do not kill American soldiers. But in doing so, he actually provides amnesty to the drug lords. A similar idea was expressed by NATO spokesman James Appathurai in March, according to whom it is impossible to take away the only source of income from the Afghan farmers without providing them with an alternative.

Moreover, NATO believes that combating drug production will distract the forces from the fight against terrorism. This is a deeply mistaken view. To the contrary, military actions have created favorable conditions the cultivation of opium poppy, for which there are always plenty of buyers. Today, the cultivation of opium poppy employs up to three-and-a-half million Afghan farmers, whose earnings are next to nothing. Meanwhile, a lion’s share of the drug money goes toward fueling terrorist and extremist groups in Afghanistan, and around the world.

What if NATO says, “Go ahead, send your troops and the drug police to Afghanistan and destroy opium poppy crops, meanwhile, we will take care of the Taliban”?

I think that solving the conflict in Afghanistan by force is impossible, and we should not take part in NATO’s military operations in that country. The main goal of our policy is destruction of poppy fields, which does not require throwing bombs. The US managed to destroy about 80 per cent of illegal coca plantations in Colombia by defoliation, by spraying the fields with special reagents. This way, nearly 230,000 hectares were freed from coca in 2008. In the same year, about 5,500 hectares of opium poppy plantations, which is about 3 per cent of the total area of its cultivation, were eradicated by the same means.

Could the cultivation of opium be made an unprofitable venture?

Making poppy cultivation be economically disadvantageous requires the destruction of up to 50 per cent of drug crops. We cannot but worry about the fact that while the Alliance forces, together with the Afghan soldiers, are cleaning the largest drug province of Helmand from the Taliban, there are three northern provinces where opium poppy crops are growing at an escalating rate. A large number of drug laboratories are located in the north. A closer proximity of the drug plantations lowers the cost for transporting the drugs.

The widely-known policy of avoiding the destruction of the poppy fields largely contributes to the growth of the illicit crops. The work that is being done to eradicate them is recognized as being ineffective and costly. Let’s try looking at the situation form the viewpoint of the Afghan farmers: profits from wholesome agricultural crops are not guaranteed, the risk of elimination of the illegal fruits of their labor has been significantly reduced; meanwhile, there are poppy buyers who are able to pay immediately. We have already seen how the Afghan farmers decided to solve this problem in the 2009 UN report. The conclusion is clear: the use of forceful methods for the destruction of drug crops and drug laboratories is necessary and justifiable. We are working on convincing the global community and our American colleagues of this fact.

Is Russia offering any specific measures?

Our seven-point plan, called “Raduga-2” (“Rainbow 2”), is known to everyone and has so-far been fairly agreeable. One of the specific proposals: chemical destruction of crops. For example, there is a well-known weed-killing agent, glyphosate, which is not harmful to a person’s health, but is able to kill opium poppy at the root. There are also administrative and legal measures, such as establishing inventory practices for the Afghan land owners. If the land is used to cultivate opium poppy, this means that the owner is probably involved in drug trafficking; therefore, the Afghan government has the right to confiscate the land.

Could barriers be set or drug laboratories?

In order to reliably trace where the precursors are coming from, it is necessary to label the chemicals. This will allow us to learn where the agents that are used in the production of heroin come from. The production of drugs calls for a large number of precursors, the transportation of which is easier to trace than drug trafficking. Certain acids, such as acetic oxide, are used as chemical reactors; meanwhile, transactions involving large volumes of these substances may indicate involvement in drug production. Labels could make it possible to identify the manufacturer and monitor the traffic route. Of course, simply monitoring the traffic routes of precursors and destroying the crops is not enough. We need to create an economy in Afghanistan and make investments into that economy. Since the advent of the coalition forces, no new infrastructure had been constructed, instead, the old infrastructure has been destroyed. The 142 facilities that were built by Soviet experts continue to serve as the foundation of the Afghan economy.

All these issues will be discussed that the international forum in Moscow, which will begin on July 9. It will be attended by heads of anti-terrorist and law enforcement agencies of various countries, state and political actors, well-known experts, Russian and foreign journalists, as well as representatives of the UN, CSTO, NATO, SOC and other international organizations. I hope that this meaningful forum will create a breakthrough in the assessment of the international community of this critical global problem.