Post-Soviet bloc reaches out to Kyrgyzstan 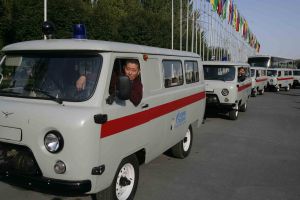 The post-Soviet Collective Security Treaty Organization will offer emergency assistance to law-enforcement agencies in Kyrgyzstan, where more than 100 people have died in four days of ethnic clashes.

"They have enough strength for today, but do not have enough equipment, helicopters, ground transportation, logistics and even gasoline, oil and lubricants," said Nikolai Bordyuzha, the group's secretary general.

Russian President Dmitry Medvedev said on Monday that the situation in Kyrgyzstan was unacceptable and called for firm action to halt the interethnic violence that has killed more than 100 people.

"The situation in Kyrgyzstan is intolerable, people have been killed, the bloodshed continues, riots along ethnic lines. This is extremely dangerous for the region, and therefore everything must be done to prevent these kinds of events - in accordance with the law, but firmly," Medvedev said.

The government in Kyrgyzstan said on Monday that 124 people had died in ethnic clashes that began in the southern city of Osh on Thursday and have spread to the wider region. Tens of thousands of ethnic Uzbeks have fled to neighboring Uzbekistan.

The security chiefs of the CSTO countries met in Moscow on Monday. Russian Security Council Secretary Nikolai Patrushev said the Kyrgyz representative thoroughly briefed the participants on the situation in the country.

"There was an active exchange of views, it was an analysis of the situation in the country," Patrushev told Medvedev.

After the security chiefs meeting, the CSTO said Kyrgyzstan's current steps were insufficient to deal with the ethnic violence and urged the interim government to take all necessary additional steps to quickly restore order in the country. The Russia-dominated grouping said that the secretaries of members' security councils "developed concrete proposals aimed at reducing ethnic tensions" to present to CSTO presidents.

"The efforts by the provisional government of Kyrgyzstan to stabilize the situation in the country are still insufficient," the CSTO said in a statement.

Kyrgyzstan's interim leader, Roza Otunbayeva, on Friday asked Medvedev to send Russian troops to help restore order in the south of the country, but so far Russia has only dispatched 150 paratroopers to beef up security at its Kant airbase near the capital, Bishkek.

"Of course, we must help them cope with these problems," Medvedev said, noting that the security council secretaries had developed proposals that CSTO heads of states would now review.

"We understand that it is a practical question," he said. "If everything happens regarding the restoration of order, we can restrict ourselves to this."

Medvedev said the fact that the CSTO had already met and discussed a coordinated response was already a good sign for Kyrgyzstan and the organization.

"In similar situations before we did this much slower," the Russian president said.

Bordyuzha told Russian President Dmitry Medvedev that if approved "as the top-priority measure to restore order, this plan will work." "But we offer a range of measures - right up to assisting in joint activities to identify the organizers of the riots and bring them to justice," he added.

The Russia-dominated security grouping also includes Armenia, Belarus, Kazakhstan, Kyrgyzstan, Tajikistan and Uzbekistan. The proposals adopted at the meeting on Monday of secretaries of the security councils of the CSTO members will be passed on to the heads of states for approval.