Only balanced measures can help the EU - Dmitry Medvedev 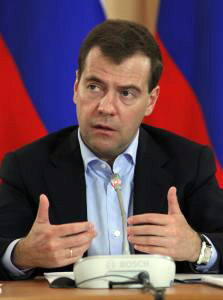 In particular, Medvedev spoke about the controversial bail-out plan, that will cost almost a trillion dollars, aimed at rescuing indebted European economies, primarily Greece, before they sank the rest of Union. The president said such measures are helpful, but only if applied carefully.

“You can’t destabilize economies; you can’t extend aid blindly in a situation where all has been lost anyway. You have to be sober in your reasoning,” he noted.

"Yet, on the other hand, you should take some reasonable measures to support a number of weak economies in order to save the general idea. And the general idea is the common European market and the common supranational European currency, the euro,” said Dmitry Medvedev.

“So, I think you shouldn’t contrast these things. Yet, indefinite solidarity and ineffective aid is, of course, a dangerous strategy. Eventually, it can undermine anything, even the European Union. Then even those countries that are not in danger today may face problems with solvency later,” added the President.

On the whole, the Russian President voiced his concerns that the current situation in Europe might be viewed as a second aftermath of the 2008 crunch. According to Medvedev, under the given circumstances there is no question of the failure of the euro, yet this possibility cannot be ruled out completely.

"I don't exaggerate the threat, but it can't be underestimated," said Medvedev.

Medvedev said Russia is closely watching the situation in Europe.
“Russia's prosperity, to a large extent, depends on how well things are going on the European continent," said the President in his interview to the newspaper.

However, when asked if Russia considers helping struggling European economies in case the crisis in Europe deepens, the Russian President answered that such help may come only as cooperation in some projects done together with the weak economies.

“Speaking about direct financial injections, it is desirable that these should be made by the EU partners,” concluded the President.