Belarus backs down on gas payments 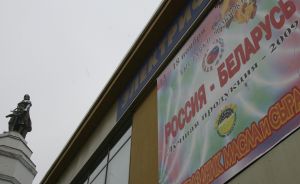 That was quick. Russia's state-owned gas monopoly began to cut Belarus off at 10am on Monday morning over an unpaid $200m in unpaid energy bill, but by 4pm Minsk had backed down and promised to cough up "within two weeks."

Not that Moscow was even going to accept this promise and actually went through with a 15 percent reduction in gas delieveries, saying it was not prepared to wait even two weeks.

As the news broke yesterday, journalists scrambled to cover the latest installment of Russia's "gas wars." However, the thing that came out of this story - apart from the fact that Minsk totally misjudged the situation - is that Russia finally "gets it" when it comes to international PR over the energy issues.

On the face of it, Moscow has acted very aggressively in order to force Belarus to pay. This seems to jibe with foreign minister Sergei Lavrov's promise in a leaked policy paper that Russia was putting its foreign policy on a pragmatic basis where there would be no more "gnashing of teeth."

There was gnashing aplenty on Monday, but the key is that Moscow forced the issue now when the minimum damage can be done, rather than in the middle of winter as in previous episode.

I suspect it was no coincidence that the deadline for the payment was set for June 21 - which happens to be the official first day of summer. In other words the demand for gas in Europe is at its absolute nadir for the year, and so even if Moscow followed through on its threat to cut 85 percent of Belarus' supplies, it would make no noticeable difference to Gazprom's clients in western Europe. Russia Today interviewed the head of Germany's gas company who said that the gas in storage was more than enough to cover any short fall.

And then there was the amount cut. In the last two showdowns-with Ukraine 2006 and Belarus in 2007-Gazprom simply turned off the taps completely from one minute to the next.

This time, from the very startm the maximum that would be cut was 85 percent. Moreover, the plan was to cut gas progressively in chunks of 15 percent over a period of weeks. Even more surprising was that the Kremlin was careful to flag the cutoffs head of time as the tension built over several weeks and went as far as informing its western partners before the gas volumes were reduced - something it pointedly forgot to do in the last two rows.

Taken all together, this is the clearest demonstration of Russian President Dmitry Medvedev's "business orientated foreign policy" and as a major improvement in the Kremlin's efforts to bolster its reputation as a reliable energy partner.

If you were going to characterize the issue in terms of personalities, then this gas show down is marked by Medvedev's liberal outward-looking and sophisticated approach to dealing with foreign investors as opposed to Prime Minister Vladimir Putin's inward-looking strong-arm tactics that characterize his "vertical power" way of doing things - not that it is likely that policy is actually driven by either man in isolation of the other. But still, this is another piece of evidence of the "new look" that Medvedev was trying to sell at the St. Petersburg forum at the weekend.

Finally the gas issue highlights another trend that has been in place since Putin was president: Russia has conceded any attempt at a "special relationship" with its former Soviet vassal states.

There is no reason - economically speaking — why Russia should subsidies the Belarusian economy (or any other country's economy) and it is remarkable that Gazprom has increased the prices for all its customers.

Having said that there are still marked differences in the price Gazprom asks for its gas, that is presumably based on the customer's ability to pay. Belarus has the cash to pay off its $200 million bill - Minsk reported this week that it has just under $6 billion in reserves, however, it needs to spend heavily on investment and with presidential elections looming this winter the government clearly wants to keep as much in reserve as it can to lavish on voters before they go to the polls.

If Gazprom insisted on the roughly $380 per thousand cubic meters it currently charges western European countries then it would precipitate a financial crisis in Belarus. The same is true in Ukraine where Tymoshenko did a deal in January 2009 to pay over $300 for gas which very nearly did precipitate a crisis - the state had to be bailed out by the IMF and the government started drawing down its special drawing rights IMF money to meet the monthly bill, only just squeaking through the year.

Indeed, the new gas deal that Ukrainian president Viktor Yanukovych cut with Gazprom a few months ago is highly significant as he managed to get a discount - the same discount Minsk is asking for - and reduced the price to about $250.

In this sense Ukraine is now the only former Soviet government where the Kremlin has entered into a "special relationship" with a former Soviet vassal where it is prepared to subsidies a foreign economy with lower than possible gas prices. Yanukovych clearly would prefer to have a special relationship with the EU, but Brussels, despite the friendly rhetoric, has failed to come up with any practical support whatsoever driving Yanukovych into Putin's arms as a result.