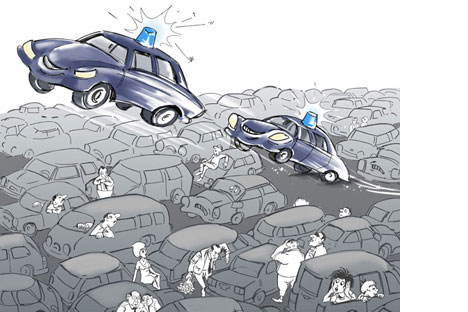 To obtain a blue light from the police, you should be a ministry official or duma member with very important business. Yet many Muscovites claim that for $10,000 and a little persuasion, you too can be a blue-light VIP.

But a small political revolution against the blue lights is underway on the streets of the capital; regular denizens have had enough. Owners of less expensive cars have been sticking blue buckets onto the roofs of their cars in mockery of the blue lights, which are known as “migalki” in Russian. The blue lights bought by semi-important people grant drivers the right to ignore rules, although only in an emergency, officially. But the VIPs driving them have run amok.

In protest, drivers have refused to move out of the way when an expensive sedan is charging toward them in the wrong lane. And a few people are attacking the cars, which stand doubled-parked outside the Kremlin. The blue bucket protests are the sensational result of a more mundane change appearing on the capital’s roads: Everyday drivers are finally learning some manners.

Following the collapse of the Soviet Union, the only cars on the street were Russian-made Ladas or the “other” Soviet car: the Volga sedan. However, as some businessmen managed to start shipping copious amounts of oil and metals across the borders, a few extremely expensive Mercedes came the other way. They started a trend, and multitudes of stolen Mercs followed them in the mid-1990s.

These days, thanks to ballooning incomes and easily available credit, the streets of Moscow are packed with every kind of car. The Mercs are still there, though now brand new and legally imported, but they are outnumbered by Fords, Daewoos and Toyotas.

Back in the 1990s, the average Russian was too busy surviving to worry too much about the driving habits of the very wealthy, but that is now changing as the middle class grows.

Drivers will still typically thrust themselves into a line of traffic rather than wait their turn, and crossroads are regularly clogged as cars get caught in the middle of the intersection when the lights change. But drivers are slowly beginning to relax as life gets better. A few drivers will now wait to let you out of a side road or make space so you can get across the lanes. If you offer similar courtesies, you’re likely to receive a quick blink of the hazard lights in thanks.

Without wanting to stretch the point, the blue bucket protest is arguably the a major sign of political awareness among average Russians. Car owners are among the best-organized grassroots political forces in the country, and have already staged mass protests over high gas prices, import tariffs and corruption among traffic police. They now are becoming increasingly proactive in their fight against the migalki-sporting elite.

Tempers flared in May when a top-of-the-line Mercedes S600, blue light flashing, ran a red light on Moscow’s Fifth Avenue, called Tversakaya, and rammed into a green BMW sedan. No one was hurt. It turned out the Mercedes belonged to a high official.

Predictably the police initially denied there was any accident, and the (unidentified) occupant of the Merc climbed into a jeep full of security men and sped off. However, the city cops ended up with egg on their faces after several witnesses posted pictures of the incident on Russia’s top social networking site LiveJournal.ru, and a storm of public protest followed.

It seems that such hot-tempered events are only pushing things further. The blue bucket protestors organized a demonstration recently, driving their cars around the city. Another group of young men have taken to hanging out near the Kremlin and attacking cars with migalki, running over the roof wearing a blue bucket on their heads and recording the incidents for the internet.

This is the middle class in action. They are now becoming increasingly proactive, and strange as it may seem, democracy in Russia today wears a blue bucket on its head.