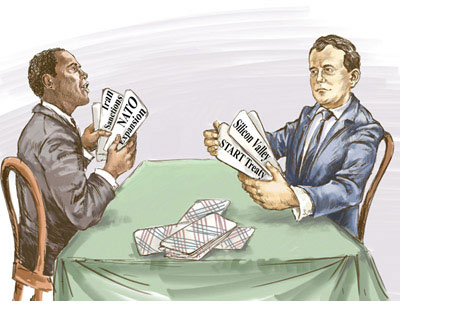 Last week, Andrew C. Kuchins launched his new book, “Russia After the Global Economic Crisis,” a series of essays on Russia edited by Anders Aslund, Sergei Guriev and Kuchins. On the day his book was released, Russia Now caught up with Kuchins at the Center for Strategic and International Studies and spoke with him about his views on the state of Russian-American relations and President Dmitry Medvedev’s visit.

Tell us about “Russia After the Global Economic Crisis.” What did you want to achieve with it?

This initiative goes back to my return to Washington after two years [as director] at Moscow’s Carnegie Center. Two things I saw when I got back : The discussion about Russia had gotten more polarized, and the Russia they talked about didn’t resemble the place I had lived, or how economic changes were having an impact on people’s lives.

This is a three-year project in cooperation with The Peterson Institute for International Economics. The first book was an overview … a short book, very readable. This time, we wanted to involve Sergei Guriev, an old friend of Anders and myself.

We thought it would be interesting in the second edition to get more voices from Russia, the best and brightest of Russia today, talking about military reform, climate change, technology and innovation ... We were working on this during the nadir of the crisis and I made a prediction. I anticipated that Russia would have emerged from the crisis [by the time the book was released], and it has!

From your perspective, is there a general change in the relationship between the United States and Russia? What does each side need to do to continue on this path?

The so-called reset of Russian-American relations has been quite successful, even more successful than I had expected.

One area that is lagging is bilateral economic relations. President Medvedev's focus will be to help advance that agenda—both the economic component and the bilateral relationship. The efforts they are promoting for modernization may be one of the biggest highlights, something analogous to Silicon Valley.

But this creation of a Russian Silicon Valley is not going to be easy. It sounds tough.

For sure it’s going to be tough. Russians have been talking about diversification. So far there is not much evidence of success. But if Russians are able to come away with some support from U.S. entrepeneurs, this would be something.

What are some signs of Russia moving forward with their innovation agenda?

When Prime Minister Vladimir Putin announced a customs union with Kazakhstan and Belarus, that completely undermined the innovation agenda. There is not a reasonable economist in the world that could justify that scenario.

Over the past year, they have walked this back and seem committed to economic trade and this is a very important signal.

But you believe that relations will continue to improve?  Some of your peers still talk about Russia in line with the four horses of the apocalypse.

I have moved from being cautiously optimistic to unqualified optimism.

When the Obama administration came in, relations were at their lowest point in 25 years. In a deep freeze … after the war in Georgia it hit bottom.

Obama's folks faced the greatest challenges and came with a pragmatic mindset. Russia also took the position that because of a number of global challenges we face, we have to have a more constructive relationship. I had expected that obstacles would be mitigated. But the impact of the global crisis had a huge sobering effect.

Russia had been dizzy with success and they felt the United States was on the wane. Then Russia was more subject to the crisis than they expected. It put everyone in a problem solving mode: The new START treaty was signed and U.N. sanctions were taken against Iran ...

The momentum has accelerated in the past few months. Russia feels vindicated that the color revolutions were unsuccessful. Obama is more open to let forces in Ukraine [and Russia’s neighbors] play out.There is a dramatic contrast to what we are seeing now from the old narrative. There is a sense in Moscow that Americans are not going out of their way to thwart Russia.

We know what Medvedev’s hopes are for this visit. Does Obama have any expectations? Or is he just receiving him politely?

That’s a good question. This is more than receiving him politely … He wants to get some things done with Dmitry Medvedev. Obama appreciates that there is nothing like success to help develop a relationship.

Andrew C. Kuchins is director and senior fellow of the CSIS Russia and Eurasia Program.