Kremlin pushes ahead for army reform 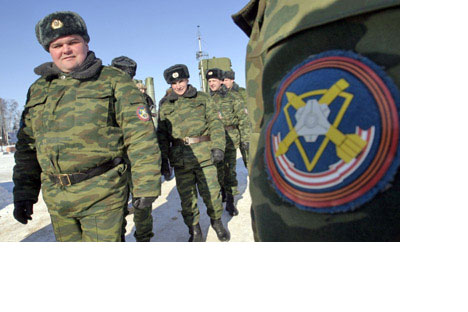 Military reform has returned to the top of the domestic political agenda. Will money and modernization be enough to turn low morale around?

“If we do not take measures in the near future, the Russian Army will turn into the Pope’s guard, which looks nice, but is not actually dangerous,” complained Yury Baluyevsky, deputy secretary of the Russian Security Council in April.

Russia signed a new nuclear strategic arms reduction treated with American in April, but since the start of this year it has also launched a massive $430 billion program to completely re-equip its conventional forces over the next 15 years.

The government has no choice: independent defense analyst Pavel Felgenhauer said: “Russia is finding agreement with the West, but it needs a strong army to be taken seriously,” he explained.

The reform effort has been building slowly in recent years. The standing army was cut from 1.3 million to 1 million in 2008, and more recently the number has been reduced again by pensioning off those willing to go. On the flip side, those who stay will enjoy a pay raise and new housing starting in 2012.

This February, Medvedev signed off on a new military strategy which aims to completely re-equip all the armed forces. Starting from this year, 10 percent of antiquated arms will be replaced, rising to 70 percent by 2020.

Prime Minister Vladimir Putin said at the start of this year that the government will spend $38.5 billion on new planes, guns and tanks. The sum still cannot be compared with those of NATO countries, said Baluyevsky. The United States alone spends over $700 billion a year on its armed forces.

Yet the goal of Russia’s military spending is broader: The investments are an integral part of the president’s modernization program. Russia wants to lift the technology of some of the world’s more competitive military producers, most noticeably four Mistral helicopter carriers from France, in a deal closed in 2010, to improve its own weapon systems.

“We have never had ships of this level. We believe that such high-technology hardware can be bought so as first to learn how to use it and then possibly even start manufacturing it on our own territory,” Russian Defense Minister Anatoly Serdyukov said on Rossiya 24 news television channel after the deal was closed.

Arms exports have also become part of Russia’s foreign policy. Its two biggest clients remain China and India, and the Kremlin is now roping these partners into joint venture deals to tie their economies more closely together. For example, India is partnering with Russia to jointly develop the T-50 fifth-generation fighter.

As Felgenhauer pointed out, the bulk of Russian weapons exports are low-tech arms: “many from former-Soviet stockpiles,” which are sold to less-developed countries. The concern is that the “export revenue is not being channeled back sufficiently.”

However, Felgenhauer noted that only reform toward a fully professional army will play well with the domestic political audience, which sees its sons called on to serve one year’s national service in a military with a poor reputation for the treatment of young cadets.

“Compulsory service is an issue that affects people’s lives very directly, whereas the idea of a new battleship costing millions is rather abstract for most,” he said.