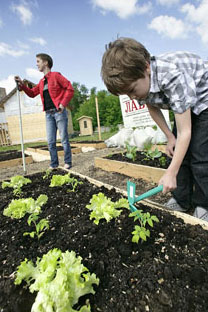 A group of Muscovites are planting vegetable gardens in a former industrial zone near Kursky Station, not far from the Kremlin.

First lady Michelle Obama planted an organic vegetable garden next to the White House last spring to raise awareness about healthy eating. Now a group of Moscow gardeners and foodies hope to get across the message of growing food locally while reclaiming a former industrial zone near Kursky Station. The project offers urbanites a chance to tend their own greens.

This month, enthusiasts opened the Ogorod garden, 24 small plots sitting side by side in an area on the periphery of the old Arma gas factory on Nizhny Susalny Alley. Although there has not been any heavy industry in the factory area since 2002, the space around the red-brick 19th-century buildings remains underused and somewhat gloomy.

“The idea of reclaiming factory space and turning it into a garden really appealed to us,” said Boris Akimov, a food aficionado who runs Lavka Yeda, a company that takes and delivers people’s orders for meat, dairy and other country food produced by small farmers.

Lavka Yeda, which has an office on the Arma territory, rented the land for the Ogorod garden and has already rented out 14 plots.

Nobody has requested the deluxe treatment yet. “Tenants who consistently neglect their plots will be kicked out,” said Lilia Dzhebisashvili, who is the garden’s coordinator.

Since the small plots are close together, people will not be allowed to grow plants like pumpkins or squash, which require space. Cannabis is also not allowed—“only things that are legal,” Dzhebisashvili said.

“We plan to add another 300 square meters eventually, and if the city gardening idea catches on, we’ll expand to another area,” she said.

The garden will not make any money from the plots but hopes to turn a small profit by offering various gardening workshops and other events.

“Some people often don’t even know where food comes from and what it looks like before it hits the stores,” said Mikhail Vorobyov, who will act as a consultant for gardeners who lack green thumbs. Vorobyov also hosts two radio shows about dachas and gardens.

Akimov said he hopes to pick up on a trend of organic food that “began in the West already 10 years ago” and make people approach their food choices with more responsibility.

Michelle Obama’s decision to turn the White House South Lawn into an organic garden last spring was a move to encourage healthful eating and sustainability and earned praise from nutritionists and worried parents.

The Arma factory is a vast territory that was built as a gas streetlight enterprise in 1865 and made gas equipment in the Soviet era. Industrial capacities moved out in 2002, and the space is currently rented out to dozens of firms, including Lavka. “They support us,” Akimov said of Arma’s owners. “They want the space to be developed creatively.”

The garden sits against the far wall of Arma, next to an empty plot with some construction debris that is rumored to soon become a tennis court. The garden’s founders had to buy topsoil through an intermediary that is licensed through the Moscow city government.

While most plots were empty Wednesday, some had rows of lettuce, tomatoes and other greens planted for Lavka’s own use. Plants can be ordered from a partner of the project, Moskovsky Agroholding.

Vorobyov dismissed fears of pollution. “Any apple you buy at a supermarket might be grown far from the city, but it receives chemical pesticide sprays, many of which are poisonous,” he said.

His confidence didn’t sway Polina Kozlovskaya, a journalist who decided to get a plot since she does not have a dacha where she can garden.

“I am going to plant medicinal herbs,” she said. “But I wouldn’t plant tomatoes here in the center of Moscow.”

Previously published in The Moscow Times