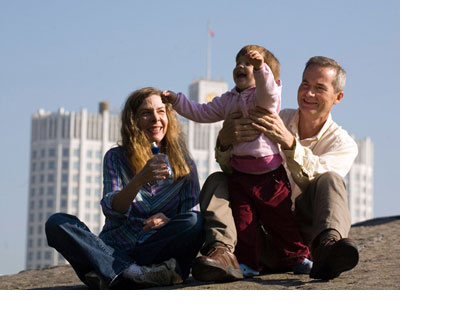 American adoptive parents play with their Russian-borndaughter in Moscow

American and Russian negotiating teams met in Washington, D.C., last week to advance the bilateral adoption treaty between the two countries, offering new hope and momentum to a process fraught with difficulties. Foreign adoptions of Russian children by Americans had been in peril in recent months as a recent case of apparent abandonment once again revealed gaps in the system.

Both countries agree there is a need for stricter enforcement of post-adoption inspection, agency licensing and accreditation, and the creation of a joint oversight body. Negotiations were slated to put an end to independent adoptions from unaccredited groups.

U.S. foreign adoptions of Russian children were extremely vulnerable to being shut down in recent months: Russian government officials threatened to cease adoptions by all foreigners. The ongoing adoption cases were put on hold by the Russian courts following the Kremlin’s representative announcing de facto suspension to the press. The international adoption community was bewildered by the suspension, yet concerned with the lack of regulation in the international adoption laws.

Russian officials confirmed there is no imminent moratorium on foreign adoptions from Russia. Still, such proposals exist in the Duma, or Russian parliament, should the United States seem to be stalling on the bilateral agreement.

Generally, adoptions by foreign citizens rescue Russian orphans from a lonely life. According to Russian law, foreigners may adopt only the orphans who didn’t find a Russian adoptive family. And while more Russian families are willing to adopt, the numbers are still very small.

Currently, there are 600,000 orphans in Russia: 138,000 are waiting for an adoptive home in an orphanage, the rest are in foster care. Mary Graber gave a loving home to a girl from Russia: “My daughter is a regular teenager—she plays soccer, has good friends. The fact that she spent a year in an orphanage really doesn’t matter any more.”

Graber is also a director of family resources at the International Assistance Group, Inc., an accredited international adoption agency specializing in adoptions from Russia. She gets grateful letters from adoptive parents telling how well the children are doing almost every day.

Failed adoptions are the dramatic exception. Of the 60,000 children adopted in the United States, 17 have died at the hands of their parents. Most of the deaths of Russian children adopted here occurred in the cases of independent agency adoptions. It is clear that independent, rather than accredited agencies, raise a red flag: There is frequently less post-adoption monitoring of adoptive families.

These children fell through the cracks. Some were treated with neglect, even cruelty, that caused their death. In 2006 in Virginia, Peggy Sue Hilt killed her 2-year-old adopted daughter by repeatedly punching the child in the abdomen and stepping on the child. In 2008 in Utah, Kimberly Emelyantsev killed a 14-month-old adopted Russian son with Down syndrome by causing a blunt-force trauma to the child’s head.

Another worrying development—the Russian government said it is missing paperwork for 240 cases of adoption. In other words, no one knows what happened to 240 Russian children adopted in America.

This is why the state of foreign adoptions is so vulnerable in the United States, despite tens of thousands of good adoptions. Orphans and institutions are also susceptible to abuse. America's lack of regulation and independent, even rogue agencies could serve as a lesson to countries whose citizens hope to adopt more from Russia.

The recent child abandonment story of Artyom Saveliev gave the treaty new momentum. A single mother from Tennessee, Torry Ann Hansen, adopted Artyom Saveliev in September 2009. After eight months in the adoptive home, the child was put on a plane to Russia with a note to void the adoption. This total indifference to the child’s welfare brought the case to international attention.

Russians have been outraged that Hansen has not been charged with any crime. The National Council For Adoption (NCFA) filed charges against Torry and Nancy Hansen. The investigation will “determine if the actions constitute criminal abuse, neglect or endangerment of Justin Hansen (a.k.a. Artyom Saveliev).” Additionally, Hansen’s adoption agency, the World Association for Children and Parents, is being investigated and its Russian license has been suspended.

Torry Ann Hansen complained that Artyom made her fear for her safety. “This child is … violent and has severe psychopathic issues,” the note said.

“When Artyom returned to Moscow, it became obvious that there is no control at all over the post-adoption life of a child,” Krasnova said. In Moscow, parents who try to return a child turn up at the orphanage; but only a court can end an adoption, according to Krasnova.

Currently, the two countries have gone through two rounds of negotiations with Russia and America presenting their drafts of the agreement. Russia already agreed to an American proposal to have adoption agencies first be accredited by the United States according to the Hague Convention.

The Russian and American agreement will provide clear guidelines for pre- and post-adoption procedures, improve transparency and establish a central authority that bears responsibility for an adoption.

Kremlin children's rights czar Pavel Astakhov said that independent adoption agencies need to be abolished. There will be fewer agencies operating with stricter rules and enforcement of post-adoption inspection. He also mentioned a need for a joint oversight body to review all U.S. post-placement reports.

Russian officials expect the agreement to be finalized by the end of 2010. “Our goal is to sign the agreement as quickly as possible and continue adoptions,” Astakhov said in an interview with Russia Now. Realistically, however, the process will take longer than two months.

While researching images for the June issue of Russia Now, photo editors came across a compelling image of an American adoptive family with their new daughter in Moscow. The editors soon discovered that the anonymous photo was the work of acclaimed Russian photographer Dmitry Chebotayev, who took this intimate photo of Cathy Taylor and Greg Farrell, and their daughter Irina.
Read on —>>