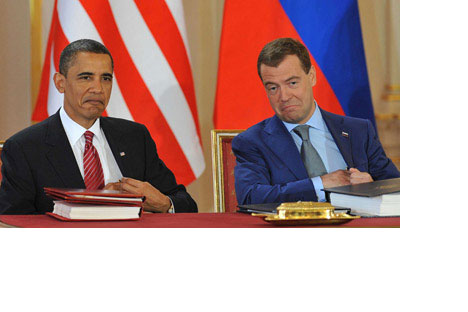 Avoiding the worst: Presidents Barack Obama and DmitryMedvedev upon signing the START nuclear reduction treatyearlier this year in Prague

President Dmitry Medvedev’s visit is the first in modern history that is not focused on geopolitical issues, but rather on economic and technological ones.

It is unusual for Medvedev to make the nation’s capital his second stop on a trip. His first stop this week is San Francisco, and more precisely, Silicon Valley. Medvedev is to meet with leading American entrepreneurs interested in opening or expanding business with Russia. And for the first time in this relationship, we may see a focus on technological cooperation rather than investment in oil and gas.

His travel plans reflect the essence of his main agenda, namely innovative and technological breakthroughs for the Russian economy and reduced dependence on fossil fuel, in order to catch up with the developed world.

There are no significant obstacles for such an agenda. First, the current U.S. administration declares a “pragmatic” approach in world affairs. This means it is no longer a priority to irritate Moscow over sensitive issues such as human rights or democratic values, which were among the favorite topics of the previous administration. Second, Obama’s administration pays less attention to the post-Soviet neighbors. Russia has visibly improved its relationship with Ukraine since pro-Russian Victor Yanukovich won the presidency, and Russia has toned down tensions over Georgia—partly because the Obama administration is not so keen to support each step taken by the “Rose democracy” state.

A change in focus on these issues has helped the United States create a more workable relationship with Russia and eliminate the excessive passion that characterized the previous decade.

As a result, the two sides signed the new treaty on strategic arms control, which was important for the Obama administration since it prioritized non-proliferation and nuclear weapons reduction. In May, Obama returned to Congress an agreement on peaceful nuclear cooperation, one that had been removed by the Bush administration after the Georgian events in August 2008.

But the greatest evidence for this approach was demonstrated very recently when the United Nations Security Council voted for a new resolution enacting tougher sanctions against Iran, which the United States had long discussed with China and Russia.

Russia may now expect something in return and, considering Medvedev’s agenda, this might be an appeal for better economic cooperation, particularly in technologies.

The problem is that Washington may be indifferent to such cooperation. The impact of the Russian economy on the United States is so small, compared with that of Europe, China or some Latin America countries, that it garners very little attention.

Recently, Russia has been paying considerable attention to the world practices of transforming “old-fashioned” economies into innovative ones—which is why Medvedev’s trip starts in California. Yet not everyone in Russia recognizes that it took decades for the United States (or other countries such as India or Brazil) to create remarkable innovative clusters.

Silicon Valley is not a building or a workshop that provides advanced technologies under Obama’s plan or congressional approval. Rather, hundreds of companies, some fledgling, some mature, are part of an infrastructure focused on innovation. This infrastructure also involves mutual trust among economic agents and confidence in their future.

In the United States, it’s not the president who is responsible for the business activity and success. That is why it will be difficult for the Russian counterparts to compel American entrepreneurs to expand business with Russia—even if Medvedev is able to bring Obama on board.