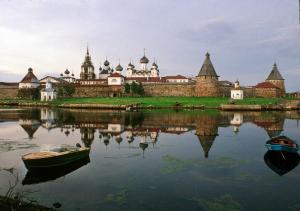 In the vast territory of the Russian north, no place carries more historical weight than the Solovetsky Transfiguration Monastery, located on Great Solovetsky Island, part of an archipelago in the southwestern part of the White Sea. The islands form one of the most curious natural environments in Russia. Although buffeted by northern winds and sea currents, the same currents also moderate the northern climate and produce a rich ecological diversity.

The archipelago's first known Russian settlement dates from 1429 when the monk Zosima joined forces with Herman, an illiterate hermit who had periodically visited Solovetsky Island. The elderly Zosima died in 1435, but the following year another monk, Zavvaty, returned to the island and founded a monastery dedicated to the Transfiguration of the Savior. During this early period, the monastery belonged to the domains of the Russian city-state of Novgorod, but after Novgorod’s subjugation to Moscow in 1478, the Muscovite grand princes reaffirmed the strategic importance of this remote monastic outpost.

The great flourishing of the monastery occurred in the sixteenth century under the direction of Philip Kolychev, a Moscovite monk of noble origins who left his privileged existence in 1537, joined the Solovetsky monastic community, and in 1547 became its spiritual leader (hegumen). During the next 18 years, Philip guided an ambitious program of construction that transformed the monastery and created monumental buildings of stone and brick such as the great Cathedral of the Transfiguration of the Savior (1558-1566) and the Refectory Church of the Dormition (1552-1557), among the most impressive manifestations of late medieval Russian architecture. He also initiated a series of projects, including canals, that improved the position of the monastery as a self-sustaining community. In the summer of 1566, he was called back to Moscow by Ivan the Terrible, who supported Philip’s appointment as metropolitan, at that time the highest position in the Russian Orthodox Church. Philip's resistance to Ivan's misrule led to his exile and execution in 1569.

Nonetheless, construction at the monastery continued after Philip’s death. Other late sixteenth-century churches in the monastery include the Church of St. Nicholas (1577; razed and rebuilt in 1830-1834); and the Gate Church of the Annunciation, built in 1596-1601 over the west gate and still standing, although much modified in the nineteenth century. Between 1582 and 1594, monks and hired labor manhandled thousands of granite boulders into place as the great walls and round towers of the monastery arose from the marshy ground.

Despite the conflicts of the seventeenth century, the Solovetsky Monastery remained one of Muscovy’s most prestigious and the privileged religious centers, closely connected to the court. It received many donations, the churches were repaired, and other buildings were added in the eighteenth century. During the nineteenth century the monastery became a major pilgrimage site, with its own steamship and hotel.

After the end of the Russian civil war in 1921, the Bolsheviks expropriated the monastery. Two years later, a fire of mysterious origins spread throughout the central stone churches and reduced their interiors to ashes. it was here, in 1923, that the Soviet regime established the first concentration camp. Superseded by larger camps, the Solovetsky camp closed in 1939, and the territory became a military base. Modest attempts to restore the monumental Transfiguration Monastery began in the 1960s and in 1992, Patriarch Alexy II re-consecrated the relics of the monastery’s founders with solemn ceremony.

In the summer, this far northern monastery is suffused with an unending display of light that illuminates all sides of the citadel and its churches, and gives added meaning to the monastery’s dedication to the Transfiguration, the miracle of divine revelation and light.

The traditional way to reach the Solovetsky Islands has been by sea from the Karelian town of Kem. There is now an aerial option on a twin-engine airplane from Arkhangelsk's Vaskovo Airport.