A Russian paradise in Turkey 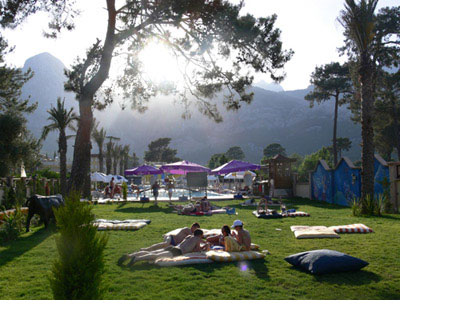 One of the singularities of the Russian soul is its genuine belief in the possibility of heaven on earth. This faith has been passed down from one generation to the next. Even in Russian fairy tales miracles happen not “long long ago” as they do in Western European tales, but in the “thrice-nine kingdom”. The tie to a place is palpable. A place where dreams come true, somewhere nearby, you just have to find it. So let’s look. In tsarist times peasants went in search to the East, to Siberia, thereby expanding Russian territory.

When the free territories ran out, they decided to build a paradise at home — a communist society of general abundance and equal opportunity. In the event, the attempt was unsuccessful, but thanks to it earthly paradise in the minds of Russians assumed a specific location — the United States and countries in Western Europe. From behind the Iron Curtain came half-mythical rumors about 30 different kinds of sausage in the shops and other boons of Western civilization. The rare lucky ones who were able to leave the Soviet Union for good were given going-away parties as if they were going to the next world. Their friends would never see them again; the only consolation was that they would land in paradise.

When the Iron Curtain collapsed, it turned out that Russians were not especially welcome in the West and that people there had plenty of their own problems. It seemed that the dream about a heaven on earth would die with the USSR. But in a completely unexpected twist, that empty place was filled by Turkey. The first Russian tourists to return from there told fantastic tales about an “all-inclusive” system: you pay once then eat all you want. For a Russian, permanently frustrated by the constant shortages of the most indispensable things, a system like this seemed like a miracle. No wonder that at first they tried to eat all they could (and more) on the principle that if they couldn’t finish it, at least they could taste it. In his heart of hearts every Russian firmly believes that anything good is bound to end soon, so you should get all you can while the going’s good. But this rule of Russian life did not apply to Turkey and little by little everyone went there.

Here one should explain one important point: the Russian definition of the ideal vacation. Primarily it is the sea. You would think that in a vast country like Russia there would be plenty of places where one could have a lovely vacation in nature: quantities of rivers, lakes and forests. But anyone can go to places like that, so they aren’t that interesting or prestigious. The nearest beach to Moscow is a two-hour plane ride at least — Russia is, for the most part, a northern country. In Soviet times, to get a permit to go to a guest house on the Black Sea, you had to be a cosmonaut or a famous actor. Everyone else had to rough it: you had to rent whatever room you could find from a local, often without the most basic amenities. The main thing was the sea. Today a vacation in Sochi is still off-limits to most, only now it’s because of the price. Good service on the Black Sea costs more than it does in Turkey. What’s more, Turkey’s famous all-inclusive system means that even a vacationer of modest means can feel almost rich for a week and deny himself nothing. It’s amusing that when Russians went on to explore Europe (after Turkey) their main disappointment was the “continental breakfast” — a croissant with butter, jam and coffee. “Why so little?” they moaned, now used to abundant smorgasbords. Travel agents wore themselves out explaining that Europe is not Turkey and you won’t be able to eat all you want there.

It’s hardly surprising that Russian tourists prefer to put their money into the Turkish economy: statistics show that every year some three million Russians vacation in Turkey, spending a total of $3 billion on average. Russians are the most desirable shoppers in Turkish shops. They buy a lot of everything that’s produced locally — leather, textiles, sweets. The Turks have taken note and are anxious to oblige: now Russian is virtually the official language at many local spas. Antalia has a Russian school; there is a Russian radio station and a Russian television channel. Russians feel at home in Turkey, and Turkish men with Russian wives are a common sight.

This season Turkey has gone even further and abolished visas for Russians. Even before, Turkish visas were a mere formality that involved paying $20 and getting a stamp in your passport at the border. Now Russians won’t have to do even that, although the Turks will lose several tens of millions of dollars as a result. But for the sake of Russian clients who are dear (in all senses of the word), the Turks are willing to forego a few dollars. Especially since those grateful tourists will no doubt compensate them for their generosity.

“It seems that things in Russia are pretty good,” a Dutch tourist remarked to me one day on a Turkish beach. Yes, judging by the number of Russians in five-star hotels, the financial crisis here would seem to be over. Or perhaps it’s just that a vacation by the sea is the last thing Russians are willing to give up? In the end, for the chance to live in paradise one can easily sacrifice.

Svetlana Smetanina is a Moscow journalist and observer of life able to see something good in even the most hopeless situations.