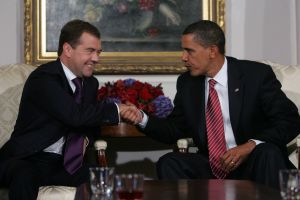 Eighteen months have passed since it was declared that the strategic direction of Russian-American relations had been “reset.” The frequency with which that word is repeated is comparable with such words and phrases as “détente” or “the new thinking” in previous eras. Has much been done to extricate bilateral relations from the impasse at which they were during the last years of the presidencies of George W. Bush and Vladimir Putin (who became prime minister in 2008)? There is no unequivocal answer to this question. On the one hand, we have the rapprochement in positions on Afghanistan and Iran and the signing of a new treaty on strategic arms.

But on the other hand there remains a mutual distrust in matters of post-Soviet geopolitics—differences of opinion on Georgia are the most obvious example. One would think that Moscow and Washington would have come together over the crisis in Kyrgyzstan and the worsening of the confrontation in Nagorno-Karabakh, which did not affect US-Soviet relations during the Cold War, but alas, the concept of a “zero-sum game” has not been entirely overcome and this fact has inhibited both Russian and American actions and reinforced the security vacuum in such strategically important regions as the Greater Caucasus and Central Asia.

In this respect, Washington’s decision to include Doku Umarov, leader of Islamic radicals in the North Caucasus, on its list of international terrorists is a sign of the “reset.” Although this sign should not be overestimated, it is certainly welcome. The United States has not made a similar step in Russia’s direction since, perhaps, September 2001. And nine years ago, US politicians and diplomats were far more restrained in their assessments of the “Chechen resistance.” Official Washington’s decision is all the more valuable in that Russian President Dmitry Medvedev considers the North Caucasus to be his country’s “main domestic political problem.”

What prompted the American decision is also interesting. According to the State Department’s counterterrorism coordinator Daniel Benjamin, who is also an expert on Islamic fundamentalism: “The recent attacks perpetrated by Umarov and his operatives illustrate the global nature of the terrorist problem we face today. We stand in solidarity with the Russian people in our condemnation of these deplorable terrorist acts.”

Since the Beslan tragedy in September 2004 the main anti-Russian statements on the North Caucasus have been made not under slogans of ethno-political self-determination, but under the green flag of radical Islam. On October 31, 2007, the president of the so-called “Chechen Republic of Ichkeria” relieved himself of his duties as head of that separatist state and inaugurated a new entity, the “Caucasus Emirate.” Umarov pronounced himself “the only legal authority over all territories where there are mujahedin.” He announced as well that he was disavowing all laws of the secular authorities in the North Caucasus. He went on to declare that “ethnic and colonial zones known as ‘North Caucasus republics’ are outside the law.” But to consider Umarov and his confederates Islamists in the complete sense of the word is problematic. They lack the requisite theological preparation, and in some cases even the most basic education. As the Orientalist Sergei Davydov has rightly noted, “the leaders of the Algerian jihad knew at the very least how to write a sermon; the flagrant ignorance of the authors of certain North Caucasus Islamist websites has already been subject to the cruelest derision on the part of their opponents.” For such laughable spelling mistakes and attempts to welcome the unled to the world of the “scholars” of the titular prophet Mohammed, says Davydov, “even a village mullah in Iran or Turkey would be sent back to retrain.”

That may be, but the ideals of “pure Islam” underlie the anti-government protests of these unschooled Islamists. With the help of these ideals, they have managed with a certain effectiveness to mobilize the extremist potential. Unlike their nationalist predecessors, supporters of the “Caucasus Emirate” see not only Russia as the enemy, but also the Western world and Israel. In one of his video addresses, Umarov stated: “I don’t think it’s necessary to draw a border for the Caucasus Emirate. First, because the Caucasus is occupied by infidel apostates. Second, after banishing the infidels we should take back all historically Muslim lands, and those borders are beyond the borders of the Caucasus.” Umarov and his comrades-in-arms include their fight in the North Caucasus in the context of the global jihad: “We are an integral part of the Islamic world… Today in Afghanistan, Iraq, Somalia and Palestine our brothers are fighting. Anyone who attacks a Muslim anywhere is our enemy, our common enemy,” Umarov has said. Given this, it is entirely understandable and explainable why Umarov sees the United States, Russia and Europe as enemies. And if Umarov and his confederates lack the resources for actions against the West, Russian citizens in Moscow, Kizlyar and Nazran have already felt the practical consequences of the shift from ethnic nationalism to a defense of “pure Islam.” Meanwhile, next in line after Umarov, who is not overly versed in theology, are prepared preachers who meet the standards of the mujahed of the future—literate theologians who know how to use both TNT and a Kalashnikob.

Of course the US State Department’s decision to include Umarov on its list of international terrorists will not solve all the problems of violence in the North Caucasus region. Many of these problems are of a systemic domestic nature, and to overcome them will depend on the volition and quality state administration of Russia itself. And the step Washington has now taken cannot be seen as a manifestation of geopolitical altruism; it is an acknowledgment of a shared interest with Washington’s Russian partners, but that interest is determined by the views of the American establishment. However, it is a good symbol, a symbol that overcoming the “zero-sum game” is potentially possible, and that the “reset” is not just a successful creative decision by political technicians.

Sergei Markedonov is a Visiting Fellow at Center for Strategic and International Studies (CSIS), Russia and Eurasia Program, in Washington, DC.