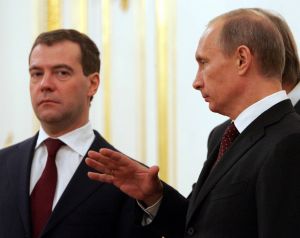 At Stanford University last week Medvedev named the conditions under which he would run for re-election in 2012. “If the plans that I formed have been implemented, if there is popular support (and that is the main thing for a politician, including in considering a second term), and if there is a desire to do this, then I do not rule it out for myself,” Medvedev said.

This is the most definite statement Medvedev has given about the possibility of proposing his candidacy for a second term.

Conversations about how the Medvedev-Putin tandem will assign roles in 2012 began in September of last year. Talking to political scientists from the Valdai Club, Putin promised to come to an understanding with Medvedev as to who would run; he did not rule out the possibility that it could be him. Two weeks later, Medvedev announced that he did not rule out proposing his candidacy if he managed well in his first term and if he had popular support. A few days after that, Putin promised to make a decision about the 2012 elections depending of the effectiveness of the work — his own and Medvedev’s. At the same time, the prime minister said about the president: “I have known him for a very long time and I know that he is a very honest man and view his political future based on the country’s interests.”

Unlike the president, Putin has advised people not to follow the ratings. “The biggest mistake would be to subordinate our present work to the interests of future election campaigns,” Putin said in December. He added that a person thinking in terms of a future election campaign cannot take the decisions necessary for the economy. Putin promised to think about running; later that day Medvedev announced: “Putin said that he does not rule out this possibility, I would also like to say that I too do not rule out this possibility.”

The intrigue will continue to the end, said a member of the presidential administration. He added that in any case, Medvedev was being brought nearer to the United Russia party: The president recently met with 150 party members, an unprecedented number. The final decision will depend on many factors. But for now it seems as if Medvedev will remain, said the official.

Opinion polls show that “people” vote for Putin, not Medvedev. The deputy head of the Levada Center, Alexei Grazhdankin, noted that whom to vote for and who was doing the best job were two fundamentally different questions. He said that in the understanding of citizens, Medvedev is playing an ornamental role. And although he is managing with his duties, Putin is preferable as president. At first, in the ratings of confidence, the distance between Putin and Medvedev was far greater.

But now that Medvedev has improved his positions, that distance has shrunk, said Valery Fyodorov, general director of VTsIOM. In the opinion of citizens, Medvedev coped well with the two main crises of his presidency so far: the war with Georgia and the economic crisis. Medvedev’s rating has gone up significantly, agreed political scientist Mikhail Vinogradov.

A high-ranking Kremlin official remarked that sociologists’ yardsticks with regard to the elections are not weighty arguments for the Kremlin: The next elections are still a long way off and as yet there is no list of candidates. Other yardsticks are more significant — how much citizens trust a leader and approve of the job he is doing. That is the sort of sociology that the president watches, the official maintained.

To Medvedev’s advantage is the age difference between him and Putin. In 2012 the prime minister will turn 60, whereas the president will be 47. According to a poll conducted by the Levada Center, most citizens agree with the idea of placing a maximum age limit on the presidency of 60 or 65: 40 percent would fully support this, 31 percent would probably support it, as opposed to 18 percent who would not. True, for Russian citizens, Putin is ageless; they do not compare his age with the elections, said Vinogradov.

Ratings in Russia can be managed. If they begin showing Putin on television three times as often as Medvedev, the distance between them will grow, Grazhdankin said in conclusion.