Back to the future is  the key for the studios 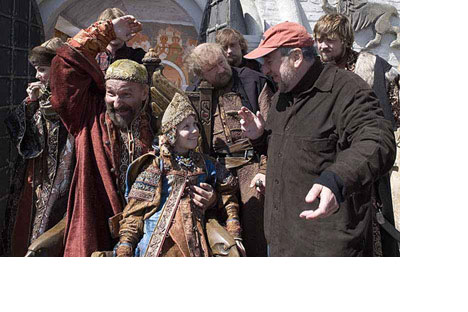 Russia’s film industry has blossomed in the past decade and, despite recent waverings, is poised for both artistic and financial growth. Both art-house and action films are flourishing.
After a decade of anticipation, Nikita Mikhalkov’s sequel to 1994 award-winning Burnt by the Sun, Burnt by the Sun 2, was a major source of disappointment when it opened earlier this year.

Laden with anvil-sized symbolism, the film revives the characters – a colonel, a KGB officer, and the love they both shared – thought to be dead when the first film ends at the height of Stalin’s terror.

Mikhalkov, compelling and controversial, was once considered a one-man film industry; while the art he has shepherded is in flux, business is booming. Russian filmmaking has experienced a dynamic revolution and restored reputation in the past decade. The past two years have proved a little troublesome, but the industry is poised for growth.

“Some of the expectations of the past five years could not and have not been met,” says Stephen Norris, Russian historian at Miami University and author of a forthcoming book on Russian cinema.

“But at the same time, a lot of the huge strides the industry has made since 2000 have held.”

The gains that have held include hundreds of cinemas in swish new malls in Russia’s urban centres. The revival in the Russian movie business that started in the early 2000s is regaining some of its stride.

While directors may now look twice before taking on patriotic blockbusters after Mikhalkov’s recent stumble, Soviet-era directors and art house films have made a small but promising comeback.

Films in recent years, from Andrei Zvyagintsev’s haunting The Return, to Kira Muratova’s macabre The Piano Tuner, have shown a return to Russia’s real cinematic strength – its Soviet-era avant-garde.

Some of Russia’s most popular films in recent years have shown an overt nostalgia, critics have noted, but that trend may be on the wane. “There is a certain wariness developing toward using cinema as a way to discuss national identity,” Norris says.

More interesting is the reassertion of the values of the Soviet-era avant-garde among directors, he adds. Among Russia’s best directors, one can see an assertion of the less populist and more cinematic principles of the great Russian masters, from Eisenstein to Tarkovsky.

Ironically, it was the collapse of the Soviet Union that brought the Russian movie juggernaut almost to a halt, with just 13 Russian-made films released in 1997, when total box office sales amounted to a paltry $6m. Over the next decade, the number of domestically produced films increased.

Then in 2004, the vampire cult classic Night Watch grossed more than $16m. It was followed by a procession of top-grossing Russian films, such as Company Nine (soldiers in Afghanistan during the Soviet invasion) and Turkish Gambit (a detective story set during the Russo-Turkish war) in 2005.

Revenues fell sharply in 2009, as dozens of projects languished, but the Russian economy has picked up ahead of expectations and people are going to movies again.

The re-emergence of Soviet directors is also the result of good business: in the Nineties, there were no theatres to show their movies in; now there are 1,900. However, art films still have distribution difficulties, despite international critical acclaim.

James Cameron’s Avatar almost single-handedly boosted first-quarter 2010 ticket sales by 73pc from last year, and its success, along with Alice in Wonderland and How to Train Your Dragon, shows how the investment in new theatres, including 3D, pushed the market in Hollywood’s favour.

US films may have benefited the most from the business boom, but Russian producers made up half of this year’s top 10.

That earning power, coupled with state support for the industry that began in 2002, has led to bigger-budget movies and encouraged international studios to get in on the act.

Mikhalkov’s disappointment could lead other directors to rethink the formula of recent patriotic films. If blockbuster producers take interest in any of Russia’s significant avant-garde directors, the result could be a winner – all the way to Cannes.