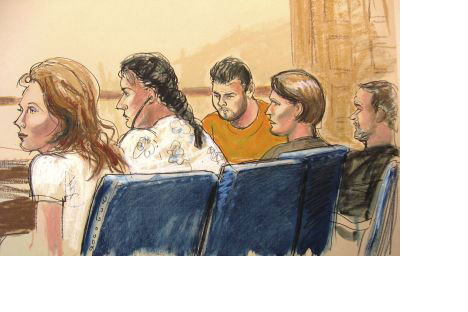 Reuters news agency quoted the official police representative as saying that the man, identified as Robert Christopher Metsos, was detained in Larnaca Airport as he was trying to leave for Budapest.

The Associated Press news agency reported that Metsos was a Canadian citizen.

Soon after the detention, Metsos was released on $24,000 bail and a pledge to show up in court within the next 30 days for extradition hearings.

The man was declared wanted by Interpol for alleged complicity in the recently uncovered Russian spy ring in the US.


Аmerican special services reported on Monday that they had detained ten people over charges of illegally gathering information for Russian intelligence. The people were denied bail and are currently facing jail sentence of a maximum 25 years.

Some of the suspects lived calm family lives and raised children. Their neighbours were shocked at the news.

“I was here when the FBI took them,” neighbour of a suspected couple, Stanley Skolnik, says, pointing to the yard near the house in New Jersey where two of ten alleged Russian spies were detained. “The little girl was in the house, the older girl was at the party or something. They brought her back and then a few minutes later the woman working for FBI escorted them out with their bedding and stuff and I think they went to their friends’ house to be sheltered there.”

The neighbors say the Murphys moved into the neighborhood two years ago.

The elder son of arrested Vicky Pelaez says his mother and her husband are “absolutely innocent”.

Waldo Mariscal is working as an architect and his parents’ arrest has come as a surprise to him. Waldo said that “his parents are engaged in culture, journalism” adding that “they have never been to Russia, though they are interested in Russian culture and like Tchaikovsky.”

And others believe the El Diario print reporter is being targeted for her critical stories surrounding US policy.

“This situation is very hard because, despite the fact that she writes harsh columns against the American government, on top of everything, Vicky is a outstanding person, she is a college graduate, she is a Peruvian like me. And of course this situation affects us because we value her,” says Vicky Pelaez’ colleague.

Mikhail Lyubimov is a former KGB officer who served for years in the Russian secret services in Britain and Denmark.

He says the whole story looks more like the work of spy fiction and has nothing to do with real under cover work.

“How can you imagine that eleven professionals didn't notice that secret services had been watching them, as they say – for years!” he asks. “If not them – their wives could have noticed! And so far it's not clear at all – exactly what secret information they've been looking for and what were they supposed to have sent to Moscow directly to the Kremlin, Medvedev or Putin! It’s nonsense! And I don't even talk about invisible ink – I remember the Bolsheviks loved it!”

With the scandal breaking out just days after President Medvedev's successful visit to the US, Mikhail is sure – this is a ploy to spoil Russia's image.

But if so, who could be behind it?

“It's a PR campaign by the US's secret services to get more money for next year's budget,” Mikhail Lyubimov believes. “They can say: you remember that operation with eleven spies? We did that! And they make these operations catchy ones to attract people's attention. It happens quite often that the administration and the secret services are conflicting. This could be the case.”

The former secret service officer says that back in Soviet times the response to something like this would have been very different from that of today, with the consequences much more serious for both.

A typical tactic would have been tit-for-tat arrests of Americans.

“Russia could have arrested ten photographers, US tourists for instance who've been taking pictures at the Black Sea and say they were interested in Russia's fleet there. Everybody would have believed it,” Mikhail Lyubimov says.

But with Moscow and Washington saying they hope the row won't affect relations between the two, it's clear old tactics are no longer an option.