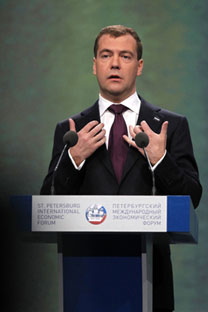 The 2009 St. Petersburg forum was held during the peak of gloomy expectations about the crisis, but this year it was marked by a more optimistic mood, although a range of views were expressed.

President Dmitry Medvedev played the role of the cheerful and optimistic clown, while Finance Minister Alexei Kudrin played the sad clown, and Rusnano chief Anatoly Chubais took a middle position. They differed not because they expressed various views about the same thing, but because they spoke about different things altogether. Chubais said the situation in Russia would soon change for the better, while Medvedev declared that it had already improved. Kudrin focused exclusively on the bad news — a rising retirement fund deficit and an inevitable increase in the retirement age, as well as an imminent increase in excise duties on gasoline, alcohol and tobacco and the higher prices that would result from them. It was noteworthy that Medvedev’s lofty words were directed at the business community, whereas Kudrin’s comments were intended for ordinary Russians.

Medvedev’s speech was marked by the dreamy, high-sounding slogan: “We’ve changed.” The first announcement that everyone focused on was that the capital gains tax on long-term direct investment would be lowered starting in 2011. Medvedev also announced that he had signed a law that reduced the number of strategic enterprises from 208 to 41 and reduced the number of so-called federal unitary enterprises from 230 to 159. Presumably, this will open up new opportunities to invest in enterprises that were once restricted to private — and especially foreign — investors.

During Soviet times, the government reported its achievements on the anniversary of the October Revolution, but now the most important news is saved for the president’s major speeches.

It hardly matters that the decision on strategic enterprises had been lying on the president’s desk for almost six months, or that the government had already put some of the firms up for privatization in 2010. Among the firms removed from the list of strategic companies were the Baikal Pulp and Paper Mill, 14 airports — including those in Nizhny Novgorod, Samara, Yekaterinburg, Novosibirsk, Murmansk and Anapa — as well as 22 ports and 11 shipping companies. But there is no guarantee that the state will actually relinquish control over them in the end. It might choose to simply transfer ownership to other state holding companies. Without a system in place or a plan for further action, Medvedev’s announcements at the St. Petersburg forum will likely not go very far.

Medvedev appealed to investors to invest money in the Skolkovo project. “The creation of favorable conditions for investors is perhaps our most important task,” Medvedev said during a speech at the forum.

But this appeal was met skeptically by many participants. For the past two years, Medvedev has been trying to fight corruption with new laws and measures, but there is little evidence that it has decreased. Corruption continues to kill investor interest in Russia, and this only underscores how meaningless Medvedev’s announcements really were.

Nikolai Petrov is a scholar in residence at the Carnegie Moscow Center.