Moscow Should Not Play by NATO’s Rules 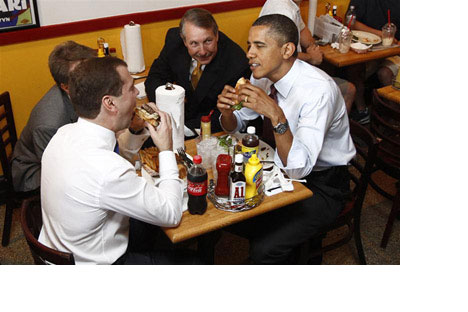 Today, relations between Russia and the West focus mainly on the “reset,” as well as cooperation on modernization and Western investments in Russia. This is a welcome change from the Cold War rhetoric of the past years under the administration of President George W. Bush. But unfortunately, we are not seeing real, substantive changes in the West’s approach to Russia. The glossy images of Presidents Barack Obama and Dmitry Medvedev smiling, eating hamburgers together and slapping each other on the back are good photo ops, but they remain superficial.

Many in the West see the reset as just another way to secure Russia’s support on issues critical to the West without seriously reconsidering strategy toward Russia. For these “pragmatists,” the reset is mostly a one-way street. The NATO Parliamentary Assembly meeting in late May in Riga was a vivid example of the West’s pragmatic approach to Russia.

“Let’s keep our powder dry!” exclaimed Bruce George, the head of the British delegation, as the meeting concluded.

Some thought that it was a joke, but as the Russian saying goes, every joke is half true. The truth is that 13 years after the founding act between Russia and NATO was signed in Paris, there is much more suspicion than trust between the two sides. True, some progress has been made, but it seems to be limited to joint programs of tactical importance — for example, Russia-NATO operations to save sailors in the event of a crisis on the seas. But when it comes to strategic goals, the two sides are worlds apart.

I was the Russian side’s chief speaker at the Riga meeting, and it was clear to me that Russia and NATO are still very much speaking different languages.

The first difference is the attitude toward NATO’s eastward expansion. The 2010 Russian military doctrine, approved by Medvedev in February, states that NATO enlargement constitutes Russia’s main external military danger. This opinion is shared by most Russians, who were galvanized by NATO’s efforts to offer membership to Ukraine and Georgia.

NATO Secretary-General Anders Fogh Rasmussen dismisses Russia’s concerns as “old thinking,” but he should pay more attention to the valid reasons why NATO expansion is still considered a threat to Russia if he is serious about promoting partnership between Brussels and Moscow.

NATO expansion created the political divide between Russia and the West that we are facing today. It buried the hopes of the early 1990s that the European continent would no longer be divided by walls, physical or political. Thus, former Soviet leader Mikhail Gorbachev’s romantic idea of a “common European house” failed to come true.

To be sure, the Obama administration has put NATO’s eastward expansion on the back burner. But this is only because he does not want to spoil the prospects of further cooperation with Russia on pressing U.S. foreign policy issues, such as Russian support for sanctions on Iran and transportation corridors to Afghanistan through Russian territory. Obama’s seemingly softer stance on NATO expansion, however, does not mean that the problem has disappeared. In fact, at the Riga meeting, Rasmussen repeated once again NATO’s commitment to an “open-door” policy for new members.

NATO often speaks of itself as an “alliance of values” — one that promotes freedom and democracy. But if NATO wants to present itself this way, it should ask the citizens of Ukraine whether they want to join the alliance or not. The answer is well-known and has been confirmed in many polls: The majority of Ukrainians do not want membership.

The second problem is the propensity of Western leaders to point to Russia’s “old thinking” in every possible situation. If, for example, Russia claims that NATO is not just a political alliance but a military one as well, NATO calls this “a Cold War mentality” on Russia’s part, despite the fact that the alliance has started two military campaigns in the past 12 years — in Kosovo and Afghanistan. What’s more, NATO’s military capacity in Europe is four times greater than Russia’s. The military budget of the leading NATO member — the United States — is 10 times greater than Russia’s.

In answer to these concerns, Rasmussen always says, “NATO will never attack Russia.” But Rasmussen is missing the point. The potential danger that stated in the Russian military doctrine is not NATO militarily attacking Russia. The potential danger for Russia is the creation of a strategic framework in Europe that undermines Russia’s security and national interests because it brings NATO military infrastructure closer to Russian borders, and it creates a NATO-centric system of collective security without Russia’s participation.

Arrogance is not a good foundation for establishing a new relationship. When NATO accuses its Russian partner of “old thinking,” it presumes that its own thinking is completely modern. But is it? While Obama refrains from these statements, quite a few Western leaders, such as Rasmussen, all too often speak of Russia’s “Cold War mentality.”

Or recall former British Prime Minister Tony Blair, who loved to accuse Russia of “not playing by the rules.” Whose rules did he have in mind? And who exactly established those rules? Was Blair playing by the rules when he, together with Bush, initiated a military campaign against United Nations member without cause and in violation of the UN Charter. Ironically, Blair’s “rules” have not been accepted by its own nation. He was ousted from Downing Street and will be most remembered for how he deceived his own citizens.

When asked in Riga about the purpose and motives of placing roughly 100 U.S. Patriot missiles in Morag, Poland, which is located 80 kilometers from the Russian border, Rasmussen said, “I would urge Russia to forget old Cold War rhetoric.” What he really meant, of course, was: “Stop asking questions, accept whatever NATO does and unconditionally support the alliance on key issues such as Iran and Afghanistan.”

In the face of very difficult global challenges, both sides should move toward a new thinking. A good place to start would be to develop a joint missile defense system in Europe based on shared information and technology and grounded in the concept of a truly pan-European collective security structure that will protect against common threats. Some U.S. officials promise that this joint missile defense system will be a “game-changer” in NATO-

Russian relations. But will it remain just a promise?

There is no such thing as universal truth — at least not in politics — and nobody can lay claim to possess it. The ghosts of the past are to be found not just in the Russian psyche. The West also needs to bury the past if we are to achieve a real, substantive “reset” and not a fake one. As for NATO’s call to “keep NATO’s powder dry,” this is definitely not a good example of the alliance’s “new thinking.”

Alexei Pushkov, who was a speechwriter for Mikhail Gorbachev from 1988 to 1991, is anchor of “Postscript,” a political show on TV Center, professor of diplomacy at the Moscow State Institute of International Relations and director of the Institute of Contemporary International Problems at the Diplomatic Academy of the Foreign Ministry.