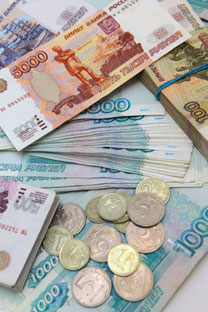 The currency's appreciation is "a real problem" for the economy because it cuts budget revenue, particularly from oil and gas sales priced in dollars, and makes it harder for manufacturers to sell their goods abroad, Pankin said.

"I can't say we support ruble appreciation — it's a real problem for the Russian economy — but still, it's inevitable," Pankin said. "Up to now, we have a more liberal capital control approach and we have no immediate plan to introduce any kind of capital restrictions."

The ruble is benefiting from oil prices above $70 per barrel and growth prospects in Russia, which together with China, Brazil and India, the so-called BRIC nations, are seen propelling the global recovery after the credit crisis. The currency also may attract capital as investors look for alternatives to Europe's crisis-ridden debt markets.

Dedicated BRIC equity funds had their best week since early March during the seven days through Thursday, attracting $772 million, a report by EPFR Global showed.

Russia has "stood out" within the emerging Europe, Middle East and Africa group of markets as it "has been aggressively cutting interest rates and sells plenty of dollar-denominated commodities," EPFR said in an e-mailed statement Friday. Funds investing in Russian stocks receiving $124 million in the past week, it said.

The ruble may gain an inflation-adjusted 20 percent in the next three years against the currencies of Russia's major trading partners, a government report said this month. It closed little changed against the greenback at 31.10 in Moscow, sliding 0.3 percent in the week. The currency depreciated less than 0.1 percent against the euro to 38.25.

When oil prices rise, the ruble strengthens and the Central Bank needs currency flexibility to fight inflation, Pankin said. The Central Bank plans to gradually allow it to trade freely.

Russia wants the ruble to be one of the world's reserve currencies as the country seeks to reassert its economic influence after last year's recession. The ruble should gain reserve status as Brazil, China and India also seek increased roles for their currencies, Pankin said.

"It's inevitable and it's necessary to raise the number of reserve currencies," Pankin said. "It's a market requirement that it's not only a dollar-euro basket."

Russia, which holds the world's third-largest currency reserves, would consider including the yuan, real and rupee in its reserves, should those governments lift currency restrictions and make them fully convertible, Pankin said. The Central Bank already said it might add the Australian and Canadian dollars to its international reserves.