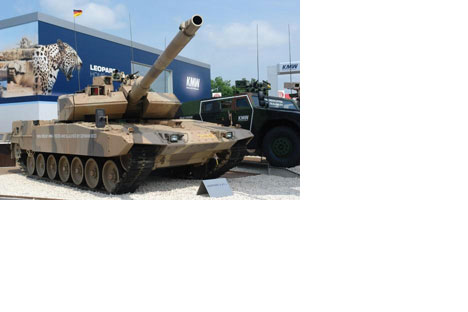 Among the many novelties featured at the Eurosatory-2010 international arms salon in the French capital, only the Russian exhibit caused a real sensation.

The Zenit Design Bureau, based in Zelenograd outside Moscow, demonstrated an active system to protect helicopters against modern anti-aircraft missiles, including US-designed Stingers. Russian designers have accomplished what no one else in the world has managed to do.

Scientists and engineers have been wrestling with the problem of countering missiles that home in on heat-producing targets ever since infrared self-targeting warheads first appeared. The first solution was simple but effective: heat decoys were used to deflect the missiles. That trick worked for a while. Today all combat planes and helicopters have devices that fire flares if threatened by a rocket attack.

Such fireworks make for a spectacular display during air shows and parades. But the flares cannot protect an aircraft against American Stingers, let alone our Igla (Needle) rockets. Over the years, rockets have gotten smarter. New generation anti-aircraft missile control systems instantly select the target from among all the light objects in the sky and guide the rocket towards the moving target, be it a plane or helicopter.

In the mid-1990s the US announced that it had created a complete system for protecting aircraft against heat-seeking, self-targeting missiles. The system, with the mysterious name Nemesis, apparently includes radars that scan the airspace, lasers, classical heat traps and light jamming devices. Allegedly, the US president’s plane is protected by this impenetrable defensive system. Nemesis probably exists, but more likely than not only on Air Force One. At any rate, over the past fifteen years the device with the mythical name has never been publicly displayed.

Russia, by contrast, has shown its anti-aircraft missile defense system to the whole world. The missile, designed and built by experts in Samara, Moscow and Zelenograd, has a unique optical-electronic jamming device developed by a team led by Professor Alksandr Kobzar.

For promotional purposes, the device has been referred to as President-C. The device is currently displayed at Rosoboronexport’s stand under this “modest” name. At its heart is an optical-electronic jamming system, a metal ball about half a metre in diameter. The keys to the system are found inside the ball, which are driven by unique mathematical algorithms employed in the control system’s software. The mathematics involved were developed by experts in Samara and Zelenograd and constitute unique Russian know-how.

The system is shown in action on a large video screen. The target, a Mi-8 helicopter with its engines revved up to full power, is fixed on a tower that sits on a hill. Beneath the aircraft’s tail, three balls are attached. An operator carrying a shoulder-fired Igla rocket chooses the best position for attack, behind and to one side of the helicopter. The range is minimal for a helicopter, 1,000 m. The light from the engine nozzles is clearly visible in the rocket sights. Fire!

The rocket heads for the helicopter in a nearly straight line. Suddenly, myriad flames start dancing around the helicopter. It is a sight you have to see to believe. Where only seconds earlier the helicopter and the heat from its motors were clearly visible, a blinding cloud emerges consisting of small flames, mini-lightning and something swirling that makes one think of the special effects in the film “Avatar”. The missile, as if scared, veers off course towards self-destruction.

The USSR conducted comparative tests of American Stingers seized in Afghanistan and Russian Iglas built in Kolomna. Our missile outperformed the American one. So, if Igla missed the target, protection against Stinger is assured.

Professor Aleksandr Kobzar, Director General of Zenit, had this to say:

“Our missile uses directed and specially modulated radiation from a special kind of sapphire lamp. It creates a phantom target in the missile guidance system, which its electronic brain takes for the real target. An other-worldly virtual reality mesmerizes the missile and lures it away. The missile veers into empty space, where it self-destructs in due time. The fiery cloud around the helicopter is the optical effect of a very powerful sapphire lamp. It sounds very simple, but we alone have managed to solve this ‘simple’ task and put it into a workable device.”