Modernisation as liberty for businessmen 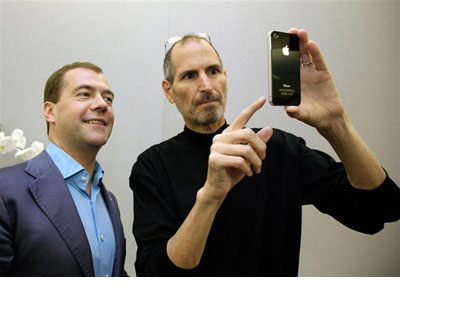 Following a long conversation about technology investments and startups, a colleague of mine remarked: “He knows what he is talking about.” This is a real compliment from the usually cynical representatives of Silicon Valley’s venture world. For me, it was very important to see the change in my colleagues’ attitudes toward Russia’s prospects and investment opportunities. It is not just the meeting with the president that made the difference, but also meetings with Russian businessmen: we saw the quality of these people. Personal contacts reveal people’s attitudes much better than news reports.

At that meeting, President Medvedev said he would come to Silicon Valley, and he followed through on his promise. He arranged for a meeting with Russian expats in Silicon Valley to be as informal as possible, partly by inviting representatives of small companies. There were no formal dress requirements and the meeting was held not in a posh restaurant, but in a small Printers Cafe opposite Yandex Lab in Palo Alto.

During the talks, the idea of opening a Russian representative office in Silicon Valley was discussed. I told the president that much of our business is done through informal exchanges, where we discuss our problems and find common solutions. This is where video link conferences come in handy. During our conversation, I drew up a schematic plan for the cooperation between the Skolkovo technopolis and the planned Russian office, on a table napkin. It includes three major phases of development: preparing the concept, designing products, and finally, sales and marketing. If we are in constant touch with Skolkovo, we will be able to do more than simply discuss problems, but also find solutions. Mr. Medvedev took the napkin, promising to consider the plan. Looking for solutions in an informal atmosphere, on a napkin, is a common thing in Silicon Valley and I think the president appreciated it.

Ways to stimulate innovative business, including the culture of options, practiced in Silicon Valley, were also discussed at the meeting, along with intellectual property and the business climate in Russia. In particular, red tape in Russia was defined as an important obstacle for business development. My impression is that President Medvedev is paying special attention to the development of private business in Russia and the removal of any barriers.

An important approach to the problem is the Skolkovo project, touted as Russia’s Silicon Valley. This comparison is not quite correct, as Skolkovo is planned as a springboard from which Russia can leap over the barriers of its outdated system. An independent judicial system will be created, based on the rule of law, with due respect for international business practices, and state-of-the-art technology will be put in place. Even more importantly, opportunities will be created for talented researchers and businessmen to deal with innovations and new commercial projects.

Given the Russian practice of comprehensive state control, some observers are skeptical about the project. First, modernisation “from above” won’t work, they say, arguing that the government should provide the necessary conditions and stimuli and step aside, allowing businessmen to develop their projects as they think best. Second, the new approach will need to be expanded in the future, with Skolkovo’s concept and innovative infrastructure covering the entire country, from Kaliningrad in the west to Vladivostok in the Far East. Third, real competition is needed, especially in the area of monopolised public services, if new reforms and modernisation are to take root and corruption to disappear.

In his time, US President Ronald Reagan realised that heavy taxes were a major obstacle to investments and new commercial initiatives. Similarly, President Medvedev sees Russia’s clumsy bureaucracy and corruption as serious problems hampering the creation and growth of young hi-tech companies. Much like the United States, Russia has sufficient resources and intellectual talent. The current system requires a serious rethink and strong political will will be needed to secure its modernisation. Reagan’s economic policy triggered one of the longest periods of economic growth in modern times. Lower capital gains taxes played a key role in boosting high-risk technology investment. It is too early to say whether Medvedev’s initiatives in Russia will have a comparable effect, but the first steps have been impressive.

At the international economic forum in St. Petersburg last week, President Medvedev proposed the revolutionary idea of exempting long-term innovative projects from the capital gains tax starting from 2011. Perhaps Mr. Medvedev will be the one to propel Russia’s hi-tech industry to the international level. In his time, Tsar Alexander II freed Russia’s serfs. Can President Medvedev now liberate Russian businessmen?

I think Mr. Medvedev is well prepared for this daunting task. He understands new technologies and he also understands and values the law. He worked in business and understands the role that the human factor plays in it. He understands that business has a special culture, which must be nurtured and sustained in Russia.