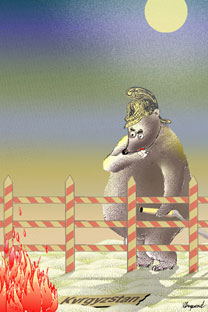 The Kyrgyz crisis also highlights the difficult choice Russia will have to make: whether it should or should not intervene to help settle the flaring conflict.

The turbulent events in Kyrgyzstan, touched off by the toppling of the clannish and corrupt government of Kurmanbek Bakiev in April demonstrate just how volatile the local authoritarian regimes are – they appear to be still going through the tortuous period of post-imperial readjustment almost 20 years after the collapse of the Soviet Union.

But Russia is also haunted by its imperial legacy. The fact that Russia was an empire for a major part of its history is something which cannot be emphasised enough. For a huge land-based empire, protecting its long and often porous borders is a security issue of paramount importance. In fact, constantly expanding its outer periphery, absorbing new lands and creating buffer zones is a set of policies that a land-based empire usually resorts to in order to make its vulnerable frontiers secure. This strategy was also a key factor behind the continental empire’s territorial growth: the same pattern brought Russia into Central Asia in the middle of the 19th century and has kept it there ever since.

Although, unlike the Soviet Union, Russia is no longer an imperial state, the former continental empire finds it infinitely more difficult to disengage from its former colonies than maritime empires do. The interpenetration of the imperial metropole and colonial periphery is much more intimate and intensive in the first case. Even after the demise of the empire, territorial contiguity leads to a situation where many challenges presented by the former colonies should be seen and analysed not only as phenomena exclusively pertaining to the sphere of foreign policy, but also as factors directly affecting the domestic situation in the former imperial center.

Russia’s principal concern in the region remains the preservation of the internal stability of the Central Asian nations. Any local turmoil that might potentially be caused by a botched succession crisis or the escalation of political confrontation by resurgent Islamists challenging the region’s secular regimes or by inter-ethnic clashes is going to be viewed by Moscow as a direct threat to Russia’s own stability and security.

Making stability their top priority, Russian policymakers are intent on keeping the local regimes afloat by trying to contain the advance of Islamic fundamentalism and prop up the region’s secular authorities. But these two sets of policies appear to run at cross purposes – Moscow is going out of its way to support those regimes which are, in effect, secular dictatorships: they are clannish, corrupt, repressive and utterly averse to any kind of democratic reform. With their political base remaining very narrow and claims to legitimacy rather flimsy, the Central Asian regimes are potentially very brittle (as Kyrgyzstan has demonstrated in 2005 and again this year) – with the ever more alienated and impoverished populace becoming increasingly radicalised.

Yet Russia, fixated as it is on the struggle against “terrorists” appears to be completely unprepared to deal with any kind of large-scale political turmoil caused by the rising popular discontent and the growing Islamization of the region. Arguably, the Kremlin finds itself in a trap of its own making: for Russia, the only way to make the region truly stable is to be able to act as an agent of change, as a force for genuine modernisation, cautiously nudging the local authoritarian regimes to transform, democratise and broaden their socio-political base. But the nature of Russia’s own political regime effectively acts as a brake on this progressive kind of policy. As a result, Moscow is compelled to act rather as a conservative force, which seeks to forge ties with the local rulers and back up those regimes that appear to be geopolitically loyal to the Kremlin.

The repeated collapse of government in Kyrgyzstan (seemingly the “weakest link” among the region’s authoritarian regimes) appears to indicate that Moscow’s previous policies toward Central Asia have been deeply flawed. Now, as the death toll in Kyrgyzstan mounts and the number of refugees fleeing across the border into neighbouring Uzbekistan rises steeply, Russia is faced with a painful policy dilemma. As Russia has long been casting itself as the main provider of security in the post-Soviet space, the Kyrgyz crisis appears to represent a moment of truth when Moscow has to deliver. All the more so since the hapless leadership in Bishkek openly acknowledged that it had lost control over the situation and directly appealed to Russia for aid, asking for peacekeeping troops to be urgently sent in.

If Russia doesn’t step up to the plate, referring, as it recently did, to the crisis as an “internal conflict”, it risks losing face, prestige and the right to claim the leading role in the post-Soviet Eurasia. Yet, finding the most appropriate way to intervene is not an easy matter. Given Uzbekistan’s wariness of any Russian move in the region, the Kremlin seems to understand that any deployment in Kyrgyzstan is conceivable only within the framework of the Collective Security Treaty Organization.

However, if Russia does decide to get involved into the Kyrgyz imbroglio, it will face different kinds of problems – not unlike those the US-led coalition is currently grappling with in Afghanistan. After all, today’s Kyrgyzstan is a failed state: its interim central government is extremely weak, lacks legitimacy and depends heavily on external aid, while the impoverished population is suffering from a deepening economic crisis and is harassed by local thugs, criminal kingpins and drug barons. On top of that, the country is divided along ethnic fault-lines – particularly in the southern regions where the sizeable Uzbek minority is concentrated. The continuing inter-ethnic violence in the south of Kyrgyzstan risks undermining the already precarious stability of the entire country and, in the worst-case scenario, the stability of the neighbouring countries as well.

Given the stakes involved in any of the policy options, the choice Russia is facing is tough indeed.

Igor Torbakov is a senior researcher at the Finnish Institute of International Affairs.