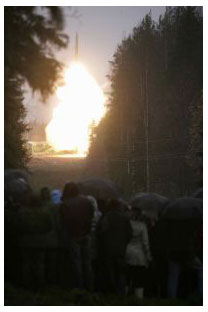 It’s a dream factory and a haven of cinematic geniuses. Film icons and masterpieces were born and bred in Russia’s Mosfilm, the largest and oldest film studio in Russia and Europe. From Eisenstein’s Battleship Potemkin and Romm’s Pychka, to Tchoukhraïs’ Pure Sky, to Kontchalovski’s Uncle Vania and Tarkovski’s Solaris, Mosfilm has seen it all in its glory days. The experimental workshop, founded in 1924, had by the start of World War II become the first complete studio in Europe, combining a cinematographic village and a production company. And now Mosfilm, that owns rights to hundreds of Soviet-era classics, has defied challenging circumstances, including the global recession, to reinvent itself into a hub of modern Russian cinema.

“Today, we are at the forefront of the industry and have no reason to be envious of western studios,” says Karen Shakhnazarov, producer, entrepreneur and the president of Mosfilm who has shepherded its rebirth ever since he took over the management in 1998.

The dissolution of the Soviet Union endangered the very existence of this cinematic enterprise, but Mosfilm managed to retain much of its sturdy, old infrastructure intact. Now, the new managers are putting those priceless assets to new use, thus generating new streams of revenue in the process. The recording and soundtrack mixing studios (one 6300 m3 room, for example, can accommodate an orchestra of 150 musicians) were designed by European specialists and are equipped with the latest technologies. This enabled a diversification beyond the cinema. “50 per cent of our work is recording music albums,” states Andreï, a sound engineer.

A jewel in Mosfilm’s crown is the recreation of a Moscow district at the turn of the 20th century that includes paved streets, stone and wood façades, lamp posts and period street signs. The “Old Moscow” stage has been used since 2004 as a set for more than 40 movies, changing into St. Petersburg, Tbilisi, Copenhagen or any other historical city, as needed. The only downside is a skyscraper, built on the opposite side of the street, which limits shooting to close shots or forces the use of special effects.

The dazzling diversity of period costumes and antique cars are added attractions and source of revenue for the studio. Sergei Plohov, head of the costumes and accessories department says that the studio has more than 400,000 pieces of clothing and military uniforms. In those Ali Baba-like caverns, tens of thousands of objects, from all periods, hang in disarray. The undisputed stars of the luxurious second-hand goods are the retro vehicles: a 1913 Rolls Royce, a 1928 BMW 321 and a 1927 Packard as well as other vintage buses and tractors. The most famous cars, objects and costumes are displayed in the studio’s museum and are no longer used for filming. Anyone, however, can rent a costume by the day and be a pirate, a Red Guard or tsarina. Costume rental is one way of making ends meet at the end of the month.

The film library is simply priceless and is being used to finance new creative ventures. Riding high on a new entrepreneurial energy, these films have been digitised subtitled in English and made available to the public for a few euros either on a per item or flat rate basis in a virtual video collection that will eventually offer 2,500 old and new movies.

The global recession hit the Russian film industry. Mosfilm, too, felt the pinch, reducing its once prodigious output to merely 40-50 films. Denied of public funds, Mosfilm produces mainly television series sponsored by private money. These are large scale projects, “not peanuts”, insists Shakhnazarov. “The movie industry is being rebuilt,” says a proud Shakhnazarov. Now, we only have to find wealthy producers and talented scriptwriters, he says dreamily.

The man who minted Mosfilm anew

The modern avatar of Mosfilm is the creation of Karen Shakhnazarov, a producer with 13 films under his belt. He took over the studio’s management in 1998. In 1983, he was widely acclaimed by the public and critics for his lively musical comedy, “We are the Jazz”, portraying the difficult beginnings of the jazz scene in the USSR of the 1920s. His last movie, Room Number Six, is an adaptation of Tchekhov’s eponymous short story and a profound artistic reflection on psychiatric hospitalisation.