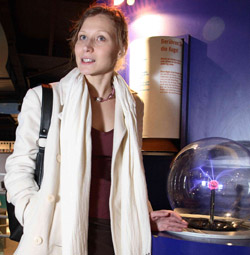 When Irina Shreyber, 30, talks about some of her life's greatest passions, - elementary particles, dark matter and the Large Hadron Collider, her eyes beam. Shreyber, a native of Arkhanghelsk, a town in the Northern Russia, is a physicist at the European Organization for Nuclear Research (CERN).

She is not by far the only female Russian scientist who works at this mammoth research center located on the French-Swiss border and known for one of the modern science's most ambitious, expensive and sensation-prone experiments: the Large Hadron Collider. A scientific Babylon and a colossal international lab boasting some of today's most advanced facilities, CERN hosts 8,000 visiting scholars (80 percent of the Center's entire staff) from 85 nations and 580 institutes and universities from around the world. As post-Soviet Russian science continues to face a number of problems, mainly due to the lack of research funding, CERN has become a dream workplace for the country's aspiring physicists of all ages. An estimated 200 scientists from Russia's top nuclear physics research institutes are employed there full time today, and more than 876 collaborate with CERN on the visiting basis. Several generations of female Russian physicists are part of the trend as well.

"Women are very curious by nature, so a woman physicist is not so different from a woman in a humanities field," said Irina Sheyber with a quick smile when asked what it's like to build a career in the area of science that in Russia and many other countries is still largely dominated by men.

A graduate of the Physics and Mathematics faculty of the Moscow Institute of Steel and Alloys and the Institute of Theoretic and Experimental Physics, Shreyber has been at CERN for more than four years. She transfered here from Fermilab, a large Chicago-based particle physics research center where she had moved with her husband, also a physicist and her fellow student back in Moscow.

"It's not easy being a physicist in Russia, Shreyber said, stressing that she doesn't consider going back to her home country."The scientists' salary is low there, and opportunities are few," she said.

Living in the heart of Europe adds to the appeal of working at CERN. "Geneva is a really fun city, very cosmopolitan," said Shreyber who, shortly after having arrived at CERN, divorced her Russian husband and is now dating a German physicist. She said they are already thinking of having a baby in the near future.

"I'm already 30 years old, so it's just about time," Shreyber said. "But I hope to be able to work until it's time to give birth. At CERN, it's not that hard, one can work from home and there are kindergartens just next to our labs."

But more than anything, Shreyber enjoys doing research in particle physics which she called "the most beautiful science in the world."

"Everything, including humans, consists of particles," she said. "The more we know about the latter, the more we can grow and create."

Another physics rising star, 24-year-old CERN researcher Olessya Shchutska, also feels much more satisfied studying and working abroad. "I am shocked by how aggressive and unhappy people are in Moscow, especially in the subway," she said. "It's so different from Western Europe where everyone is relaxed and
everything is in order. You get used to this very fast."

A native of Ukraine, Shchutska graduated with honors from the respected Moscow Institute of Physics and Technology. Regarded as a physics wonderkind, she got accepted there without having to take the exams and started participating in graduate-level research projects during her junior year. Like Shreyber, Shchutska laughed off the possibility of having a science career back home.

"It's tough in Russia, and even worse in Ukraine, so forget about it," she said.

Now a graduate student at the Ecole Polytechnique Federale de Lausanne, Switzerland, Shchutska does research for one of the Large Hadron Collider projects and dreams of making a "life-altering discovery" some day.

"Every physicist desires to win a Nobel Prize," she said, smiling.

Still, not all gifted Russian scientists have an opportunity to come and work at CERN. Pauline Gagnon, a physicist at the Large Hadron Collider ATLAS project who also does research on the female employment at CERN, noted that, although during the last 15 years the Center's female staff has been increasing every year and now makes up 21 percent of CERN's entire staff, Russia has still far fewer women scientists working there than most other countries. According to Gagnon's 2008 study, only 6.7 percent of Russian researchers collaborating with ATLAS project were women, compared with 15.6 percent of women on ATLAS overall. The main obstacle, she believes, is the lack of resources in the post-Soviet sphere that may affect both the quality of the prospective scientists' training and the opportunities to travel and self-support while being based at CERN.

"Most of my Russian colleagues were working outside their universities to make ends meet, their professor salary being really too low to allow them to survive on it," Pauline Gagnon said. "It means they have less time to give their students, and talented young people are probably choosing other careers since academic careers are so badly supported by the government. What we see here is a small group but many are kind of left behind," she said.

Others in the field are more optimistic. Lidya Smirnova, a physicist on shift at ATLAS and Pauline Gagnon's longtime colleague, notes that the situation has improved compared with the early 1990s, when the collapse of the Soviet Union caused the near-elimination of the major financial supports for the scientific community.

"There are more younger people in Russia going into physics these days, and the funding is getting better," she said.

Still, it seems that those aiming to have a successful career in science strive to come to places like CERN.

"One of my students, a talented young girl, is now here in Switzerland doing research," Smirnova said. "She's very happy to be here - in Russia, her researcher's salary there would just cover commuting expenses."

A Moscow State University professor with the Ph.D. in particle physics and a mother of two, Smirnova comes to shifts at the ATLAS project several times a year. She said she, too, feels really lucky to have this opportunity, calling CERN "a really cool place with a nice open-minded atmosphere."

"It's really comfortable to work here," she said. "You've got the access to all the information you need, and, of course, they pay you well."

Tatiana Karavicheva, a physicist from the Moscow-based Institute for Nuclear Research of Russian Academy of Sciences, who has been living between Moscow and Geneva for the past 20 years, agrees. "CERN is a unique international community, a really stimulating environment and a beautiful location as well," she said.

Karavicheva supervises ALICE, one of the Large Hadron Collider's most challenging projects, a gigantic magnet detector weighing 10,000 tons, which aims to recreate and then study the matter conditions that had purportedly existed nanoseconds after the Big Bang. An ardent believer in the power of science, Karavicheva insists that within the next decade, CERN's experiments will lead to discovering the major mysteries of the Universe.

"The fundamental questions remain unanswered," she said. "Where does the matter and mass come from? Where did the antimatter go after the Big Bang? Isn't it amazing to be able to go back to the beginning of Time anyway?"

Karavicheva, who sports a radiation detector next to her name badge, takes an elevator 100 meters down to the 27-kilometer circulent LHC tunnel several times a week to check on the machine's segment's. She laughed when asked about the health risks from working at the site with potentially high radiation.

"The unknown always seems scary, but here, everything's under control," she said. "Every time my son comes to visit and brings my grandson, a toddler, along, we all go down to the Collider — when there're no collisions taking place, of course, she said. "My grandson loves it. He says we've got a really tasty hot chocolate here."

For some women scientists from Russia, CERN has become a permanent home. Elena Chapochnikova, an accelerator physicist and a section leader in the LHC Beams Department, and her husband, a physicist-theoretician, came to work at CERN in 1991 after the funding at their previous employer, Moscow's Institute for Nuclear Research linear collider project, had ended. Both were part of the first wave of the Soviet "brain drain." Experts estimate that in the years that followed the fall of the Soviet Union, more than 80,000 talented scientists total left Russia for the various research centers and institutes in the West. For the first seven years, the physics duo who have been together since their student years at the Moscow State University Physics and Mathematics Faculty, traveled back and forth. In 1998, they finally settled in Switzerland. Chapochnikova got a permanent position at CERN and her husband found a tenured teaching job at the Ecole Polytechnique Federale de Lausanne. Now the couple, who have two kids in their 20s, own Swiss passports and a quaint house in Neon, a picturesque town located between Lausanne and Geneva.

"Our kids loved it here, so we decided to stay," Chapochnikova said.

Asked if female physicists are treated differently in the West compared to Russia, she said that in Europe, everyone's "treated equally." "Back in Russia, a woman in the particle accelerators field was definitely a rarity: I had often been the only girl in the group and certainly enjoyed all the attention," she added.

Even so, Chapochnikova and many other ambitious female scientists from Russia and from across Europe agree that a good pay and a beautiful location, flexible work hours, the availability of kindergartens even for very small children in addition to state-of-the-art facilities and abundant resources make CERN a singular place to successfully combine an exciting scientific career and personal life.